Do Bilingual People Act Differently Depending on the Language They Use? 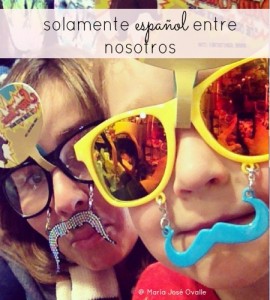 There is never a dull moment in this bilingual home of ours. Each day my husband or papi is getting better and expanding his vocabulary to more than just “caca” or “leche,” and my son incorporates words he has heard me say into his conversations with me — things he would only get from me. Not my mamá or his tata. For instance, when Lucía was crying he said “me carga cuando llora la Lucía.” Carga being the new word, one that I use probably too much. But he took me by surprise.

I don’t know why, I decided to test my son out. I’d never done it before, but I gave him orders in English. I said “hurry up and get in the car, we have to go now.” He stopped, stared and said laughing nervously “mami, nosotros no hablamos en inglés.” I kept going in English and suddenly I noticed he had tears in his eyes and he just looked scared. I changed back to Spanish and said “Perdóname. ¿No te gusta cuando te hablo en inglés?’ And he said something that took me by complete shock, “Cuando tu hablas en inglés es como que no eres mi mami”.

Talk about a total surprise! Then he followed it up by saying “Y la Lucía llora en español por que todavía no habla.” Wow, wow, WOW!

Then I remembered years ago when my grandparents came to visit us from Chile, my Oma had commented that I was a different person when I spoke Spanish than when I spoke in English. She said my tone of voice was softer and comforting whereas in English it was harsher and less “feminine” (her words, not mine!) It also happened in London, I was speaking with a client in English only to find out later he spoke Spanish as well. He said I was a completely different person when speaking Spanish, again he  mentioned something in the tone of voice. Now I’m no expert, but it makes sense.

I think language and personalities go hand in hand. My entire mamá-hijo relationship has only been in Spanish so to suddenly change now just scared my little guy. Pobrecito, it broke my heart to see the nervousness in his eyes.

What do you think, do you sound different when speaking different languages? Is it a confidence or fluency issue?

Week in Links for #BilingualKids — June 1

Bilingual Musings: Mami, Do You Speak English?
Maintaining Spanish at Home When Your Child’s Exposed to Only English in School
Developing My Emerging Bilingual Daughter’s Sense of Language
12 Comments

Absolutely – so many things are different for me depending on which language I’m speaking, so much so that I ended up asking an expert about it and gave him permission to quote me. (I’m “Bilingual #1″ here: http://www.psychologytoday.com/blog/life-bilingual/201111/change-language-change-personality)

As for your little guy getting upset when you spoke English – Awh! Pobrecito! … It’s so interesting what he said – that it’s like you weren’t his mami when you spoke English. This was a HUGE hurdle for me when I started to speak to my boys in Spanish after having conducted ourselves primarily in English their whole lives — It felt like we were other people – that there was a wall between us – and my boys rebelled against it for a time. It felt funny, awkward for all of us, like being actors on a stage, rather than being a mother and her sons…. It’s been years since I started trying to speak more Spanish to my boys and things aren’t awkward anymore but I still remember so clearly how it felt back then and it makes me cringe.

haha, i usually speak in english to my kids, but i can definitely see how spanish makes my voice sound feminine.

A few years ago we had an exchange student from the Dominican Republic. He told me the same thing “you are nicer in Spanish than in English”. I think it is because of the tone of the words.

Here in Ireland even though our native language (Irish) has all but died out it is still taught in every school right up till the end of high school. Some schools here in fact are Irish only – all subjects are taught through the Irish language and the students must speak only in Irish during their school day. My 9 year old son attends one of these Irish speaking schools. In order to help him practice and improve his Irish I have on many occasions tried speaking Irish with him at home only to be completely blanked by him. I had never considered that it might be my change in character or tone that has put him off speaking Irish with me at home! Very interesting post.
Joe.

I think it makes sense. I had never been told anything like that but I can see how I would sound different. I know a lot more words of endearment in Spanish that come naturally to me. And I use a lot of them with my kids and when speaking in Spanish in general. Sometimes when I am addressing my monolingual (English) niece and nephews I feel fake because I am not used to speaking lovingly to small children in English. It just doesn’t come natural. So I think I would definitely sound “nicer” in Spanish.

I can’t consciously speak to my kids in English. I feel fake. But I have done it without even noticing it if I was already speaking English with someone else. But my son has never commented on it. Maybe he doesn’t notice it either?

Something I do know though, is that I do not like the sound of my voice in English. I have heard voice mail messages I have left and it doesn’t sound like me!! haha In my case, I do thing is a confidence issue.

Hi. Recent research has told us that bilingual babies and toddlers can not only ‘code-switch’ the words of a language but they can also change the physical forms of the mouth and throat which produce correct pronunciation, so why not intonation too?
Anecdotally, only last week a friend heard me speak in both languages and concluded I spoke in a higher key than in English. “Higher as in more frantic?” I asked. “No” she said “higher but lighter”.

Hi, I definitely feel different when I speak French as opposed to English, which is my native language. I feel more confident and am more forthright – more “French” perhaps. My son doesn’t seem to notice the difference/be upset by it though. I do speak to him in French occasionally, when I need someone French-speaking like his dad or half-brother to understand too.

Indeed I’ve been told also (and I notice) that I sound different when speaking French, English or Spanish, which I think is normal as all languages have different intonations but also different way of expressing things and seeing the world (culture, ideas)… One major thing I notice for example is that an English person who is angry/upset will sound more frightening/severe than a French-speaking (Belgian in my case) or Spanish person (of course, this is just a general observation, which will depend on the person too). I also express things differently depending on the language I use.

I adored this article and I this a topic that I won’t ever stop exploring. I think most of the previous comments all raised valid points. There are many factors at play – association, culture, energy…I guess perhaps even the time in your life that you learned the language and how you learned it. I have been told that when I speak English that my voice is deeper and when I speak French it is higher pitched. I have not been speaking Spanish for very long but it seems that my tone is more coy and cutesy. I wonder about it all. I find it all so interesting. I have not had the occasion to speak in French and Spanish in front of my family members – but I am so curious to see what they have to say about the way I sound and express myself in these languages

my husband talks 10 different languages. I noticed that his body language changes depending of which language he is talking. He is very rigid when he talks Chinese, but he is really relax when he talks Portuguese or Russian.

In my case, I know that I am very polite an sweet talking in English, I do not make jokes, or laugh to often while is kind of the opposite in Spanish. I am not funny in English!!!!!!!!!

good site!! You could start many more. I love all the info provided. I will stay tuned.

Are you coming to STL? Laughter required. I have seen ALL of your performances when you have been here!!!!