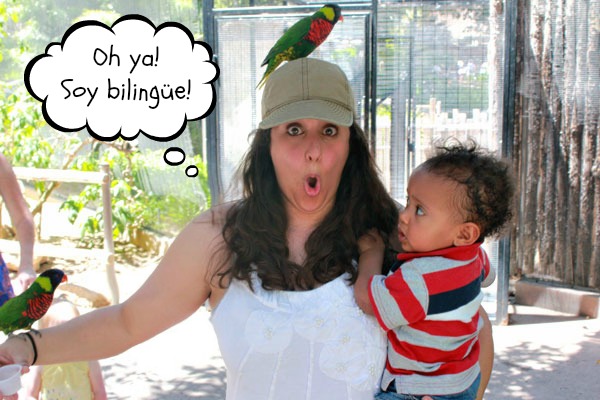 Living in a monolingual household with no family near by, in an environment with less diversity than I care to admit, there are days where I utter not a syllable in Spanish. With my oldest child, now 3 years old, Spanish immersion was regimented with specific rules — I cooked in Spanish, I narrated the TV in Spanish. But now, with two kids under 3, there are no rules. There is only survival. And even in English, some days I hardly manage to survive.

Online, in communities like the one we have here, is where I find my center — the core of my identity that remembers what its like to be bilingual and feel bilingual on a daily basis. Even still, I miss that feeling — the innately human characteristic of manipulating your larynx to create a word and connecting it to your brain to send a message. Doing so in more than one language just adds another element of identity.

Spanish is the language of my grandparents and of my ancestors before them. Spanish is what I used to whisper my farewells to my great grandmother, as I held her hand and she drifted on to the next life. Spanish is how I remember my Papi, speaking to me in his quick, sharp tone, always affirmations of his sometimes angry love. But I live in English, and yes, sometimes I forget that I’m bilingual.

Forgetting that you’re bilingual is essentially forgetting a part of who you are. Losing a bit of your identity because you aren’t paying enough attention to who you once were, and maybe, who you want to become. Forgetting is easy, but once you’ve forgotten, you remember. And then, the growing begins.

Upon a quick Mother’s Day road trip, I remembered I was bilingual. And not even a little bit bilingual, but a lot bilingual. As I found myself in situations communicating with Spanish speakers, strangers and passer bys, the inner most part of my identity emerged to do what I love to do — talk! Learn through experience! And communicate with those around me to form connections and community.

It was the strangest feeling, but it made me so happy. Akin to riding a bike, even when my heart had forgotten that I was bilingual, my body did not. Without even a second’s hesitation, I was making jokes, giving directions, all in Spanish. The look of awe and pride in my daughter’s eyes made the experience that much more memorable. Her mamá is bilingual.

Sometimes we all need gentle reminders, I guess.

Do Bilingual People Act Differently Depending on the Language They Use?

It’s uncanny…I think I have the opposite problem. I live in a bilingual household where my wife, sister-in-law and live-in suegros are bilingual. A wonderful opportunity, right? Well many of you know my story, but for others…keep reading:

After attempting to learn spanish, on my own, “off the streets” for the last 3 1/2 years, to communicate with my wife’s family, the results have been…well, none too impressive. It’s been extremely difficult to learn in a city (Las Vegas) where language learning and networking is outright terrible–and this is a city with a large spanish population. In the multiple ways I’ve attempted to learn and have learned HOW to learn as an adult, I’ve succeeded in being able to somewhat write/speak/read it, but comprehending/listening is a totally different animal. My comprehension is extremely poor.

It’s been very difficult to engage in spanish two-way conversation with my wife, despite my multiple attempts to either code-switch or make outright attempts to engage. 99% of our interaction is in English, which makes this difficult. And despite our baby that’s on the way (due in July), in which she says that I will probably learn more once she’s born, I suspect it will be comical once that happens.

My suegros, on the other hand. can understand it, yet our conversations are extremely limited. My suegra speaks to me in broken english periodically and I will attempt to respond in spanish. My surgro speaks to me in spanish only, which is good, except it hinders interaction and conversation. Often times, my wife will need to translate, and if she’s not around, 90% of time, i will not understand what he’s saying or he will have to painstakingly attempt to tell me in English.

Where does this leave me? A lot of silent moments at the breakfast/dinner table or in the car or at family events, unsure if we’re bonding or not. A lot more wishing we could bond more but the language wall is getting larger, not thinner.

Your story reminds me of the issues my step mom had in her marriage to my father. She would always say “I just listen for my name”, which made me sad. Everyone seemed so disconnected! She felt like attempting to speak Spanish was entirely out of her ability, so kudos to you for maintaining that desire to learn. And honestly, since I know you better than just through SB, I think you are a little too hard on yourself. My bilingual skills have a huge emotional dependency on how confident I’m feeling. It’s astonishing the level of bilingualism I exhibit when I am speaking among my family versus in other situations. I almost freeze for fear of looking dumb. So, relax. Don’t stress so much. You’re doing great! Keep chatting and making mistakes. The level of your bilingualism doesn’t define your work ethic or your identity as an amazing dad and husband, so don’t beat yourself over making mistakes. And keep your head up for loving your wife and little girl enough to put worth this great effort!

Come visit me in L.A. and and I’ll make sure you get plenty of Spanish out!

Ana, I may take you up on that offer. I’m in L.A. about once a month, actually was there this
Past weekend for our baby shower. Friend me on Facebook: http://www.facebook.com/erik.huey

Vanessa, I think I’m hard on myself because I went in with a false sense of my
learning going to be easy (I’m an adult learner, this is easy, I got this). Yeah, right.
Turns out that this has been the hardest thing I’ve done. What’s weird is that I’m a
communicator for a living. And yet, I can’t communicate in my own house, around my
suegros. Communication is impossible at times. You make very good points that make
perfect sense. I do feel disconnected, yes. I’m hard on myself because I want to
communicate & bond with them. They’re the parents of my wife & the grandparents of our
future baby. I guess it means a lot to me to try to bond with them despite the language wall.

Thanks for reminding me how important it is to be bilingual. Living in Canada, I speak English almost all the time. I often forget to speak Spanish, which is my mother tongue.

When people see smoke from my electronic cigarette,
I see them flinch away and then they ask what is that wonderful smell.
Pen Preference E-Cigarettes-140mm – 160mm: These are the real style
of e-cigarettes offered by Chinese a restricted years ago.

Awesome blog! Do you have any suggestions for aspiring writers?
I’m planning to start my own blog soon but I’m a little lost on everything.
Would you propose starting with a free platform
like WordPress or go for a paid option? There
are so many choices out there that I’m completely overwhelmed ..
Any suggestions? Thank you!