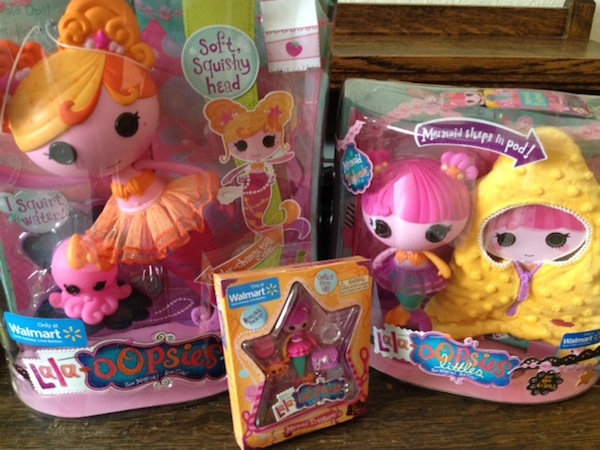 My daughter Vanessa is not a fan of the Lalaloopsy dolls because their button-eyes remind her of the movie Coraline, which she’s only seen parts of because it scares her to death. So I wasn’t sure how she’d react to the Lala-Oopsies we recently got from Walmart.

Well… it turns out I don’t know my daughter as well as I thought!!

I first gave her Treasure, the Mini Lala-Oopsy Mermaid doll you see in the photo above, which comes with a tiny see-through purse, a treasure chest, a harp and a cute little pet crab — and Vanessa thought it was the cutest thing in the world. So I moved on to the larger doll, a mermaid called Opal, whose tail changes color when submerged in cold water, and my daughter ran for a pair scissors to free her new doll. 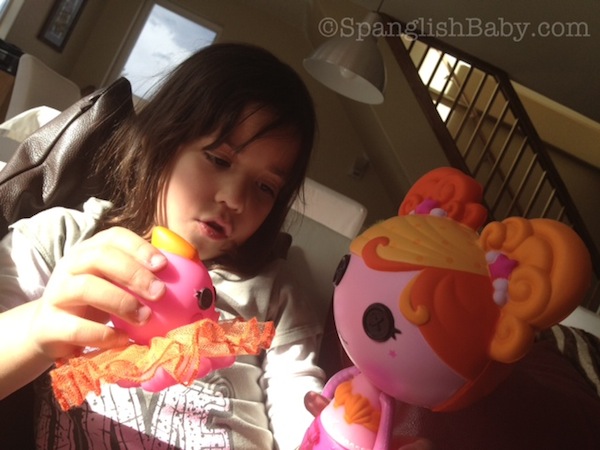 As a lover of all things pink, I know Vanessa’s favorite part was that all her dolls were pink with a bit of orange and yellow. She also loved their squishy heads, but she thought it was funny they didn’t have noses.

Finally, I told my daughter the dolls also came with a movie “Lala-Oopsies: A Sew Magical Tale” — a Walmart exclusive — and she was thrilled. The movie’s all about a magical, secret place where all Lala-Oopsies live, including ballerinas, mermaids and fairies and the lengths they have to go to save their homes when something happens to the strawberry milk that powers their land.

Transitioning From English to Spanish Reading

An Easter Egg Hunt in Spanish!
Look at All the Back to School Clothes We Got for $100!
With Scan & Go You’ll Never Shop Any Other Way
2 Comments

Today, while I was at work, my cousin stole my apple ipad and tested
to see if it can survive a thirty foot drop, just so she can be a youtube sensation.
My iPad is now destroyed and she has 83 views. I know
this is completely off topic but I had to share it with someone!