Transitioning From English to Spanish Reading 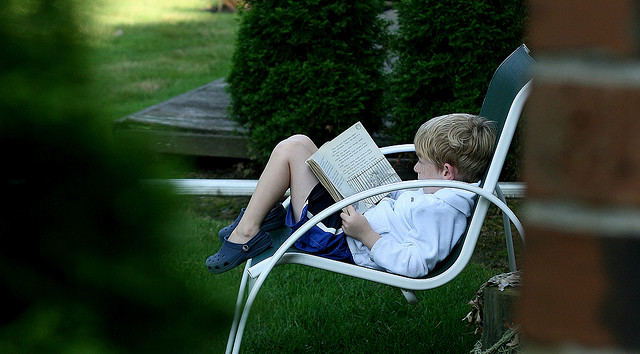 My son Isaiah LOVES books, much like Roxana’s daughter. However, he is a bit younger (just turned 5) and is still learning the fundamentals of reading in English. Since starting at a Montessori preschool last fall, he has made leaps and bounds in his reading abilities and has a good handle on the basics. In addition to his English homework and the reading exposure he gets at school, I read to him in Spanish and English every day. I’m a little stumped, though, about helping him cross the barrier into a full-blown Spanish reader as he has done in English.

We have a bit of a reversed situation from many of you, or at least those of you who use the mL@H method. As I’ve previously explained, my son gets most of his Spanish exposure at his father’s house, and has therefore decided that, at least conversationally, English is his language of choice at my house. So we speak mostly English except with extended family, listen to almost exclusively Spanish music and radio, and read in both languages. I don’t have quite the advantage that some may have in terms of using Spanish vocabulary on a daily basis with Isaiah and then finding it in our books. If he’s not getting the Spanish reading reinforcement at school, how can I indicate to him that reading in Spanish is just as important/interesting and is not going to be a chore?

Other than the encouragement factor, my big roadblocks are the logistics. Montessori schools don’t use phonics as some of us may have learned them. They use a multi-sensory approach, and that’s how Isaiah has grown to understand how letters make sounds, sounds make words, and so on. I can’t exactly replicate his Montessori practice in Spanish at home, so will teaching him the traditional phonics-only way serve to confuse him? I’m unsure of whether I should wait until he has completely mastered English reading before I confuse his sounds with another alphabet.

I have experimented a bit with simple Spanish board books to see if he adjusts his vowel sounds, etc. when he knows the book is not in English. I’ve found that he first tries with the English sounds, though (such as “eh” for E instead of “ay”). That’s when I start to wonder if I’m doing more harm than good…i.e. replacing the sounds he needs to know for school with the Spanish phonetics or just risking making reading a frustrating endeavor.

I’d love to have some feedback about your experiences with preschoolers or kindergarteners and learning reading in two languages. Although I know it can happen simultaneously, would there be a benefit in waiting until Isaiah is at a higher level of English reading before I have him dive into reading to me in Spanish?

The Many Ways Ballet Nurtures My Daughter

Reading in English and Translating into Spanish… at 5 years old!
English Books Be Gone!
3 Simple Ways to Expose Your Baby to Spanish Before He’s Born
11 Comments

Hi Chelsea,
My son also attends a Montessori school and we’ve found a lot of online resources for teaching Spanish using Montessori methods. We’ve got a movable alphabet with the print letters in Spanish, since at school they separate English and Spanish in the kids minds as print and script with English in cursive. Sebastian has had a little confusion initially, but he quickly worked it out. We have also been working through the Silbario and Coquito books with him, since Spanish isn’t really phonics in the same way as English, it is syllable sounds and both of those lay the syllable sounds out really well as foundations in reading the Spanish language. Be very clear with him that each language has very different rules and that he has to apply them accordingly. Best Wishes!

I’m teaching two little girls Spanish and would love to know what websites you recommend Casey! Especially using the Montessori methods! Thanks in advance!!!

Some people do believe that you should wait till the child has stronger reading skills in the first language before beginning to teach them to read, but I don´t! I would say start right away. I actually think learning to read the “montesorri” way works better in Spanish than it does in English. I am not extremely experienced in this, but I think kids learn the sounds first in Spanish, and not specific letter names. (I have said this before how all the English teachers at my bilingual school hate how the students come to 1st grade and have no idea how to say the name of any letters!!) They work with Ma Me Mi Mo Mu and then can start reading right away. Mi mama me ama! I would say the best thing you can do is read read read with your child and then maybe start to point out the different sounds. He should catch on in no time as reading in Spanish is much more straightforward than reading in English.

I am not familiar with the Montesorri method but from my experience, Spanish is easier for them than English, he is not going to have a hard time reading in both languages, keep us posted!

I agree with the others. Do both! He is already exposed to Spanish as a spoken language. He will learn to read it with time, if exposed regularly. Keep up the good work!

Thanks for the post, am about to dig into this myself!

Thanks, everyone, for the great advice. It’s helpful to hear that it may be easier than I think it will be to introduce the Spanish reading. I didn’t learn to read in more than one language until high school, so it’s hard for me to relate to the seamless process it probably is for a 5-year-old.

My son is also 5, and I am not a native Spanish speaker either. I have had success with him reading “early reader” books in Spanish (I have found a few on Amazon). They have very short words and sentences, and if it is a longer word (“locomotores” in the “Feliz Cumpleanos Thomas” book) I just cover up the syllables to help him sound it out. It’s so much easier than when he tries to sound out that crazy English! I feel bad for him when he is so sweet and writes out, “I luv you.” Phonetically, it should be spelled that way (he knows “you” as a sight word)! I haven’t corrected that one yet because I don’t want to hurt his little feelings. But anyway, just try to get him interested in it, but don’t push. Mine isn’t that interested either. It might be a boy thing. I intend to work on him with writing letters and reading in Spanish this summer, since he starts kindergarten in the fall and will be swarmed with English! He may have some instances where he gets confused between languages, but I think it will be very short-lived when you consider how long he will actually be in school. Thanks for posting this, and thanks to previous commenters for those links! I’m going to check them out.

Actually, would you all mind sharing the sites that you use to teach phonics en espanol? Thanks!

We are monolingual parents raising a fluent-as-a-native trilingual/triliterate child, so I understand your concerns. I had read that it is best to learn to read well first in your native or strongest language and add the second language reading later.

That is what we did and it has worked out wonderfully with both her Spanish and Mandarin Chinese. We kept reading to her in Spanish, but did nothing with reading and writing in it until she was very fluent in those areas in English.

We started all three languages when she was in the womb ( even read a Spanish and English book to her daily starting at 3 months pregnancy when they can hear and start to develop language). We’ve also used travel and local schools ( in Spain and Asia) for even more immersion and learning the language/literature like locals do.

She is 12 now and it has worked amazingly well for us and she still reads daily in all 3 languages.

My daughter is 3 and is starting to read more fluently in English. I’ve dabbled a bit with teaching her reading in Spanish as well, but really I’ve been more focused on her English right now, as I think that’s the harder language and she’s so interested. I have heard that once a child understands how phonics works, for phonetic languages they can apply those skills easily enough to other languages. She sounds out words in Spanish on her own sometimes, but it’s less common than the amount of time she spends reading on her own in English. I suspect in the next year she’ll start reading more in Spanish on her own. Right now the plan is to remember to point out Spanish words to her while we read and follow her lead.

This site is a little cumbersome, but there are easy short books that you can print out that my daughter loves reading/coloring. Some of them are translated into Spanish, you just have to look around. http://www.hubbardscupboard.org/winter_sight_word_booklets.html