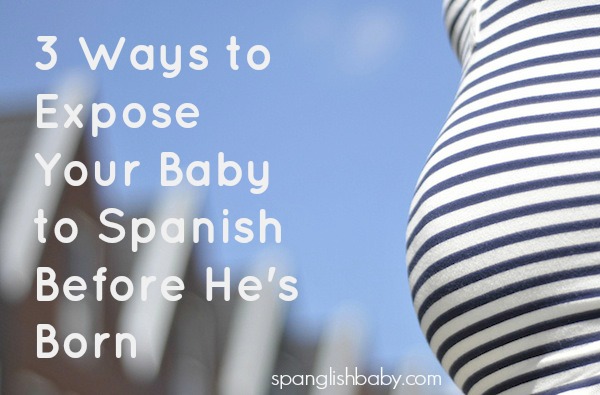 As a first-time expectant mother the list of things to think about, prepare for, rejoice in and even panic over seems to be endless. It feels like every day not only brings you closer to holding your bebecito in your arms, but also takes you on that magical roller coaster of new emotions.

When my belly started growing with my little girl and I started talking more and more to her, I realized that I also had the additional burden of figuring out if my Mexican-born husband and I should speak to her in our native language of Spanish or in English. En la casa sólo hablamos español, so I knew that it would be very odd for my husband and I to switch to English with our daughter — it just wouldn’t be natural for us. At the same time, we knew English would be the language she’d absorb from her environment no matter what we did, but we still wondered if that would confuse her.

We weren’t alone in our fears that being exposed to multiple languages early on could confuse our baby. We did later find out that our fear was based on misconceptions and lack of knowledge. The scientific fact is that the earlier we start exposing babies to a second language, the more flexible their bilingual brains will be and the more they can identify and separate the sounds of the different languages they are exposed to.

The first window of opportunity to expose babies to multiple languages is during their first year of life (and even starting in the womb!). Babies should be exposed through rich interactions to the two languages at home so their brains can absorb all the sounds and retain them by the time they turn a year old and this window starts to close.

So, as you get ready for your baby’s much-expected arrival by checking out tools like Huggies Respuestas de Mamá and the very useful Guía Bienvenida a tu Bebé, you should also think about the many ways you could expose your child to as many languages as possible. His brain is wired for it, the rest is up to you. I like to say bilingualism is a gift we give our children that no one can take away from them. Plus, if you start immersing them in Spanish right now, they won’t be able to complain or rebel against it — it will just be a natural process.

While raising completely fluent bilingual kids is a commitment and takes a real conscious effort, there are relatively simple ways to kick start the baby’s language exposure even before she’s born.

1. Talk as much as you can. Talking to your baby in the womb and as a newborn is one of the best ways to bond with him. He’s getting used to your loving voice and it gives him comfort. If you or your partner speak Spanish, make sure that you speak it to him a lot. Talk about anything, sing, read, recite a poem — ¡lo que sea! What’s important is that he’s absorbing the sounds of the language and recognizing them from you.

2. It takes a village. Start scoping out your family, friends and community and see who can also provide the necessary language exposure to your child. Abuelas and abuelos that speak Spanish are such a blessing to have. Make sure you make them aware of your wishes and have them become your bilingual accomplices.

3. Stock up on Spanish-language books, toys, music and games. If you’re still being showered with gifts or just starting to plan your registry, make sure you also include some books, music and toys in Spanish to start building your immersive and fun arsenal.

Share: When did you start exposing your child to Spanish or your second language? How did you do it?

Why My Daughter’s Doctors Must Speak Spanish

Bilingual Babies: The Sooner, The Better
My baby speaks a multitude of languages for now…
5 Essentials to Successfully Raise a Bilingual Child
18 Comments

Yes! I tried to speak only Spanish to my baby during my pregnancy, I am convinced he understands!
Xochitl

He does!!! And it’s a great tip for parents using the OPOL method when the dad is the one that speaks Spanish so he can read or just blabber to the baby bump in Spanish!

Great post, Ana! I’ve started to talk to my babies as early as I could feel them. I was in the commenting mode a lot of time: “Mommy is going to go for a walk” or “Let’s go get something to eat” or “You are so active today, my baby”. Singing to them was a big thing too!

Thanks for the note, Olena!
Love the “commenting mode”! It’s definitely a good idea to just talk to them anything that comes to mind. Reading and singing also work

I’m looking forward to trying this with my little one when he is here. My only concern is that I will be the only one speaking Spanish to him because Dad only knows English and a little bit of Greek – the same goes with the family that we have near by. Also, I hope baby will not be confused when I speak English to dad. I hope my speaking Spanish to him mostly will benefit him, that way he’ll be ready for Nana when we visit them.

You’ve got a great plan in place already and it’s very effective. It’s known as the One Parent One Language (OPOL) method and it works really well if you stick to it.
Make sure your little one (felicidades!) thinks you can only speak Spanish to him. If you do this consistently starting now, it will be just the way it is for him.
He’ll quickly grasp that dad speaks English and you speak Spanish and he’ll sort it out.
It will definitely benefit him!

Muchas gracias! As I mentioned below, I was was feeling pretty confident, but there was always doubt in the back of my mind. This little guy will already grow up in a very diverse family – he will be Mexican Greek American and that is very exciting for me. We have already been preparing by buying alphabet blocks in Greek and Spanish and as many books as we can find even our favorite books that are in English. I’m looking forward to meeting him and starting this journey!

Be seen by those searching for you online by
being represented on the first page of major and local search engines.
In addition to this tactic, a good SEO business and its professionals give individualistic attention to each and every project.
Generally speaking, if a website’s goal is to monetize content that is not original
or high quality, then it is likely that the site has been targeted by Google.

Have a look at my homepage social media marketing Questions interview

When you sign up for HCG wholesale, you are registering for ultimate satisfaction. There
are a few things that must be identified about the HCG diet
plan and consequently a single really should not start off using them without having any assistance
of the homeopathic medical doctor. B vitamins include B-1, B-2, B-6, B-12,
pantothenic acid, niacin, biotin and folic acid.

Look at my webpage :: fat loss

Artificial baits include spoons, jigs, ribbon baits, rattler baits & streamer baits.
Connect “A’s” positive terminal to “B’s” negative terminal.
Here are the guild quests along with a handy location and
a listing of the reward for completion.

Comfort comes in the form of the beautifully upholstered reclinable deck seats and bow
seats, and a drive. If you like antiques you
have to ask for help- we have many but only the locals know where they hide.

Use your guam tar on the net trap and go at least two squares away from it.

My web site deck plans for above ground pools 24′

They come in all shapes and sizes, plus many come with attachments to
make traversing stairs even a piece of cake. Generally, two types of storage facilities available for
you, which are self storage and mobile storage.
Getty Center is renowned for its architecture, gardens,
and views overlooking Los Angeles. This is to indicate
all kinds of defects regardless of how simple or complex they are; way before the defects
result into serious problem. The Nissan Altima is a good choice among midsize cars.
Carpet cleaning in best can be done through any cleaning machine.

Many of these companies offer on-site shredding services
with the help of mobile California document shredding trucks.
The Makita provide Jobsite Radios to take away dull mood in your work place that quickly turns it into something delightful by choosing a good
background music that will suit you best. It has diverse cosmopolitan lifestyles offering different kinds
of foods, entertainment, night life, and festivals.

The companies are persistently good and this makes most
individuals seek for such shifting helps.

Before rushing into any financial decision, research all the options available and find
what payment option is best for you. When the bathroom
walls are crack or have been damaged the sink, the bathroom racks are no longer
helpful it is time to think about bathroom remodeling. An update sink fixture with great looking knobs can instantly update a plain and outdated kitchen counter and
sink area.

I also like that they are wrapped individually
so I may open the package and take out what I need without worrying about re-wrapping the rest to prevent freezer burn. Cooking and Picking
Crabs Before cooking, rinse crabs in freshwater, making sure they
are all alive. Fishing Lures For Sale:- The next time you’re rummaging through the garden shed it’s worth taking
a long, hard look at that old tackle box.