My Daughter Is Bilingual Thanks To Her Teachers 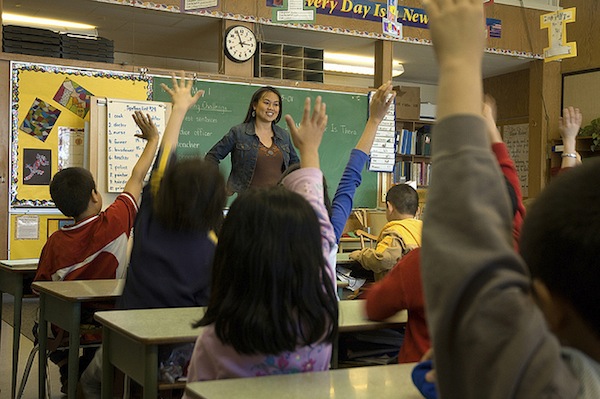 I would’ve loved nothing more than for Vanessa to have the opportunity to attend a dual language immersion program. Unfortunately, the options are few and far between in Denver, and after much debate and consideration, my husband and I decided our neighborhood elementary school was where our daughter belonged.

While I get a bit jealous every time I hear the amazing stories coming out dual language immersion schools, I’m convinced we made the right decision. Since Vanessa started Kindergarten last year, I have seen my daughter flourish in ways I never imagined. She has learned how to read and write. She has discovered math and science and believes both subjects are fun. Her curiosity has grown tenfold and her love of books has solidified. She has made a lot of friends and is excited to go to school every single morning.

But the one thing that has amazed me the most is to see my daughter become fully bilingual thanks to the amazing work of all the teachers she’s been lucky to have so far. You see, Spanish is the only language spoken in our house. It’s truly the only language my kids are exposed to when they’re not in school. While I like to say I’ve been raising bilingual children since they were born, I’ve been actually taking care of only one language: Spanish. And so, for all intents and purposes, my daughter owes her English — and thus, her bilingualism — to her teachers and her life at school.

I wholeheartedly believe that most teachers are unsung heroes. I owe some of my major accomplishments in life to a handful of exceptional teachers I was lucky to have along the way. Vanessa is only 6 years old, but she’s already been blessed with two dedicated and caring teachers at her elementary school who probably have no idea that Vanessa’s proficiency in English has been mostly their doing.

Whenever possible, I try to tell them how grateful I am for their selfless work. But in the wake of the unfathomable tragedy that struck Sandy Hook Elementary School on Friday, I’m making a concerted effort to thank them for being so instrumental in my daughter’s bilingual upbringing… and so much more.

Have you thanked your child’s teacher lately?

Week in Links for #BilingualKids — Dec. 15

Is Bilingual Kindergarten Right for Us?

My Bilingual Daughter’s First Year in an English-only School
How Truly Bilingual is my Daughter?
On Making Difficult Decisions
3 Comments

Thank you for this lovely post. So often you hear nothing but bad things about the teachers, the schools, the drop out rate, poor test scores etc. This was a very nice picture of the work that some teachers do, and that for many teachers it is their passion and love to work with children. This post was a great way to start my day, and I am also being thankful for the many wonderful teachers who have touched my life and those of my children.

Teachers are truly heroes, they do an amazing job working with our kids everyday, I honestly haven’t thanked them enough but I will, thank you for your post Roxana.

Your post came just in time for me. We have decided to switch Sabrina from a Spanish day care to an English one

We decided that Sabrina is Spanish-dominant thanks to me and my hubby (school reinforced it, helped it), but sometimes language should not be the 1st criteria to consider in day care options

Guess who can see what my next post will be about. It has literally brought me to tears this past week…..