A Gringa in Little Puerto Rico 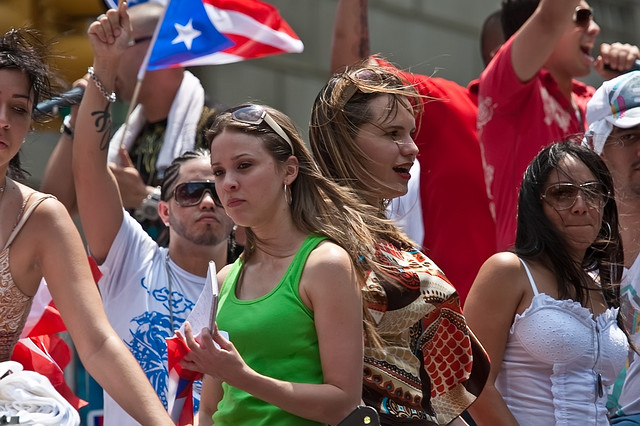 Living in downtown Orlando gave me some opportunities to speak Spanish, but it turns out that they were miniscule compared to the practice I’m going to get in my new neighborhood. A month ago, my family moved to the south side of town, closer to where I grew up. I feel comfortable living over here, everything we do is more convenient to our house, and we found a great Montessori school for Isaiah. I didn’t expect to be surprised by much, least of all the presence of such a large Spanish-speaking (mostly Puerto Rican) population. After all, they jokingly call this part of Orlando “little Puerto Rico.”

It has managed to surprise me, however. I officially feel like the minority, and my gringa status has brought plenty of questions to the surface already.

First, there are the countless service personnel who have shown up of late: the pest control guy, the cable guy, the refrigerator delivery guys, the lawn maintenance guys. All Spanish speakers, all assuming I speak Spanish when they read my last name but then immediately struggling to use English when they see a white woman answer the door. When I indicate that I do, in fact, speak Spanish, they respond in one of two ways: 1) use a few words of SLOW Spanish and wait to gauge my level of understanding or 2) take a full-on nosedive into a Spanish-only conversation and appear relieved to be able to use their native language.

The reason this has me questioning my mode of interaction is that sometimes I want to feel comfortable and not be the one doing the “work” of speaking a second language. If I reveal that I speak Spanish, then it seems a given that I MUST thereafter respond only in Spanish and sometimes struggle with vocabulary I don’t regularly use (anyone know how to say “weed eater” in Spanish??). If I don’t reveal that fact, I feel like I’m being disingenuous and rude for making the person fight to speak English.

Another situation in which I’ve found myself feeling surprisingly uncomfortable is when I’m in public and not really trying to eavesdrop, but I am. Por ejemplo, in line at the grocery store, when the cashier is speaking to the customer in front of me in Spanish. The other day, I got somewhat patronizing smiles as two women had a long (too long for the checkout line!) Spanish conversation about Hispanics and the election. The second I stepped up to check out, the cashier switched and said “Hello, how are you today?” I felt awkward having understood every word of her previous conversation, but she had no idea. There’s clearly no need for me to say that I speak Spanish in that moment, but I always feel a fleeting conflict. Especially if said conversation seems to be what’s making the difference between my picking my son up on time and showing up just late enough to be last in the car line.

Perhaps what I am truly dealing with is the ever-present tendency we have to judge each other’s ethnicity and change our communication styles accordingly. While this can be a great skill, there are times when it can backfire. I hope that the shock of finding out that I speak their language has made some of my neighbors think twice about assuming that gringos do not understand them or, more importantly, do not want to meet them halfway.

Is it too much for me to ask, though, for them to meet ME in the middle? Somehow, talking about drain lines and water bugs in Spanish feels harder than writing a college paper for Spanish grammar class!

What do you think? Should I feel obligated to speak Spanish just because I can?

Immersion Travel: Summer Camp in Puerto Rico
3 Tips to Avoid Giving Up on Spanish
Making Sure Spanish Is Not Lost By The Third Generation
10 Comments

It’s hard to say whether you should feel obligated. I do, but I’m in a different situation – a gringa living in Costa Rica. Spanish is the first and official language here, while it is not in Orlando. So I guess it’s up to you. But it were me, I’d probably speak Spanish if my Spanish were better than the other person’s English but speak English if his/her English were better than my Spanish. I’m all about being practical.

For what it’s worth, weed whacker is motoguadaña, at least in Costa Rica.

I like this rule, Erin. My only remaining question is what to say when people just bluntly ask “Do you speak Spanish?” and I don’t want to…I don’t feel right lying about it, but I know that if I say yes, that normally means the entire rest of the conversation will be conducted in Spanish.

That is usually how I decide whether to speak Spanish or English too. Basically whoever has the best of the respective languages. I always feel good if I speak Spanish to people who I know speak English and they don´t switch to English because it means I must be speaking ok.

Of course there can be all these little ingrained power struggles, assumptions, and stereotypes in these interactions. It also depends on my mood. Sometimes I feel proud to speak spanish to prove that I can do it, but sometimes Im just lazy and I will switch to English with a person who i know can speak English. Sometimes when I know a person is making a big effort to speak english to me even if it is barely intelligible, I will keep on speaking English to them to encourage them. I am a teacher after all.

I actually have a meeting right now where all the email interactions have been in Spanish, but I know he can speak English and even has a wife that doesn´t speak Spanish so he must speak English a lot. Im wondering what language the meeting will end up in?

You’re right about the fact that not switching to English could indicate that they think your Spanish is good! I like that feeling too. But I also sense that sometimes I’m being tested. (And, therefore, that my switching to English would be like telling them I really don’t speak Spanish like I say.) That weird dynamic, in addition to those power struggles and stereotypes you mention, makes it a touchy situation.

Who knew that being bilingual could create so many complexities in the way we conduct everyday conversations?

YOu have touched so many points with your post. I am in a similar situation where Dutch is the majority language, I am a native speaker of Polish, and also speak German and English. I also know some Dutch- enough to communicate. I sometimes feel the same way you do- I know that when I start speaking Dutch, the whole conversation will be in Dutch as well. I actually like the challenge of speaking another language. But if it’s something really important, I either speak English, or make sure that they can, just in case. I like your idea of meeting in the middle- after all, the majority of multilinguals switch between languages easily, so why can’t we do just that- Dutch (or Spanish) when we feel like it, or English if we don’t know the word or expression in the other language.
I also feel like this is a test- “how much do you belong here?”- it seems to me that ironically, your situation in a Spanish- speaking environment is similar to the one of a Spanish person living in an English-speaking environment.

Your situation does sound similar, Olga. I like your rule of speaking English “if it’s something really important.” I guess I have to trust myself as the judge of how important a particular conversation is!

Chelsea,
I think the advice given so far has been great. I would use which ever language makes sense in the situation, and would not feel avergonzada mixing in a few English terms for words I am not familiar with in Spanish…and vice-versa. The goal is communication – so I say do whatever advances that goal. The more you use your Spanish the more comfortable you will be.
I do not “look” like someone who would speak Spanish either, so I have often been in the situation where I feel like I am eavesdropping on a Spanish conversation without the speakers’ knowledge. That situation does make me a bit uncomfortable, and I am never quite sure what would be the polite thing to do (other than try not to listen….. but that never works!).

You’re right about mixing in a few English terms without feeling ashamed. There’s quite a bit of Spanglish going on in these parts…sometimes, it even confuses me more because I’m not listening for English words with “el” or “la” in front of them, but that’s exactly what you hear.

The funny thing about the comfort level is that for me, it has little to do with my ability to speak fluently. I speak Spanish at least once a day, and in some situations, for hours on end (with in-laws, etc). I don’t worry at all that someone can understand me or thinks my Spanish is good. It’s simply a matter of not wanting to be pressured into it, and feeling that it’s a bit unfair for me to always do the compromising in the direction of my second language.

Very interesting article and conversation! I grew up in Montreal, where we experience a lot of the same gauging of a person re: whether we should (or can) engage in French or English. And it’s political there, too. Here in LA, we’ve got our (very gringo) kids in Spanish immersion school and they will likely experience some of the same interesting issues you raise here. It’s very interesting!

Hi. I completely understand. We live in Denver with a huge Latino influence. Mi esposo (Mexicano) and I can be out anywhere in town and a paisa will speak to him en espanol. However, once they look at me with my light skin, blue eyes and it’s hello miss instead of hola senora. Then I’ve had the opposite happen with Americans who assume b/c I’m married to a Latino that I must be bilingual and can I translate for them. To note, I do speak Spanish (I just understand more Spanish than I speak at this point in my life). My answer is it’s complicated on what language to speak with someone and how to go about it during the first meeting. First impressions and the first language you speak with someone can impact your relationship. I guess go with what feels natural during the conversation. Most of my conversations with Spanish speakers are more Spanglish than Spanish.