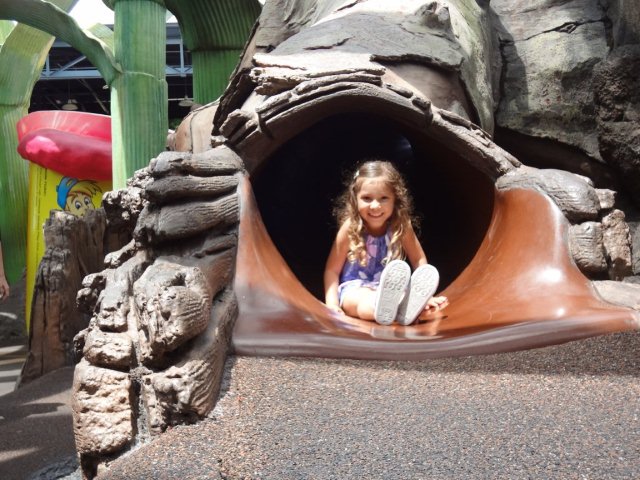 One of the the things that can put parents who are raising bilingual children off the most – aside from their kid not responding back in the target language – is when they start mixing languages. Our first thought is that our child is falling “behind” in terms of language acquisition, but nothing can be further from the truth.

My girl is almost five years old now and is very aware that she’s about to start a new stage in her life in a few months when she enters kindergarten in a dual language immersion program in Spanish. Up until now she’s been attending an English-only Montessori and speaking Spanish at home and with family and friends. What’s happened is that her language of play and of “academics” (ABC’s, etc) has been mostly in English. I do supplement at home, but she’ s not very open to learning with me. So now that we’re talking about how she’ll have teachers who speak only in Spanish and she’ll be learning to read and write in Spanish, she’s become oddly aware that she mixes languages.

I realized this last week because I had to take her to an assessment test for her new school where they would evaluate at what level she’s at with her letters and numbers in Spanish to help the teacher prepare class materials, divide the two classes, etc. I was preparing her for this by telling her she’d be speaking in Spanish and they wanted to know how beautifully she spoke. Then, she stopped me and very seriously said, “Pero yo hablo inglés, mamá.” Yes, she has a way of telling me these things in Spanish and utterly contradicting herself. I reminded her that she spoke Spanish really well and she just needed to turn on her Spanish brain chip  when there. Her response: “But I mix them.”

And she’s right. She does mix them, a lot.

What I loved about this conversation was the fact that she’s aware that she mixes the two languages. I’m not quite sure if this is something a teacher told her, if we’ve unconsciously mentioned it in front of her or if she just came to this realization all on her own. The important thing was to reassure her that it is okay, and it really is.

Mixing languages at this early age is just a phase and actually one that indicates she has a perfect grasp of both languages. What she does is considered one of the first phases of code-switching and experts agree it takes a well-nurtured bilingual brain to be able to master it. It’s not laziness or lack of knowledge of the languages, it’s just a natural phase in which she’s sorting out both languages and learning when and where to use each. Since English still dominates my girl’s language of play, it’s easier for her to switch to it when she’s playing hide-n-seek with me or when she’s explaining something that happens at school. She mixes in Spanish with me because she’s making a real effort to speak only Spanish and tries wherever she can. However, when she’s in school she pretty much sticks to English because she knows they don’t understand Spanish at all. Am I making sense?

Psycholinguist Elizabeth Lanza describes in her book Language Mixing in Infant Bilingualism: A Sociolinguistic Perspective what my girl is doing as language socialization, meaning that the child learns when it’s appropriate to mix languages and when it’s not. Lanza also explains that “for the child growing up bilingually, learning when and where not to code-switch is an important aspect of language socialization.”

One of the reasons our blog is called SpanglishBaby (aside from the fact it just sounds fun!) is that we recognized early on that all our bilingual (Spanish/English) kids would eventually go through this phrase and we want to embrace it for what it is. If you’re going through this now, or will get there eventually, just know that the most important thing is to not make a big deal about it in front of your child. You can always check out these 5 Ways To Respond When Your Child Mixes Languages and heed our expert’s advice when asked What to Do If My Child Mixes Languages.

Share: Is your child mixing languages or has she/he? Tell us about it!

How to Give Your Children an ‘Authentic’ Immersion Experience

How interesante, isn’t it, to watch such a little Bebe analyze her language skills! I remember reading (quite a few years back and now I don’t remember from where) that code-switching is considered to be a sign of intelligence! Que chevere!

I was very concerned about my son mixing languages when he was little, now that he is 9, I see how he understands which language to talk depending on the person who he is talking to, the important part is to stay strong answering to them in Spanish *at-all-times* event though they know you speak English because they WILL answer in English and you may thing they are not understanding ( I know many parents who had given up on speaking Spanish to their kids because of this misunderstanding) I agree with Ana, don’t worry, is OK to Spanglish!

I am SOOOO grateful for the support from Spanglishbaby. Just like this: “What she does is considered one of the first phases of code-switching and experts agree it takes a well-nurtured bilingual brain to be able to master it. It’s not laziness or lack of knowledge of the languages, it’s just a natural phase”. I can’t tell you how much it means to hear you saying things like this. It takes confidence in what you are doing to work through this phase. It can get frustrating. My son will be 4 this month and does things like using the other language on purpose when I am trying to get him to talk with someone he doesn’t want to talk to. So exactly when I’m trying to have him not be rude, and say something with my coworker or a nice neighbor lady who is trying to talk to him, he has been refusing to say anything to me in Spanish all day, but when the English-speaking adult wants to talk to him that is exactly the moment when he goes into Spanish…

I never gave much thought to the bilingual vs monolingual childhood until I was in college. My baby brother was 4 and we were preparing him for school the next year by teaching him to speak only in English, instead of the English/Spanish combo he’d grown up with. One of my college friends was home with me, studying, and asked me what it was like to be bilingual. And the question baffled me. I couldn’t explain that because my world has always included two languages. Some people spoke one or another, many people spoke both.

Raising bilingual children is difficult. Thanks for sharing your experiences.

Thanks for sharing your story. You’re one of the lucky ones who didn’t even need to make a conscious effort to learn two languages. That’s why the sooner we start with our kids, the better!