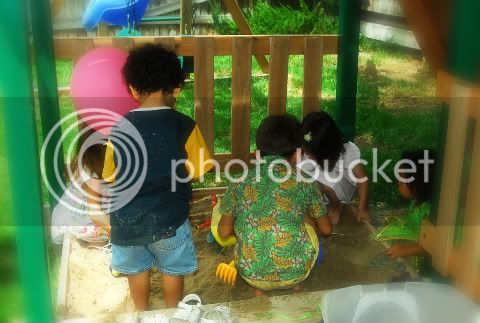 I almost died the other day when, by chance, I listened closely to the lyrics of one of the songs my daughter likes to play on a regular basis – meaning every day a few times a day. I don’t know why I hadn’t paid attention before, but I had to actually play back the song a couple of times to make sure I hadn’t gone crazy when I heard the word “demonio” or devil. The song in question is “El patio de mi casa” and I really don’t remember it from when I was a child, but maybe I just don’t have as good a memory as I thought. Why in the world would a children’s song include this horrendous word? We don’t really use this word – or any of its many synonyms – in English or Spanish at home, so imagine my dismay when I heard it in one of my daughter’s favorite songs?

The thing is that, as with most children’s songs, the lyrics are very catchy, and Vanessa is at a stage in her life where she’s repeating everything she hears, especially when it comes to songs. Anyhow, since “El patio de mi casa” is the first song in one of her favorite CDs, she listens to it more than the rest of the songs on it. And, now I’m not really sure I want her to continue listening to it. I can’t even imagine that word coming out of her beautiful mouth…

What I don’t understand is why the song would have this word. The journalist in me tried to do some research, but I couldn’t find much. The one thing I did discover is that many of the versions available out there, including Mamalisa´s World, don’t include the last verse of the song where the word in question is sang. Coincidencia?

I guess in the end it’s no big deal, since no harm was done, but I don’t think I’ll play that song for her ever again.

What do you think? Am I crazy to feel this way? Do you know the origin of this song? What kind of canciones de niños do you play for your kids?

Sometimes showing is better than telling…

Well, I play a lot of music for my kids–in Spanish, English, Portuguese, French, etc. I don’t play songs that have something offensive in them. Of course, what’s offensive is very subjective. In our casa, “demonio” was/is used as a term of endearment when a child is being not exactly naughty but doing things they’re not supposed to. I also call them “diablitos” when they’re being rambunctious. I also call them “changos” (“monos” for some people)and I’ve had people say to me, “Porque les dice asi? Ay, pobresitos nenes lindos.” Whatever. Anyway, my point is that if it’s offensive to you, then don’t use it, don’t play it. It’s your perrogative.

Ana Gloria, I totally get what you say about some people not always “getting” it. I call my daughter ¨mi monstrito¨, in a very endearing way, but I still get some weird looks! The problem is also that some Spanish language affectionate terms don´t translate well. Just try calling someone “Gordita” in English?!

Dear Roxy,
The truth is that “demonio” is not such a bad word in Spanish, and Spanish-speaking moms in countries such as Mexico may use it quite off-handedly without it having terrible implications for the religious education of their children. You may remember your own mamama Celia going “¡Muchacha del demonio!” on occasion. Ask her.
Cousin Sergio

Roxana
I totally understand. This is the beginning of an exciting journey with parenting a bilingual child. Explaining to your child what the word means, especially to you (including how it makes you feel) is important. My 13 month old has a shirt, which fits his personality at times, that says “Little Diablo”.