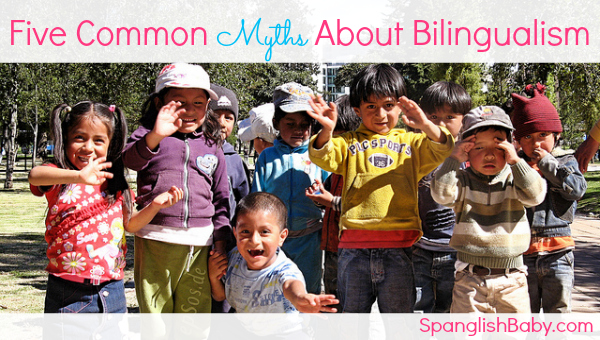 In most parts of the world, being bilingual is seen as an advantage. Back in Peru, my maternal grandfather sent my mother and her sisters to a bilingual (English/Spanish) school from kindergarten on. My parents sent both my sister and I to that same bilingual school. I hope to do the same for my daughter – send her to a bilingual school, that is. And, it seems like we’re not alone. According to some estimates, 75% of the world’s population speaks more than one language.

The most natural way to grow up

But for “many people, especially in countries like the U.S. with a monolingual mainstream culture…being monolingual is the most natural way to grow up,” according to Barbara Zurer Pearson, author of Raising a Bilingual Child. This might be the reason why, in this country, there are so many misconceptions about growing up multilingual.

So, in an effort to promote bilingualism, I thought I’d try to dispel some of these myths for you. Let’s see how many you’ve heard…

To find out more about the actual methods to raise your kids to become bilingual, don’t miss our next post!

And, if you still have your doubts about all these myths, just ask somebody from Belgium, Canada or Switzerland – among others – where bilingualism is the norm, not the exception!

What myths have you encountered during your bilingual journey?

Great post! Keep educating people on the benefits of bilingualism. I really like your site & I’ve added you to my blogroll

Thanks for your kind comment and for the add, Diane!! I am in the process of figuring out how I’m going to start teaching my daughter French – my third language – so I’m sure I’ll be visiting your blog a lot in the months to come!

I think HISPANIC people that don’t teach their kids Spanish think that they’re raising them to be PUREBREED AMERICANS without realizing that they’ll never be that and they’re taking away part of their identity!! Whether their last names are Rodriguez, Alvarez, Gonzalez or Sanchez and they ONLY speak PERFECT ENGLISH….they’re HISPANIC and will always be seen as such!! Stop the facade and just give your child EVERY SINGLE OPPORTUNITY out there!! During these economic times we should LEARN that we must give our children every tool that’s out there to help and guide them to a better future than what we’re seeing now….and learning a second or even third language is only going to ENRICH them!!!

I completeley agree with Gloria R. Mastering a second or third language only adds excellent opportunities to develop yourself in an every day more competitive world.

I am so thrilled to have found your site this morning and can’t wait to read this book you mention. I had purchased “The Bilingual Edge” by Drs. Alison Mackey and Kendall King, and it appears they write with very similar reporting as Barbara Zurer Pearson.

Thanks for opening the eyes, minds and hearts of others!