“Vamos Buster” An Adventure in Chile 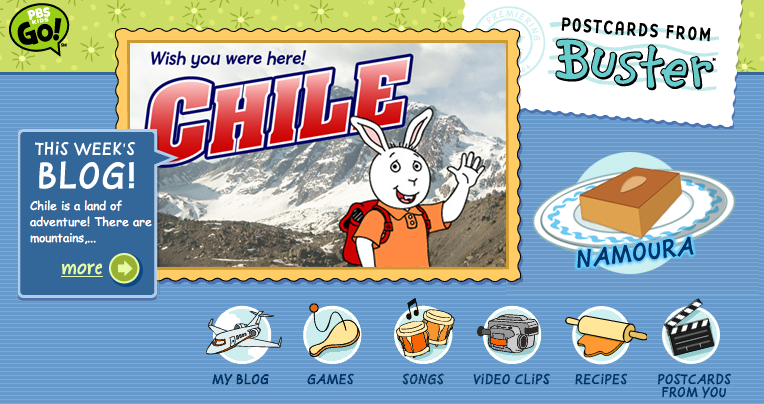 ¡Sí! I am a very proud Chilena. Since I was a child I have moved back and forth a few times from Chile to the US. After I was 11 we stayed in the US but I was very fortunate to have traveled to Chile every two years without fail. I have worked there, have very close relationships with friends and family, was married there, honeymooned there and after my son was born I waited to have him baptized there in front of my very large family. I am a strong supporter of bilingual upbringings and I am raising my son Matías with both English and Spanish.

So you can imagine my excitement when I found out that in a new episode of the PBS KIDS GO! Arthur spin-off series Postcards from Buster called “Vamos Buster”, the reluctant adventurist rabbit from Arthur would be off exploring…mi Chile! Buster himself is thrilled, but when Muffy connects him to her friend Carolina, who wrote a book about saving dolphins from an oil spill in the Amazon, Buster is nervous that he’s not daring enough to keep up with the locals. His nervousness increases throughout his own adventures, which include a horseback excursion to “cascadas,” fossil hunting in the Andes Mountains, and a kayaking trip to see penguins. But when Carolina takes him to her favorite place of all, the poet Pablo Neruda’s house, Buster realizes that the best adventure has been exploring what makes Chile unique and writes his own ode to Chile.

My sister, her boyfriend who is also Chilean, my son and I all sat down to watch it together. A silence came over us as we focused on the very familiar scenes of the snow covered Andes where we have skied on so many times.

Nestled between the Pacific Ocean and the Andes Mountains, Buster meets Carolina his tour guide and friend in Santiago. She takes him up el Cerro San Cristóbal in Santiago the capital city on the funicular or cable car. There they can see a view of the entire city. Good thing it was a clear and sunny day; sadly Santiago has a smog problem which prevents seeing its lovely views.

Buster was then taken to el campo or the country side to see a Chilean rodeo and got to ride a horse with the cowboys called huasos. My sister glanced over at me and said “This is episode is so good. They really capture the true essence of Chile.”  Matías was sitting on my lap and I said “Mira, eso es Chile! Ahí vamos a ir este año. Ahí es donde nació la mami”.  He just looked back at me and said “CHILE!”

The show really focused on the landscape and the uniqueness of Chile. It is a country where in one day you could be in the dessert, then go skiing, then hike up a volcano, go to the beach and dig for fossils. Watching Buster on his adventures made me remember the beauty of my country and I can’t wait to take my son this July, and of course enjoy the wine and empanadas! Next time Buster visits; he needs to let us know so that I can take him to my hometown of Viña del Mar and Valparaíso.

I’m pretty sure Chile makes Buster’s top 5 places to visit in the world. As for me, mi Chilito is my number one place in the world.

Just check out this clip from the show so you can see how perfect this is for our bilingual/bicultural niños to learn more about Chile:

Oh, but the fun doesn’t end there! You too can join in and continue to celebrate this episode. You and your kids can learn to make Chilean empanadas (SpanglishBaby food contributor, Ericka Sánchez, will actually be testing out Buster´s Chilean empanadas recipes and sharing with us here tomorrow!), read a new blog post from Buster about his trip, and test your knowledge of Chile in Buster’s International Game Show, all available online  at pbskidsgo.org/buster.

And don’t forget to check out the activity pack both parents and teachers can download that contains more information and activities that allows the kids to continue learning even after the episode has aired. You can find these and more at: pbs.org/parents/buster/.

Disclosure: We received compensation for this post, but would have shared this information with you anyway.

I can only imagine how excited you and your family must have been watching this! Cómo se añoran nuestros países.
Love that you have Buster to help you show your son about your Chile

I think everything said was actually very logical. However, think about this, suppose
you were to create a awesome post title? I mean, I don’t wish to tell you how to run your blog, but suppose you added a
post title to maybe get people’s attention? I mean “Vamos Buster” An Adventure in Chile |SpanglishBaby™ is a little
vanilla. You could peek at Yahoo’s home page and note how they create news headlines to grab viewers to click.
You might try adding a video or a related pic or two to grab people excited about everything’ve got to say.
Just my opinion, it would make your website a little livelier.