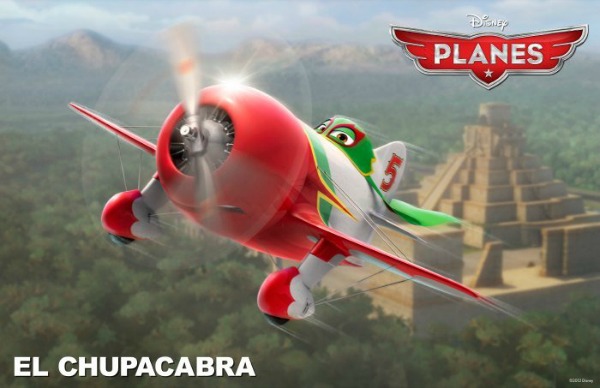 Disney’s “Planes” is out in theaters, and if you got caught my movie review, you’ll know one of my favorite characters is definitely El Chupacabra. Carlos Alazraqui is the voice that brings El Chu to life, and with a personality that rivals his character, interviewing him was as easy as pulling up to Taco Tuesday with a best friend. He makes you laugh, he makes you cry, but be warned – when he is mad, he is likely to “swish my cape at you!”

You may not recognize his name or face, but his voice is one you’ll recognize. As the voice for characters such as Rocko on Rocko’s Modern Life, Felipe from Handy Manny, King Magnus from Sophia the First, Deputy James Garcia from Reno 911 and Walden from Wow Wow Wubzy, you are sure to have heard his impressive talents on screen. Carlos spoke to us about his favorite qualities of his “Planes” character, “El Chu has valor and passion and is el luchador! He has vulnerability; everything you want in character.”

But truly, it was this Hollywood actor’s candid remarks about playing a Latino character in a Disney filmed that sparked a great conversation on bi-cultural life. “I don’t recall a prominent Latino character has been in one [Disney film], so it’s kind of a privilege. Also, because, he’s a good guy. He’s not a villain”.

As the child of Argentinian parents, Carlos grew up as a typical Southern California kid. Now, as a father himself, Carlos spoke openly about the difficulties raising his two year old daughter to be “more bilingual than me”. And while Carlos says he is not totally bilingual, I thoroughly enjoyed our Spanglish conversation.

Having the chance to meet Carlos Alazraqui and learn a bit about how the voice of El Chu developed was such a treat. If you have seen Planes already, did you enjoy the character as played by Carlos Alazraqui?

El Chu was great in Planes. He’s akin to Mater from Cars, in that he was not the main character but when he was in screen, he was a major focus.

I do want to say that there have been a couple of other Latino characters in Disney animated films as protagonists, though. Jose Carioca is a Brazilian parrot, and debuted in Saludos Amigos as Donald Duck’s friend from South America. Donald and Jose returned in The Three Caballeros where they were joined by Panchito, a rooster from Mexico. There was going to be a third “Good Neighbor” film which would have introduced a Cuban character, but the film never got made.

Jose was a comic book star in Brazil for many years, just like Donald was in the States. All three of the Cabelleros are now featured at the Mexico pavilions at Epcot, as well!

Hopefully there will be more El Chu in the sequel!

I’ve been looking for Boys Star Movie Join via Paypal