Disney’s “Planes” is now in theaters nationwide! I was fortunate to learn some behind the scenes information representing SpanglishBaby at the DisneyToon Studios, even interviewing  Teri Hatcher (voice of Dottie) and the film’s Director and Producer too. It was an awesome experience, especially since this Disney film is extremely special.

Main character, Dusty, is but a simple crop duster from the farm town of Propwash Junction, USA. Together with the support of his best friend Chug and over-protective mechanic Dottie, Dusty dreams of “being something more than what I was built for” and works diligently everyday to achieve those goals. I loved all the scenes of Dusty practicing – flying the same track of corn fields and water tower everyday without complaint – messaging many parents will appreciate. In a world where hard work can sometimes go unnoticed, we watched as Dusty’s dreams became a passion and, ultimately, a huge success as he conquers his ultimate fear – his fear of heights! 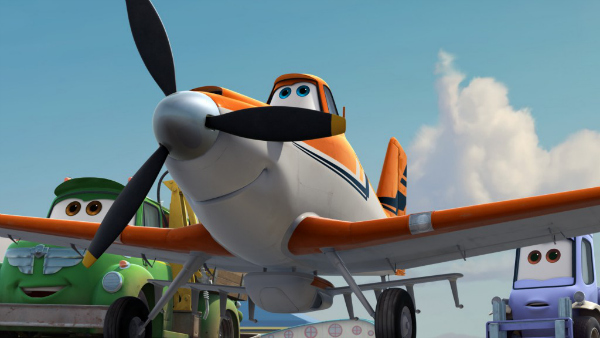 I can hardly get around writing about the joy of hearing a Spanish accent and depiction of a Mexican plane in this new Disney film. Voiced by the amazing Carlos Alazraqui, movie watchers are introduced to the indoor racing champion of the world, El Chupacabra. I can’t deny feeling akin to El Chu’s warm and loyal qualities. He becomes a good friend to Dusty, while bringing humor to the film with his grand declarations – “… I swish my cape at you!”.

In addition to Dusty and El Chu, “Planes” lights up the sky with planes from all over world, giving this Disney movie a distinct multi-cultural perspective. Ishani is from India, Bulldog is from Great Britain, and Rochelle, who is “localized” in 8 different countries, is a French Canadian. As the characters fly through new terrain of countries not often depicted to our children. In fact, the scene when Dusty and Ishani go flying by the Taj Mahal is one the favorites of Director, Klay Harris as the sheer beauty of the imagery is undeniable. The race around the world truly brings in new imagery, voices and cultures from the high vantage points of planes. And the moment when Dusty’s friends from around the world come together to his aid is truly one of camaraderie and partnership. The scene of Dusty’s near demise turned out pour of support is a true Disney moment filled with hope and optimism; one that makes us hope that maybe our world is a better place than given credit for.

Sweeten the deal and enjoy a smoothie while soaring through “Planes”. We are giving away a $50 Jamba Juice gift card for you to enjoy with your niños before watching Planes! All you have to do is leave us a comment telling is what you are looking forward to the most in Disney’s new Planes movie and enter the rafflecopter below.

#BilingualKids Video of the Week: Basho and Friends Alfabeto Song

I am looking forward to taking my three year old to the movie theatre and seeing his face light up. He loves airplanes and this will be his first movie in a theatre!

Thank you for the giveaway

I am looking forward to the cool characters.

I am looking forward to see my favorite characters

My kids are looking forward to seeing this movie. We love how colorful this movie is and the story.

i’m an aviatoin buff so just seeing the animated depiction is what im’ excited for!

My son is obsessed with airplanes, so I am looking forward to enjoying this movie with him. He will light up!

Entered the rafflecopter as “Wild orchid”

Thanks for the chance to win!
wildorchid985 at gmail dot com

I’m looking forward to seeing the incredible animation of the movie!

I am looking forward to funny adult humor

Different types of planes from all over the world!

Looking forward to enjoying planes with my plane-loving toddler

seeing the cute characters as planes

I loved cars so I look forward to seeing how the planes are “humanized.”

I subscribed to your blog via email: basketgal917@hotmail.com

I am already a subscriber as rounder9834 @yahoo.com

I most look forward to it because it looks like it has positive themes. I have heard some really good reviews. I think the kids will love it. I just love it when we go out as a family and just forget about the world. And watching a cartoon makes you feel like a kid again. Thanks so much for this opportunity to win.