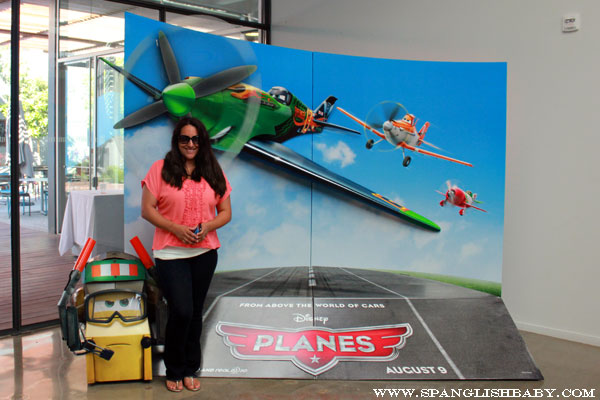 Disney’s new animated film “PLANES” is landing into theaters on August 9th, but SpanglishBaby readers get a first look at a behind the scenes making of the world above “Cars.” Disney invited us into their DisneyToon Studios for a full day of learning and to experience how our favorite films are made. We also got to preview the movie, which will surely be a family favorite! It was definitely one of mine. Not to worry, complete review will be coming soon!

If you’ve ever had a chance to visit the DisneyToon Studios, you were likely as in awe as I was. Right now, the entire lobby is decorated to resemble a landing strip, with Dusty and his friends hanging out at the hanger. The walls are lined with artwork created by Disney artists from many years past. It was like a walk down memory lane! 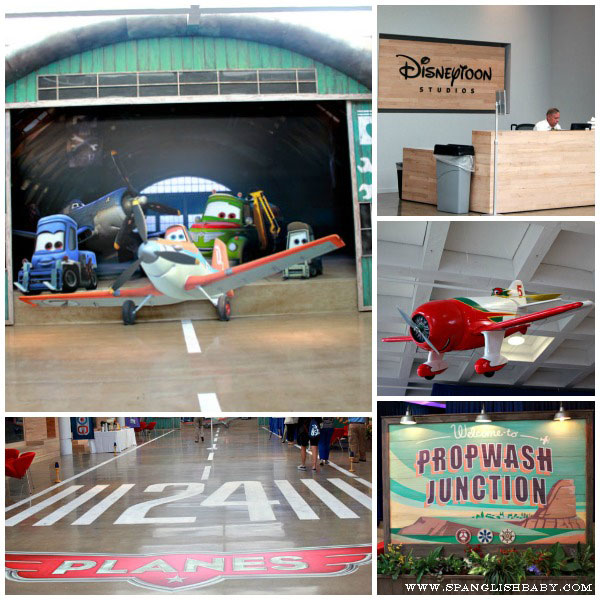 After escorting us into a private movie theater to premiere the final cut of “Planes,” we were invited to learn how Disney Storyboard Artists bring the script of “Planes” to life through sketch drawings, that are eventually made into animation, but we’ll get to that later. Art Hernandez is one of the lucky guys that helps mold a Disney movies – from script to movie screen. Art explained to us how the storyboard process for Disney animated movies takes anywhere between 1 to 2 years and 40-50,000 story panels because they are essentially creating a template for all the departments to follow. The Story Artists are also responsible for pitching the sketches and “selling the scene” to directorsm, making their jobs instrumental in developing the characters we have all come to love.

While meeting with Art, I got the sense that he really loved his job and, after I asked him if he was like a kid in a candy store, he opened up to us a little bit about how he achieved all this success. Born and raised in Los Angeles, Art always knew he wanted to be an artist. He loved to draw and was grateful for the influences in his life that pushed him to succeed. When asked what his number one tip that moms can do to help their child’s passion for drawing and art? “Provide lots of encouragement, opportunity for practice and many different kinds of materials. You never know what art form you’ll love best until you try!”

After story boards have been walked through, voice overs have been recorded, it was time to begin animating the film. Ethan Hurd is the Assistant Animation Director, having worked on Disney movies since “Toy Story 2,” he was very kind and patient with all my questions. I must have asked him a dozen times how a character was created from rough drawing to the animated version we were looking at, but I still don’t understand! The amount of technical precision and art within the DisneyToon studios is mind boogling. Ethan uses a program called Autodesk MAYA 3D to fill out the movie’s animation. He explained to us how he first will go through a scene and create broad strokes of animation after which he would then concern himself with the subtle animation. As he explained, the subtle animation is crucial to emote feeling and to help viewers connect with a character. In “Planes,” he noted that this was especially difficult because, without arms or hands, Ethan only has the eyes/eyebrows of the planes to create a sentiment.

I can’t wait to share more about this fascinating experience at DisneyToon Studios and the upcoming PLANES film. As always, it was an honor to represent SpanglishBaby!

You can follow PLANES on Facebook or check them out on Twitter to recieve up to date information on the film, which will land into theatres on August 9th.

Unique Books in Spanish for Kids Giveaway from LA Libreria

Wow!! What a great point on expressions. It makes sense that it would be much more difficult to express sentiment without arms and hands. I wouldn’t have thought about that.

My son will be thrilled! Looking forward to this!

I found some great info in your site and bookmarked to visit again . Thanks.

Hmm i hope you dont get annoyed with this question, but how much does a site like yours earn?