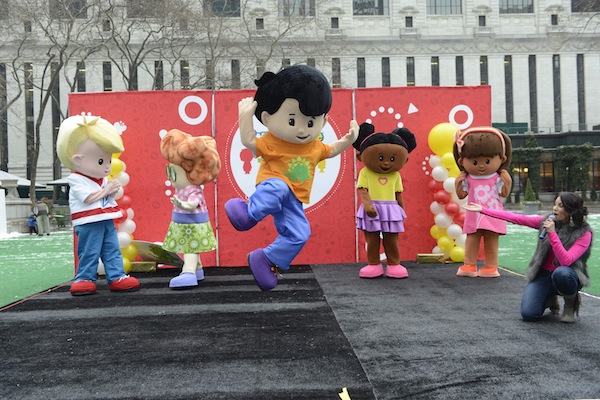 It’s hard to walk into a house with a preschooler that doesn’t have one of Fisher-Price’s Little People characters in the play area. This is a classic and iconic toy that has inspired generation of pequeños to engage in the early stages of creative play in any language. No wonder over two billion Little People figures have been sold in 60 countries since the brand’s launch 54 years ago. From the days when I played with them back in the 1970′s, to when my daughter got her first Little People play set, the figures have changed and evolved with the times and they continue to do so.

Earlier this week Fisher-Price announced during an event in Manhattan’s Bryant Park, which included a special musical performance by singer/songwriter and children’s TV star, Genevieve Goings, that it has made an unprecedented investment to refresh its iconic, beloved Little People brand and transform it from a toy brand to a lifestyle brand. The company executed a complete toy design refresh, complemented by an award-winning writing, illustration and musical team to contemporize the Little People brand for today’s new generation of preschoolers, while preserving the charm that has contributed to the ongoing success of the brand’s 54-year heritage.

The webisodes will feature a multicultural, ensemble cast of Eddie, Sofie, Koby, Mia®and Tessa, each with unique traits and interests that make them special – just like the children they exemplify.

We can’t wait to meet the new Little People cast and create new memories for a new generation of kids. The Little People LIVE Show will be touring in its fifth consecutive year in 2013, traveling to top zoos across the country, as well as performing onboard Royal Caribbean Cruise Lines, to entertain children and encourage them to dance and express themselves with their Little People friends.

Make your melodies sound more creative by using the concepts in this songwriter techniques improvement guide (it’s free). Akon experienced identified Lady Ga – Ga and he quickly signed her to his file label just after he listened to her for that very first time. But after figuring out the games in LA, I had this ‘a-ha’ moment when I didn’t feel like I was doing what I was supposed to be doing.

ver the years, Travel – Pro has created new collections, and added
new innovations to their rugged, attractive, bags.
Because of my status on the airlines I fly regularly I fly
first class more often than not at no additional cost.
Function, style, and durability; these are
the most common criteria we normally use in order to purchase clothing and luggage we take with us on a trip.
กระเป๋าเดินทางวินเทจ´s last post ..กระเป๋าเดินทางวินเทจ

I just like the helpful information you supply
on your articles. I will bookmark your weblog and
take a look at again right here regularly. I’m somewhat certain I will learn lots of new stuff right right here!

Best of luck for the following!
Mitchel´s last post ..Mitchel

Learn and play both is very important for all kids. To enhance kid’s knowledge and mind activities, we must choose educational learning toys from the leading company. I will like animal pocket chart play for my kids because it’s really interesting game, where kids love to arrange this pocket chart according to animal.

Great blog you have here but I was curious about if you knew
of any forums that cover the same topics discussed here? I’d really like
to be a part of group where I can get feedback from other
experienced people that share the same interest. If you have any suggestions,
please let me know. Kudos!
Konsaltvm.Ru´s last post ..Konsaltvm.Ru