Are You Raising Truly Bilingual Kids? 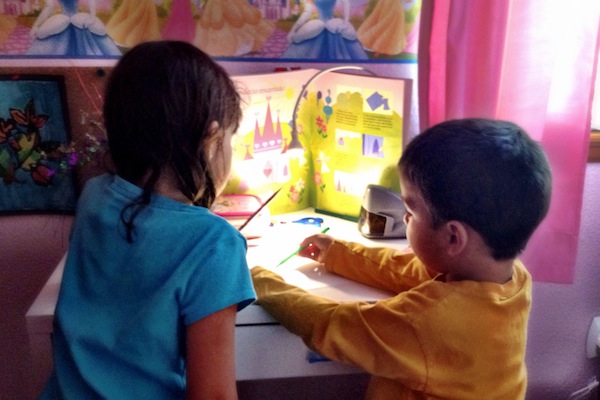 Last week, I shared a link to an EFE story I was interviewed for regarding the current state of the Spanish language in the United States. One of the other people interviewed is a woman who runs a language school for children here in Denver and one of her quotes caught my attention. She said: “Bilingual people must possess a certain mastery of both their languages… speaking them is not enough. Writing, reading and comprehension are integral parts of learning a language.”

And the debate about what it means to be truly bilingual started all over again in my head. Is this woman right? Does one have to speak, read and write in their second language to be considered truly bilingual? As with other subjective questions, let me begin by establishing that there’s no right or wrong definition. I mean, there’s the definition given by the Merriam-Webster Online Dictionary: “using or able to use two languages especially with equal fluency.” But does “using” mean speaking, writing and reading? A lot of people consider themselves bilingual and they only know how to speak the language, but can’t write or read it properly.

For me, it has always come down to this: As a journalist, could I apply for a job that requires me to do research, interviews and then write a story in English and Spanish? In other words, can I write, read, understand and speak both languages well enough to succeed in the job described above? The answer is yes, not only because I believe I can do it, but because that’s basically what I’ve done since I became a journalist 20 years ago.

As a Latina writer who is very proud of her heritage, nothing would be more disappointing to me than raising children who are only able to speak my mother tongue, but can’t write it or read it. I can’t imagine my daughter — who is well on her way to becoming a bookworm like me— reading Mario Vargas Llosa in English (kudos to those who have, but I’d be lying if I said it is the same) or my son unable to write a Christmas card to his monolingual bisabuela in Spanish.

Because my kids are not lucky enough to go to a dual language immersion school, making sure they’re truly bilingual (based on my definition) is up to me. As I’ve mentioned in the past, Vanessa reads and writes in Spanish not because I sat down to teach her, but because she transferred those skills from English to Spanish. In other words, I got lucky. I don’t know if that’ll be the case with Santiago. Even if it is, I know they would still need formal instruction in Spanish so they can learn all the grammar and spelling rules — and exceptions — of my native language.

What I would like is for my kids to feel as comfortable in Spanish as they do in English regardless of the setting — just like me. My life is definitely richer because of it. Ojalá un día mis hijos puedan decir lo mismo…

Do you think your kids need to read & write in their second language to be truly bilingual?

Baby Names That Work in English and Spanish

What Does it Mean to Be Bilingual?
How do you define being bilingual?
Raising Bilingual Kids: What is the mL@H Method?
14 Comments

I would say so- and even go a step further. I think true, deep bilingualism comes from not only being fluent in both languages (reading, writing, speaking) but also understanding both cultures. It’s in this final part were you really seal the deal: Small nuances are captured, the use of humor and slang, etc. This makes and individual go back and forth effortlessly between two worlds that, for him/her, are one.

You’re right! In an ideal world, bilingual people are also bicultural, but that’s not always the case. For example, my third language is French and despite being able to speak, read and write it, I don’t have enough exposure to all things French to feel as comfortable in that culture as I do in the cultures of the other two languages I speak.

When it comes to Spanish and our Latino culture, however, I’m doing everything in my power so that my kids are able to go between their two worlds effortlessly, like you said.

It is much easier if you are talking about bilingualism in 2 languages that share the same writing system such as English and Spanish. It is a lot different if the languages are completely different such as Japanese and English. A child would have no trouble learning to speak Japanese, but with over 2000 characters to learn, it would be more difficult to learn how to read and write the language. A friend of mine has trilingual children–Japanese, Korean and English. Three different writing systems!

I can only imagine, Susan! It’s obviously much easier to become biliterate in languages with the same writing system! I’ve just always liked how people define bilingualism compared to how I define it. As I mentioned, I wouldn’t be able to get hired as a bilingual journalist, if I wasn’t able to read and write in both English and Spanish.

Is your husband teaching your sons to read and write in German?

He is working on German with them, mostly reading. I am going all the way using all of the Coquito books I purchased in Peru. I was able to teach my older son to read in Spanish before kindergarten so I know that he will learn to read in English easily. I am working with the younger one too. Love using Coquito!

Hola Roxana. Gracias por tu artículo. I’m trying to raise my kids trilingual even though I still don’t consider myself 100%bilingual. Until now I had thought speaking and understanding the second or third language would be enough for them to be considered bi/trilingual, but I have to say I definitely agree with you and to be truly bi/trilingual you need the whole package. As for when you have to learn all of them is maybe another story because everyone is different. Probably the sooner the better. At the moment I’m still raising “analfalingues” niños but I’m sure one day we’ll get there.

What three languages are your children learning? I really wanted to teach my kids French, which is my third language, but it has been a little bit harder than I initially thought… My 4-year-old son, though, seems to be very interested in learning ever since I started reading some French books to him at night and so I’m thinking I need to get back to at least exposing them to a third language.

Thanks for stopping by and good luck in your trilingual journey with your kids!

Hi Roxana!
We use that technique ‘OPOL’, so I speak to them in Spanish, hubby in Hungarian and in school they learn English; this year my 7yr old has started learning French at school. My nearly 4yr old speaks Spanish, a bit of Hungarian and has started to say more words in English now that he’s at nursery. My 1yr old is just sarting to get the idea of everything, bless her. We tend to do everything about languages as natural and normal as possible (and OPOL helps a lot in that!) so that they get the idea that that’s how life is: ‘in different languages’. The thing with languages is that you have to be persistent and keep practicing it, isn’t it? so I appreciate it is harder if one parent is teaching two languages at the same time like in your case, specially if the time factor is an issue but as they say over here ‘every little helps’

I wonder the exact same thing. I had someone actually asked me:

“Do you think your kids need to read & write in their second language to be truly bilingual?” (your questions from above).

I just did not know what to say or think. BUT I am LOVING the responses here. I so agree with Anabell.

Bilingual has to do with speaking (lingual-lengua) two (bi) languages. Biliterate is a way to describe the ability to also read and write both languages spoken. California even offers a State Seal of Biliteracy on the diplomas of graduating high school students who have proven academic proficiency in all modalities of English and another language (as evidenced in passing an AP language exam, GPA over the course of language study, international languages test, etc). As a high school AP Spanish Language and Culture teacher, part of my recruiting process is attending the meetings our school has with Latino parents to advocate enrolling their students in Spanish courses so that they won’t just be bilingual, but also biliterate, which will put them in a league of their own when it comes to jobs and their future studies. Bilingual is undoubtedly better, but biliterate is even better than that; biliteracy a thick layer of frosting with rosettes and a candle on top the yummy bilingual cake. I think it’s important enough that I’m doing the same to my own daughter. At 4 1/2 she speaks beautiful Spanish and English and I’m hopeful that the reading skills she picks up when she starts school in English next year carry over into Spanish (if her knowledge of the sounds of the letters of both languages is an indication, I think this will occur). When she reaches an age where there are actual Spanish courses she can take, she will have to take them to clean up what I may have missed. She can hate me temporarily for it (since she will likely end up in my classes) and appreciate me later.

I’ve discover quite a few exceptional material the following. Unquestionably benefit social bookmarking with regard to revisiting. I wonder simply how much endeavor you set to produce any such wonderful helpful site.

Hello there, just became aware of your blog through Google, and found
that it’s truly informative. I’m going to watch out for brussels.
I’ll be grateful if you continue this in future. Many people will be benefited from your writing.