Is Spanish an Endangered Language in the United States? 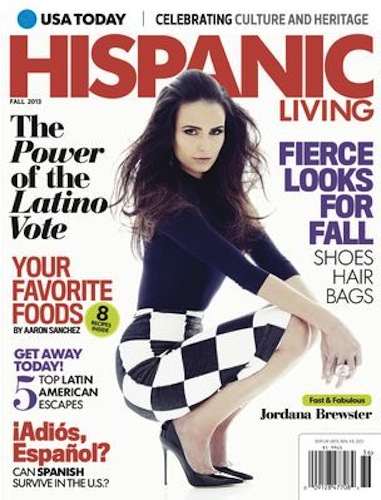 The topics of bilingualism and the state of the Spanish language in the United States have been in the news a lot lately.

A couple of weeks ago, an article I worked on over the summer titled “Can Spanish survive in the U.S.?” was published on USA Today’s Hispanic Living magazine, as you can see in the photo of the cover above. It’s an article I truly enjoyed working on because it was incredibly interesting to delve into the history of Spanish retention in the United States. I had the opportunity to interview several people with completely different stories who helped me understand how difficult it can really be to pass on your heritage language.

One of my favorite interviews was with Oregon State University Professor Susana Rivera-Mills, an expert on Spanish language usage in the U.S., who told me something that has stayed with me ever since our interview this summer: “The home, by far, continues to be the last and strongest enclave for language to be transmitted from one generation to the other. And when the home is eroded, then that transmission becomes weaker and weaker.” Hearing that reminded me how important it is for my husband and I to continue to be committed to making Spanish the only language we speak at home, especially as our kids get older and things get more complicated.

On another note, and although it was to be expected, I was a bit saddened to see so many negative and utterly ignorant comments about bilingualism, how this is America and everybody needs to speak English and how nobody cares if Spanish disappear. When will this people understand that bilingual means two languages and that speaking Spanish (as one of your two languages) doesn’t make you less American?

Besides the USA Today article I wrote, I was also interviewed about the topics of bilingualism and whether the Spanish language will survive in this country by both EFE, the Spanish international news agency, and CNN. Here are the links in case you’d like to check them out:

Unfortunately, all three articles seem to point to the idea that more and more Latinos are speaking less and less Spanish. While this seems hard to believe considering the ever-growing community we’ve created through SpanglishBaby, the notion just makes us feel even more committed to providing the necessary tools, information, resources and support to parents who want to give their kids the gift of bilingualism.

How much truth do you think there is to the notion that Spanish is a language in danger in the United States?

Homework Is In English. Now What?

4 Reasons Why Every Child in the United States Should Speak Spanish
Week in Links for #BilingualKids — Feb. 15
Instead of Banning Spanish, Schools Should Promote the Benefits of Bilingualism
8 Comments

I had read the CNN article and I shared it with my Facebook friends because, for the most part, I agreed with it. Both my parents emigrated to the United States before I was born and spoke Spanish in the home. Spanish was my first language. In fact, I only learned English once I started preschool. But my parents divorced when I was 6 and a lot of my exposure to the Spanish culture went away with that split. My husband is not Spanish or Latino, so that makes it difficult to pass on the culture and language to my kids.

Thanks for sharing with us, Mary. Your story is that of many second and third generation Latinos. Lots of things come in to play when it comes to why the native language is lost. If you read the USA Today article, you’ll see that marrying someone who doesn’t speak Spanish is one of the ways in which this happens.

Just do what you can and even if that won’t help your kids become bilingual, it’ll be nice for them to know about their heritage.

I think there is a lot of truth to this article. I teach high school students, either immigrants themselves, or children of immigrants. It always amazes me how quickly English becomes the dominant language and how students really don’t have many opportunities to continue to develop their Spanish skills. Many parents work two jobs and rarely see their kids, siblings speak to each other in English and Spanish seems to be used mainly for shouting out “groserías” to each other so English speaking teachers won’t understand.

At conferences though all of my discussion with parents is in Spanish, its rare that the kids will add to the discourse in Spanish. Though the parents speak in Spanish, many kids respond in English. These students are “bilingual” but English is what they feel most comfortable speaking. When they have their own children I can’t imagine that most if them would choose to speak primarily Spanish at home because it would be much harder than English for them. I have no doubt they will use some Spanish with their kids, but it wouldn’t be enough to create a truely fluent child. This saddens me and I wish there were more opportunities for students to continue to utilize their Spanish as they learn English. Our dustrict just started a dual immersion program. Hopefully it’s a step in the right direction.

Successive generations eventually become English dominant. That’s normal and it happens to every ethnic group. There is nothing wrong with knowing a second language, but why should future generations born and raised in America be expected to use Spanish as their primary language? I don’t get it.

Susan, you’re right, it’s totally normal that as the generations go by, the heritage language is lost. But what makes Spanish different is that there continues to be an influx of immigrants from Latin America. So hopefully, it’ll stick around for a while.

In terms of Spanish being a bilingual child’s primary language, as Beth mentioned above, it’s practically impossible for that to happen in the United States. My children’s first language was Spanish and they didn’t learn English until they entered school. Now, they’re both bilingual. As they get older, I’ll have to do everything in my power for them not to forget their Spanish because, as long as we live in this country, English will always be their dominant language.

The issue discussed here is how to keep Spanish alive, but that doesn’t mean we don’t want our children to speak English. That would defeat our purpose of raising them bilingual.

I really appreciate your comment, Beth. It goes to show how it’s virtually impossible for English not to become children’s dominant language if they live in this country, despite the other language spoken at home. It saddens me too, but in the case of your students, I could see why they’d want to speak English to ensure they fit in. And if they don’t really have opportunities to continue to develop or use their Spanish on a regular basis, then it’s easy to see why they start losing it.

Some schools offer Spanish for heritage speakers in their junior and high school curricula. This can help students develop their language skills in their home language because it is a process. It’s important that this be done with care though, since many adolescents feel insecure (about a lot of things!) and can feel discouraged about language learning. When done well it can be very empowering for students to improve their skills and feel more connected to their language and culture.

My step dad came here from Mexico in the 1940s. He din’t mind people speaking Spanish but after he fought in the Korean war, he never spoke Spanish again. He said “we are one country, one people and one language”. He hated the idea of separate radio stations, newspapers and TV.

He felt like it was underhanded way of creating a separate country within the US and deeply disrespectful to America. He died 5 years ago with full military honors as a true American.