Getting my Husband to Speak More Spanish to Our Kids 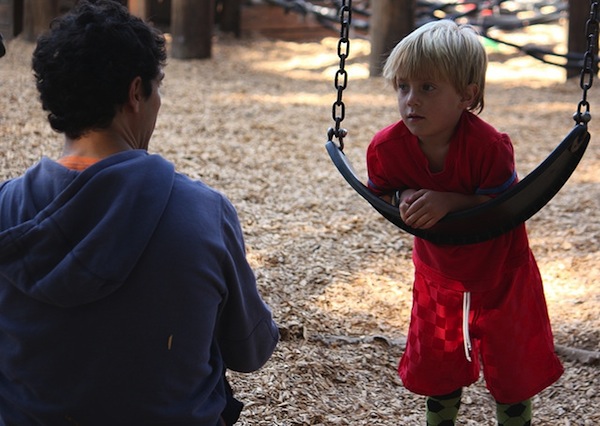 I rarely make resolutions for the New Year. I tend to make them year round as I see fit, that way there is a better chance I will actually achieve them. And as far as New Year’s Eve, I was lucky to be awake anywhere near midnight as I’m so tired and just ready to have my second baby (due very, very soon!) But recently the SpanglishBaby team asked us what our resolutions were as they pertained to our kid’s bilingualism and it really got me pondering my goals.

Last week, as I was driving my son to his preschool he suddenly asked “Mami, la guaguita (baby in Chilean Spanish) habla español?” (Does the baby speak Spanish?)

Me: “Sí, ella va a hablar español como tú”. (Yes, she will speak Spanish like you.)

My son: “¡Ay, qué bueno! Porque yo le quiero enseñar inglés también y ¡todos podemos hablar juntos!” (Good! Because I want to teach her English too and then we can all talk together!)

I have always known I was going to speak Spanish to my children, however I had never thought about it from the point of view of my four year old son and his need to have “language comfort” once it is no longer just the three of us. I could feel his concern about including his new sister in our language setup and I could hear the relief in his voice when I told him that he will in fact be able to communicate with her as I do with him.

My resolution for this year is to continue to nurture the Spanish language in our home and watch another little person grow into a smart, capable bilingual individual. However, part of that language nurturing includes (and here’s where the real challenge comes in) FINALLY getting my husband to loosen up and speak more Spanish! He understands and speaks it very well, but he just won’t put his language skills to practice.

I suppose it is part of his personality, the perfectionist in him that wants to wake up one morning and speak it flawlessly. However, I feel now is the right time — we’ve been married eight years and I want to make a stress-free immersion environment with our kids to get him to a comfortable speaking level with us.

He has admitted that by hearing me speak to our son, he has improved his own vocabulary and has better use of his tenses. I hope with two children now, we can all encourage papi to join us and truly make this a bilingual home, even if in small increments.

Have you integrated your non-bilingual spouse/partner in speaking your language? Or does keeping two (or more) languages separate work for you?

A Peek Into Our Lunch Box

Loved your article. I used to get weird looks from people when they’d ask me if my daughter was bilingual and my response would be, “No.” They didn’t let me finish saying, “Not yet.” You see, Spanish is my first language and my wife is white. The only times that my daughter would get any type of Spanish lessons was when she was around my Spanish speaking mother. I guess I did it so that she would grow up and get a hunger and love for the language. When she was about nine, I took her for the first time to my home country of Mexico. We spent about two weeks. You would have thought we were there a couple of years. My daughter had no choice but to learn the language “fast” because nobody else spoke English. She fell in love with the language and the country. She is now thirteen years old and almost fluent. She understands it and speaks it very well. We had another child three years ago and I plan on doing the same thing with him.

That is fantastic! And great to know your daughter is eager to learn more – it’s sad when kids shy away from another language, but like you said it is about the encouragement. They more the feel a natural incline to it, they more they will want to practice and feel confident to continue. Best of luck with your son – as long as he hears it around him it won’t be a complete shock later.

Enjoyed reading your article, I strugge with creating a bilingual environment at home. My husband is African American and does not speak very much Spanish. I have a 9 yr old and a 3 yr old (soon turning 4) and the four year old has adapted more to the Spanish language–I find it a struggle because I am the only bilingual person at home and at work…I’m working on it:)

My husband speaks Spanish but feels a bit self-conscious around our bilingual big kids (20/21) and so only uses it a wee bit. We will soon be living back in NZ leaving the big kids in Bolivia for university studies and so I hope he will feel better about speaking Spanish with the littlies (5,5) as it is their sibling language and with Spanish church we hope to keep it up even though they will be thrown for the first time into an English dominant environment. We have always spoken both languages to them since they were babies but now we need to try and stick to Spanish only and let the English come naturally (I couldn’t say which is their heart language).

I’m trying to get my husband to speak more Spanish with our son too. ( He was raised by his Guatemalan Mother and Grandmother who spoke only Spanish in the home until he was 6.) I learned Spanish in college and am very much like your husband. I want it to be perfect. I’m afraid of messing up. I think that’s why conversation is the hardest for me. Then one day it dawned on me that I have to speak Spanish for my son. I’m his primary caregiver (my husband is in the military and gone a lot) and he’s not going to learn it unless he hears it. So, I stepped up and now speak mostly Spanish to him. I may have to look things up every once in a while, but that just means I’m learning too!

i am Mrs cherry Johnson from the usa,i was facing a tough time in life as in getting a man to called my husband.
so on one faithful day a friend of mine called and gave me a email address and she ask me to contact him immediately
and i did contacted DR FRANK and he assured me that in three days time am going to be engaged at first i never
believed but to greatest surprised on the third day i came across my husband today Johnson.so whatever you think
your problem his today just contact the email address below.
BLACKSPIRITSTEMPE@GMAIL.COM
TELL:+2348078366264

Adhere to their suggestions for use of fuel stabilizer when
purchasing new fuel and for general use of the item. Carbon monoxide poisoning is no enjoyable and can be deadly.

But how to do that if you don’t have any encounter?