When Papi is Responsible for Raising a Bilingual Child 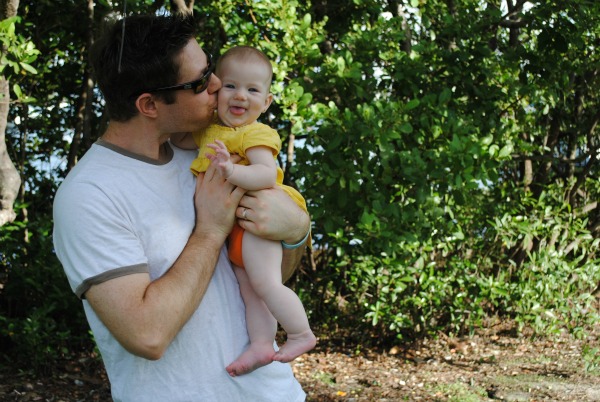 Editor’s note: For a long time now, we’ve been hoping to bring the dad perspective to raising bilingual children. While we were in Miami in September for our Bilingual is Better book launch, we met Ryan Pontier, the author of the guest post below. We were immediately impressed by his commitment to bilingualism — particularly because Spanish is not his native tongue. Ryan, however, hasn’t allowed that to stop him in his journey to raise his baby girl Anna bilingual. ¡Bravo!

I love to take my daughter grocery shopping with me because I find it to be an excellent opportunity to use language. I tell her what aisle we’re on, where we’re headed, and how I plan on using each of the ingredients we are searching for in a future recipe. As I approached the cashier last week, I made sure to carefully place each of the items in my cart on the conveyor belt, briefly discussing each one in an effort to narrate the experience for my 8-month-old daughter Anna. “Éstas son las zanahorias — largas, de color naranja y crujientes. Luego ésta es la espinaca. Es verde, es una hoja y la usamos en la ensalada.” The charade continued this way until I had neatly ordered all of the groceries while simultaneously balancing Anna in the Baby Bjorn. Because I noticed that the two women in line in front of me were engaged in a conversation in Spanish with the cashier — and because I am the Spanish language model with Anna —I greeted her informally in Spanish. She glanced quickly at me and proceeded to respond to me in English. This situation is one that I experience at least twice weekly here in Miami.

I love Miami for its culture and its languages, but I feel that I constantly have to prove to others that I speak Spanish. Although I may not seem it at first glance, I am, in fact, a fluent Spanish speaker. I am a white male who grew up in a rural, monolingual English town, but Spanish became my second language and my passion as soon as I was allowed to take a foreign language in seventh grade. My interest grew until college, when I had the opportunity to study in Madrid, Spain for an entire academic year and live with a host family. After graduating, I moved to the Texas-Mexico border and taught reading and language arts in Spanish at a bilingual elementary school. Two years later, I moved to Miami to be closer to my [now] wife. We have been here together for six years, and we are proud to be raising our daughter here.

My wife and I have decided to use the one-parent/one-language (OPOL) approach to raise our daughter bilingually. This means that I am the Spanish language model. As such, I am responsible for providing her with rich and varied language experiences that invite and allow her to hear and practice using Spanish, my second language. This is a daunting task at times since I am the only Spanish speaker on both sides of my family. Also, because I use English for social and academic purposes, I am admittedly more proficient in English. Luckily, my neighbors are friendly, I have great dictionaries, the internet is a pure blessing, and I know I can simply use an English word or phrase as a placeholder until I learn to say what I need to in Spanish. I am always learning, and it has yet to be too stressful, because I know that I am giving my daughter a gift by raising her bilingually.

So, after glossing over the conventional pleasantries of interacting with the cashier, I enjoy making a comment about the weather, the amount of people in the store, or something about Anna to show that my Spanish abilities go beyond the few stock phrases that most of us learned in Spanish class in middle and high school. This way, I demonstrate the value of Spanish for Anna, provide her another context in which to hear (and eventually use) Spanish, and self-indulgently prove to the world that I am a proud and capable Spanish speaker. 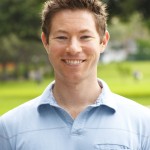 Ryan W. Pontier is the proud papi of a curious and babblingly loquacious 8-month old bilingual daughter. He grew up in Central New Jersey as an English speaker and excitedly learned Spanish as a second language after years of classroom foreign language study and a life-changing year in Madrid, Spain. A former bilingual elementary school teacher, Ryan is currently a Ph.D. student studying language and literacy learning in multilingual settings.

6 Lessons About Raising Bilingual Children from a Non-Native Speaker
Why Raising a Bilingual Child is Always a Work In Progress
Are You Raising Truly Bilingual Kids?
12 Comments

Te felicito Ryan, eres un padre muy padre (in Mexico we say “padre” for cool) Your baby will thank you for your efforts to teach her Spanish, what an asset!

¡Gracias, Xochitl! When I taught on the Texas-Mexico border, many of my students used to tell me about everything que estaba muy padre.

That is great! I love to see committed dads raising bilingual children!

Felicidades, and keep on keeping on!

I can completely relate to your acquisition of and love for Spanish! I know how it feels to have to prove that you speak “real” Spanish. Thanks for sharing, and good luck holding down the Spanish in your household!

Thanks for your comment, Chelsea. In my case, it’s not even about proving that I speak “real” Spanish (what is that anyway, right?), but that I can speak Spanish period. I do think, though, that some of the people with whom I interact may also be trying to prove to ME that they speak English. So, I guess we’re involved in a similar struggle!

Fantastic! I’m struggling with my second child’s Spanish because his older brother speaks to him in English (but HE is fluent in both) and stories like these are a wake up call!! Go Ryan! Thank you for the inspiration and reminder.

Hi, Betty. What you describe is a perfectly normal phenomenon between siblings. Just as you say, because the older sibling(s) usually learns English and begins to understand its value in the United States, they begin to use it more frequently, especially with their younger sibling(s). That’s when we have to stay strong and continue to find creative and meaningful ways for our kiddos to engage in Spanish-language experiences.

This is great. In a few short months I will be the primary Spanish speaker when our child arrives and it is not my first language. I too became passionate about Spanish in middle school and studied in Toledo, Spain in college. I am nervous that I am not going to be able to keep it up because no one in my family speaks Spanish.

I have visited Toledo numerous times when in Madrid. It’s a lovely Medieval city. Please feel free to contact me if you ever have any questions, concerns, or general joy to share regarding your growing, soon-to-be Spanish-speaking family!

Try dropping your “s”s and pronounce “ado” as “ao”….Spanish speakers (mostly Cuban or Caribbean) in Miami will take you more seriously then

It’s funny how that works. Once I went to a Cuban pasteleria with my boyfriend (who is Mexican) and my slight Cuban accent came out (it kind of changes depending on how the people I’m talking to talk). It was funny because the cashier lady said that my Spanish was better than my boyfriend’s and he was born and raised in Mexico (has only spent one year in the U.S.) and Spanish is my second language!….lol, go figure.

Ryan, I am also so glad to find this post. I love Spanish and when I’m not being a stay-at-home Dad, I teach adult ESL to mostly Spanish-speaking students. I’m not fluent but I’m getting better all the time and can definitely speak to my children (6 and newborn) in Spanish, and my iphone is always in reach with my Spanishdict app and Google translate app for the times I don’t know a word. Luckily, I can also ask my students how to say a word or phrase!

I know how long it has taken me to become this proficient in Spanish—didn’t start till college; am now 40—and I’d like to make it easier for my children. I have an insecurity, though, because I’m not a native speaker and I too am the only one in my family who speaks Spanish. It’s nice to see that there are other families like ours who don’t have a native speaker or cultural ties in the family, but recognize the importance of being bilingual!