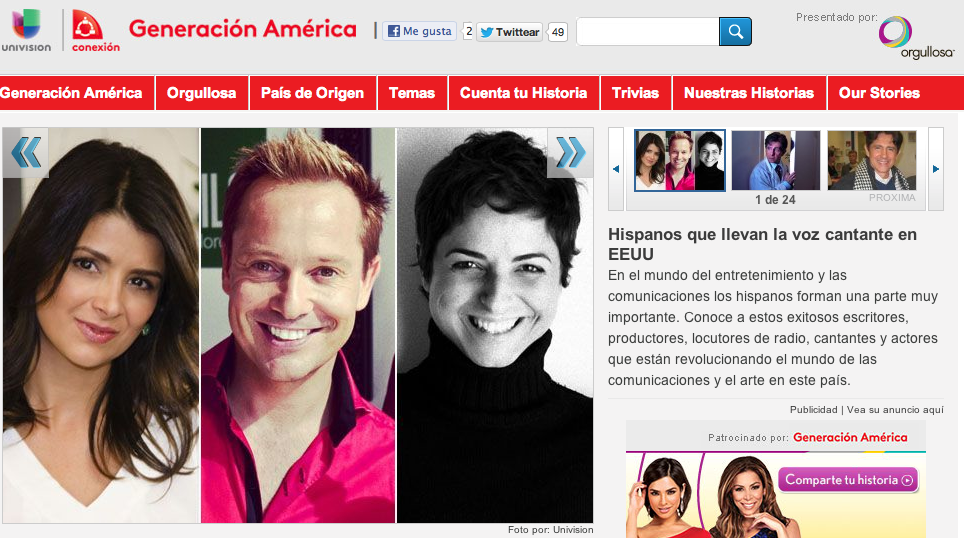 Several weeks ago I got an email from an online producer at Univision saying she would like to feature me on an interview for a new series profiling Latinos in the U.S. that are helping preserve our culture. Of course, I was excited about the opportunity and quickly submitted the responses to the interview questions she had sent me.

A couple of weeks later, she sends me the two links where I, along with SpanglishBaby, had been featured y me quedé con la boca abierta when I realized what an honor this really was.

See, during the Latin GRAMMY Awards broadcast last Thursday, Univision announced the unveiling of Generación América, “a new empowerment platform dedicated to preserving and sharing the stories of Hispanics in America.”

It felt like a full-circle moment since Univision is precisely where I started my career in communications over 15 years ago. I started there because I always knew I wanted to work within the Latino media industry, even if that was slim pickings at the time.

I love the Generación América idea.

Developed in partnership with the Immigrant Archive Project, Generacion America is a multifaceted initiative that includes video vignettes and events to highlight stories of individual achievement. From athletes to entertainers to everyday heroes, Latinos from all walks of life will share their journeys. Univision’s portfolio of television networks, local television and radio affiliates, as well its digital platforms, including UVideos, will feature Generacion America vignettes. Univision will also leverage local stations to connect with the community and capture additional stories of Hispanics with the goal of creating an archive with stories from around the country.

This project comes to life in partnership with Procter & Gamble and its Orgullosa program, which celebrates Latinas who are “Mujeres con la Falda Bien Puesta” and empowers them to seize their limitless potential. To mark the official launch, Orgullosa spokesperson and lifestyle expert Evette Rios has joined Generacion America ambassadors Lourdes Stephen, host of Univision show “Sal y Pimienta” (Salt & Pepper) and Alejandra Espinoza, entertainment reporter from Univision show “Sabado Gigante” (Giant Saturday), to rally Latinas to share their own unique stories with the rest of the community.

I was definitely thrilled to have my story preserved in this platform, and I’m sure so many of you have beautiful, powerful and inspiring stories to share. ¡Habla! Share them!

Community members can participate in the movement by sending in their unique stories via GeneracionAmerica.com, an interactive destination for users to upload, chat, share and connect with others. Viewers are encouraged to submit Spanish or English written documents or videos that anecdote their own journey living ‘the American Dream.’ The most inspiring stories will be selected to appear on Univision Network programs.

Check out our ‘Blog de Bebés’ on Discovery Familia!