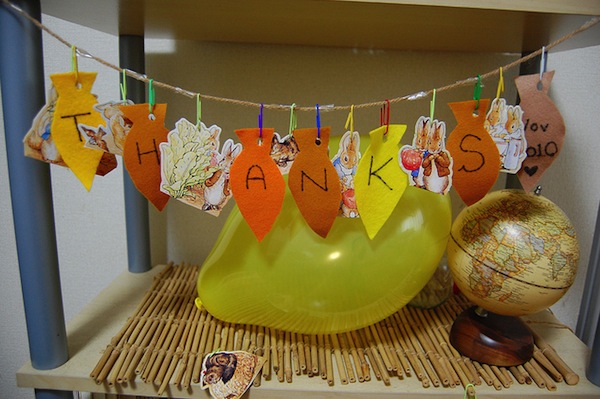 Editor’s note: While we spend a lot of time talking about Latin American traditions, truth is we’re raising bicultural children. Since nothing could be more representative of American culture than Thanksgiving, we decided to bring you a few essays related to this tradition, which most Latinos have so happily embraced. After all, how can we say no to food, family and being grateful, right?

Thanksgiving gives us a chance to reflect on our lives to be aware of and thankful for the many blessings that we have. We always celebrate this holiday with my husband’s family, and it is always guaranteed to be a multilingual and multicultural affair. Both my mother and father-in-law immigrated to the United States as adults. My mother-in-law came from Germany, and while my father in law is technically Dutch, he spent the first twelve years of his life growing up in Indonesia when it was a colony of Holland.

I love that my husband grew up with other languages. His parents are very supportive of our raising multilingual children since they have always had multiple languages in their home. Speaking other languages is not only valued, it is the way it has always been in my husband’s family. The languages used around the Thanksgiving table are a mix of Spanish, German, English, Dutch and a smattering of Indonesian as well.

The real emphasis of our Thanksgiving is a profound awareness and appreciation for the life, freedom, and opportunities that we have in the United States. Having the family together to share so much delicious food makes my in-laws particularly aware of how blessed they truly are. They will usually remind those of us in the younger generations that our lives are pretty good. Seeing life from their perspective helps us to appreciate our blessings rather than take them for granted.

My mother-in-law spent her formative years growing up in war torn Germany. Since her father was deceased, her mother was forced to flee their hometown all alone with two young children. As refugees in their own country, the family was looked down upon and discriminated against always searching for food and shelter. My mother-in-law’s strongest memories from her childhood are being cold and hungry.

My father-in-law spent five years in a Japanese concentration camp with his mother and disabled sister.  His father was forced into hard labor causing the family to be separated until the war finally ended. Lack of freedom, fear, hunger and not knowing if his father was alive or dead plagued my father-in-law’s childhood.

While being at the Thanksgiving table surrounded by all of that delicious food, their children and grandchildren, my in-laws will remember those tough times and share stories with us. We realize that no matter what problems or difficulties we may have in our lives, overall things are pretty good. Reflecting on the past makes us thankful for the life that we do enjoy.

My in-laws came to the United States to start over and find a better life. While they built a new life in their adopted country, they kept the cultures and languages alive from their homelands. At Thanksgiving we are even more aware and appreciative of that freedom to live a multilingual and multicultural life in peace and happiness.

Why Raising a Bilingual Child is Always a Work In Progress

Very touching story, Susan! Thanks for sharing it with all of us here. It’s important for our children to know the history of their ancestors. How lucky that your children can grow up surrounded by such amazing grandparents who value being multilingual and multicultural and who have had such an amazing life. Happy Thanksgiving!