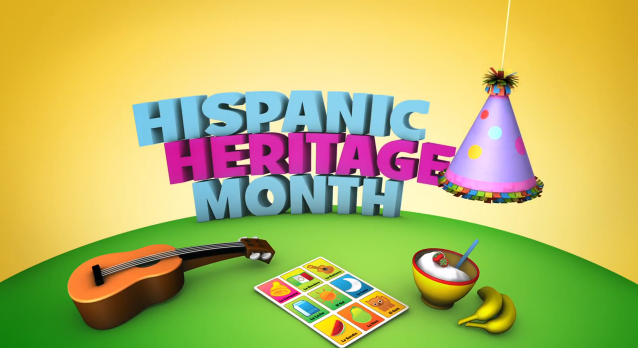 Hispanic Heritage Month is all abuzz with celebrations happening all over the country to recognize the richness of the Latino cultural heritage in the United States. From Sep. 15 through October 15 we have so many opportunities to immerse our children in the beauty of one of their cultures and teach others about it as well.

Disney Junior is joining the celebration with four beautiful :30 second spots featuring Latino children and parents talking about elements of their heritage that they embrace. 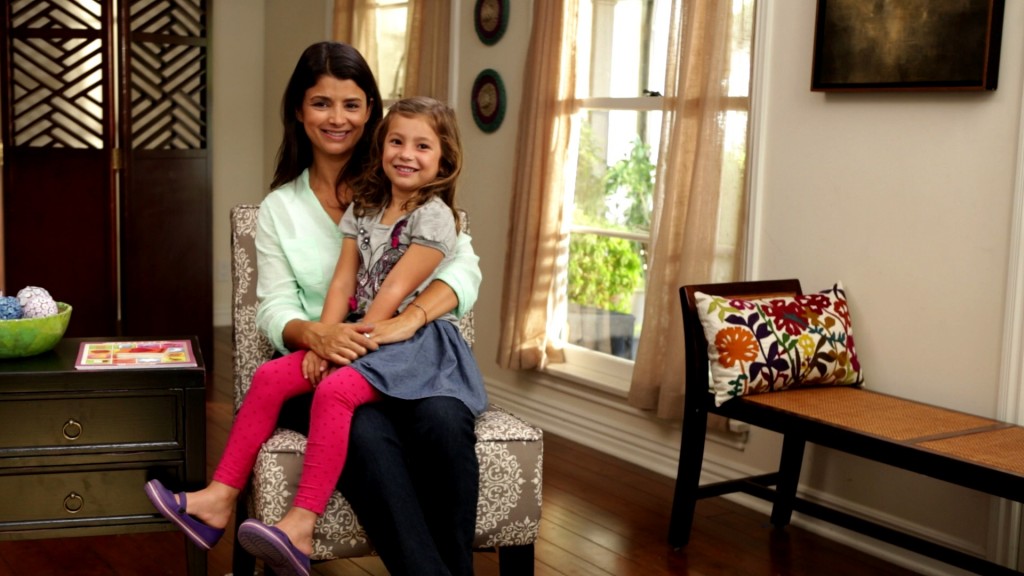 And, guess what? My girl, Camila and I, were invited to be featured in one of the spots! Since we love to play lotería, and it’s a perfect game to practice words in Spanish, that’s the spot we’re on!

Want to take a sneak peak before it starts airing tomorrow (Thursday)? Then press play on the video below!

My girl and I had so much fun shooting these together and now we even have a beautiful keepsake to treasure as much as we do our game of lotería. Camila’s reaction when I showed her the spot was hilarious because she saw the entire thing quietly and with a critical look on her face. When the spot was over, I asked her in Spanish, “Did you love it?” She said, “I did, but that’s not how it is, they got it wrong because I told everyone that after you win, you get a sticker.” Yes, she did say that many times to camera, so I had to give her a quick lesson in how TV is made. Not sure she totally got it, but at least now she’s not critical when she watches the spot! Now, she can’t wait for all her amigos y amigas to see it as well!

Catch all the fours spots airing during Hispanic Heritage Month on the Disney Junior programming block on Disney Channel and on the 24-hour Disney Junior channel.

And remember, your child can enjoy all their favorite Disney Junior shows, like Doc McStuffins and Jake and the Neverland Pirates, in Spanish! How? Just find the SAP option on your cable/satellite provider’s remote and select the Spanish option.

Can’t thank Disney Junior and Disney Channel enough for providing the Spanish-language option and for creating these Hispanic Heritage spots to celebrate our culture. ¡Gracias!

Bilingual is Better: Bilingualism is Better for Your Heart

Disney Junior’s Sofia the First Is Supposed To Be Latina? Why I’m not buying it
Interviews from Disney’s ‘Sofia the First’ Lavender Carpet! {Video}
Disney Channel is Casting for Latino Tweens and Teens
43 Comments

What a cute spot! Your daughter is adorable. Love her sticker comment (my son would’ve said the same thing!). I never played loteria growing up, but I’m going to start playing with my little one. He’s really into practicing his Spanish, and loves watching his favorite shows in Spanish.

Thanks, Barbie! Loteria/bingo is really such a fun game and perfect to teach kids some basic words in Spanish. Also great to teach them to learn to lose and win!!

Love it! Love the children’s loteria game pieces you are playing with!

Disney had these made for the spot and I’m trying to get my hands on it!!

How CUTE and exciting!! We miss you guys!

LOVE it. Camila cracks me up every time. The spot is perfect and the behind-the-scenes is hilarious.

How fun!! I posted it on Franklin School facebook page

Where can I buy this game? I think my son would love it and I really want him to learn some Spanish!

Love the commercial! Ever since my son first saw it hes been wanting to play “Loteria” Where can we find a game set like the one featured on the commercial? I have been looking online and haven’t had any luck

ugh I wanted this loteria set too. I do not want the adult version for Lillie.

Yes, please tell us where we can get it? I grew up on loteria and I’d love my little one to play too but the traditional loteria is not age appropriate.

Please let us know where we can find the loteria game featured. My 4 year old really wants it for Christmas.

Hi Yesenia,
They actually created one just for the promo shoot. It’s so cute I wish they would make one!!

Bummer!! I will have to try to find something similar that is bilingual. Thank you for the response. -Yesenia

Have you seen the Eboo Spanish Bingo featured in our Holiday Gift Guide? http://spanglishbaby.com/holiday-gift-guide-bilingual-kids/

No, I hadn’t seen it. Thanks for sharing. I will definitely check it out…Mi chiquita le va a encantar!!!!

Please let us know where we can find the loteria game featured. My 4 year old really wants it for Christmas & her birthday is right around the corner. I’ve also searched online and only find the traditional game.

You’ve made some good points there. I looked on the
net for more info about the issue and found most people will go along with your views on this web site.

Hello,
I love that loteria game for kids!! Every Christmas, our family plays it and that would be great for the kids. I want one of those. I know they do not mass produce these but you should talk to Disney about doing so. I think people would buy them. I want a game set really bad!

If you are having skin problems, before you start using medications and chemical, look at what you eat.
In the 21st century most people don’t think outside the box when it comes to a diet plan. He
may also know how a particular diet may be formulated and followed.

Think about on a regular basis you’ll save by having a Residential Dumpster Rental 61759 outside!

Most protein shakes are loaded with sugar, fat, and other
ingredients that aren’t even necessary for the body.
As mentioned earlier, Visalus seriously isn’t a gimmick.
Ryan Blair is the CEO and is the embodiment of the Vi – Salus vision.

Hurrah! In the end I got a website from where I can in fact get useful facts concerning my study and knowledge.

Also, if your business works alongside an affiliate, it’s probably a good idea to mention their information too.
So do you ever wonder whast happens to those cards you haand out.
Another common misconception regarding business cards
is that you should try to gett yourr quality custom card to as many people
ass possible and should therefore print out as many cards as
you cann effectively print. Seeing it 4-5 times will start to imprint on people’s minds.

What’s up, yup this post is genuinely nice and I have learned lot of things from
it about blogging. thanks. Online tv indonesia

. Our team likewise deliver opportunities for up as well as arriving
music producers around the world to market their music online.

What a information of un-ambiguity and preserveness of precious familiarity concerning unpredicted
emotions.

I’m not sure where you’re getting your info, however great topic.
I needs to spend a while studying more or figuring out more.
Thank you for wonderful info I used to be on the lookout for this information for my mission.

This is a good tip especially to those fresh to the blogosphere.
Simple but very precise info… Many thanks for sharing this one.
A must read article!
%url

But I concur that this involvement ring need to not be called
a horcrux as just one of the 3 hallows was ever one.

I blog frequently and I seriously appreciate your content.
This great article has really peaked my interest. I
will book mark your website and keep checking for new information about once per week.
I subscribed to your Feed too.

You do not require lengthy cardio workouts experiencing
expensive equipments to burn some fat and also slim
down.

Well, you should not gamble with your health but that does
not mean that you shouldn’t put in place the necessary financial plans.

Musculoskeletal pain and reflex sympathetic dystrophy are claimed to benefit from the therapy also.
A potential new treatment option seems to provide relief for this condition.

This is my first time go to see aat here and i am genuinely impressed to read everthing at one place.

Foor a better solution please take a look at
this web-site :: viril booster

We will certainly have a one hour lecture monthly given by professionals
in wild medicine at Stanford Medical Institution.