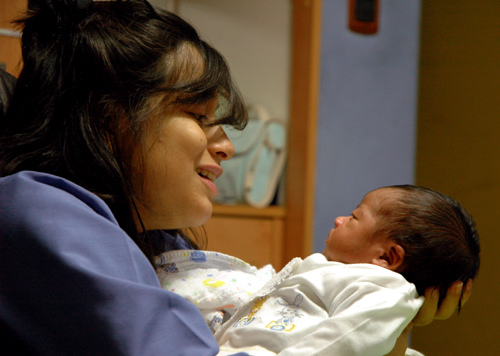 With babies and toddlers there is always a time when a lullaby comes to our rescue. And yes, I mean rescue because lullabies are fundamental to sooth a crying baby or simply to create the right bedtime environment. These songs are useful not just to lull the baby to sleep but also any little brothers and sisters who may be around.

Lullabies in all languages have put to bed millions and millions of babies, all over the length and breadth of the world. All of them share the necessary elements to put the baby, and even ourselves, at ease: rhythm, melody and story. And that is precisely what fascinates me the most, that there is a story behind each one of them, a story that reveals customs, lifestyles, fears and the unique ways in which each culture values babies and toddlers.

There are many beautiful lullabies in Spanish, many of them with recurring topics such as the urgency for children to fall asleep and allow their mothers to carry on with their domestic tasks. This is the case of Este niño lindo and Duérmete mi niño.  Aruru mi niño, Muñequita Linda and other similar songs focus on conveying the baby’s beauty, while those with their origin in popular folklore, such as Arruru la faena, speak of the mother’s arduous labor.

Some lullabies like Duérmete mi niño have threatening themes involving wolves and bogeymen; others like Arriba del cielo talk about selling children. Some lullabies, like Señora Santa Ana or A la rorro nene, have been used for centuries to lull Baby Jesus in Catholic and other Christian celebrations. And, of course, there are many lullabies in English that have been translated to Spanish, as is the case of Todos los caballitos lindos (All the Pretty Little Horses).

Regarding the lyrics, I must say that I love the use of the words “roro, rorro, arroró, aruru” used to denote rocking movement or to say that the boy or the girl is very pretty.

Not all lullabies can be found in books or the Internet. I mean those in which parents or grandparents sing from their own imagination, usually basing their songs on a familiar tune and making up their own stories as they go along. As unbelievable as it may seem, some become part of the family tradition, generation after generation.

Making up your own lullabies could be a fun activity which could help you further strengthen that essential bond of safety and trust between you and your kids, for lullabies are, without doubt, songs for the soul.

What is your favorite lullaby? Have you ever tried creating your own lullabies? Share with us; we’d love to hear from you!

When Parenting Gets Tough

“Los Pollitos Dicen” is our favorite. My daughter now sings it to herself too and I’m always impressed because we’ve never really sung it together (as we do other songs), it’s just that she’s heard it all her life. So in that sense of course she knows it! Still, I am wowed by her ability to nail the word “acurrucaditos” which if I think too much about it will trip me up and which my husband frankly glosses over (his español being somewhat more theoretical in nature).

Oops, hit enter too soon! I meant to include that when m’ija was an infant and had a hard time going down for naps we used to sing a not-at-all lullaby song to her that worked like a charm– “La Pulga de San Jose” – maybe it was the repetition, I don’t know. But we would sing it and she’d fall asleep. Sometimes if she was fussy and we were out and about on the town, we’d sing it to her while she was in her baby carrier and she’d fall right asleep. We must have looked pretty silly, wandering down streets, the grown-ups singing our heads off, and a baby nodding to sleep on her mami or papi’s back… One time that I remember particularly well it was nap time and we found ourselves in a pulga in Athens, Greece, I was so excited to sing “La Pulga” to her. Sweet memory.

check out these lovely songs. written specifically with lots of repetition and catchy tunes

songs .. listen to these samples. my kids love them

sorry forgot to add the link!

I found La Manita on a lullabye album by Lisa Loeb. It
Is short and easy to remember. I cried the first time I heard it
And sing it to my newborn son all the time.

Oh, I need to look for that one! thanks!!

There is a line out called Baby Abuelita and they are these dolls that sing Spanish nursery songs and lullabies. I bought my daughter, who is 5 months, the Baby Mimi doll which just plays the musical tunes of songs. When she gets older and begins to understand a little more I will buy her the other dolls that actually sing the Spanish songs. They are really cute and they are great to help us teach our kids the traditional Spanish songs that we loved to hear and sing as children. Here is the website for anyone who is interested. www. babyabuelita.com