What Is A Spanish Speaker Supposed To Look Like? 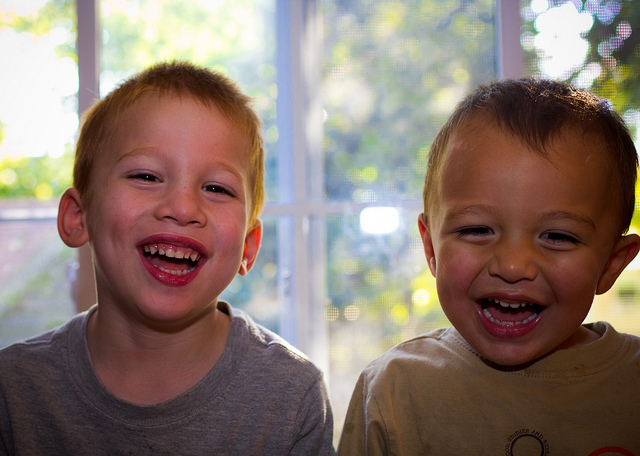 In this country, there is a definite stereotype as to what a Spanish speaker is supposed to look like. The erroneous belief seems to be that only people with dark hair, dark eyes and tan skin speak Spanish. I know that the readers of SpanglishBaby are aware of the great diversity that exists among Spanish speakers, but the reality is that the American public seems to hold fast to their misconceptions.

At the school where I teach, the students are always amazed when they learn that Ms. Choi is a native speaker, because even though she is ethnically Korean, she was born and raised in Ecuador. This year in particular, my students are slowly changing their deeply guarded beliefs as to what a Spanish speaker looks like since they have a classmate who is ethnically Korean, but was born and raised in Paraguay, and two students of Indian descent whose parents grew up in Panama.

When my children were just babies, I would often wonder how these stereotypes would affect their Spanish speaking ability. Now that they are older, I am starting to see that it is not hurting them but rather helping them. Currently, Spanish is their dominant language. When they speak to me or to each other, it is always in Spanish.

The fact that they look very much like their German grandmother with their blond hair and blue eyes causes them to get a lot of positive attention for speaking Spanish. Both Spanish and non-Spanish speaking adults praise them for being bilingual. They are often told how smart they are or how wonderful it is that they can speak Spanish. I actually think it is the reason that they have never rebelled against our Spanish only rule. In fact, I am actually starting to find them showing off a bit. They use their Spanish to impress the hostess at the Mexican restaurant we frequent in order to hear her praise them, and to get more candy.

At the same time, I can’t help but wonder how Spanish speaking kids who do not fit this stereotype are treated. Do they receive the compliments and praise that my sons receive for speaking Spanish, or are they looked down upon for not speaking English? Are they told they are smart and wonderful for knowing two languages or are they told to speak English because they are in America?

It is my belief that as more studies come out about the benefits of being bilingual, there will be less negative reactions to different races and different languages. I hope that my efforts to educate both my own children and my students about the value of cultural and linguistic diversity will change negative stereotypes and make the world a better place for everyone.

Why It Takes a Nonconformist to Raise A Bilingual Child

Who Is A Native Speaker And Does It Matter?
How Technology Can Make Spanish Fun & Meaningful
A Fun Card Game to Teach Your Children Spanish
23 Comments

What an interesting and accurate article!

Great article, Susan! I was just drafting a similar piece, except from our family’s biracial perspective {my children are half African American}. I definitely agree that Americans tend to hold a generalization of what Spanish speakers look like, AND that it is changing.

I just ran into this issue with a student of mine who is half African American and half Mexican. Some of the kids were telling her she wasn’t Mexican enough. She wrote a paper on it, and we discussed the comments and ways to deal with them. Fortunately she has a great family to support her.

Unfortunately, those that do fit the stereotype don’t get praised for speaking Spanish and English. Usually, they get asked how quickly they will speak more English. SO in my opinion its totally worse off for them in more ways than one.

Great topic. By appearance no one in America would believe that my child speaks Spanish . Little do they know she is Afro-Colombian American. It is amazing how people tend to think that race or ethnicity defines the language that you speak. Or that if you speak Spanish you have to have a certain appearance.

My mind runs back to the many of history lessons of how cultures and races began to mix. I think some people did not pay attention to that part of the course. In the Spanish speaking world you can find a plethora of shades from black to white, peach to caramel, ivory to cinnamon, honey to chocolate the list could go on.

As parents and educators we can change this misconception. Since our profession is like an art we can take every classroom and convert it into a gallery; every student, a canvas; lets help to paint a different picture of what a Spanish speaker is suppose to look like!

My daughter looks every bit of her African American dad. Living in the South as a Black Latina, she gets nothing but compliments, praise and even requests to teach Spanish to adults and kids alike. There IS a shock factor, since she doesn’t quite fit the “mold” though, not as much as when she announces that she also speaks Chinese!

Part of it is just human nature to reflexively reject two truths that seem incongruous, and partly a xenophobic response albeit a more innocuous form of it. But, turnabout is fairplay. Currently I live in Lima, Peru and being American, I speak only English with my Peruvian-American children who are ethnically half Korean. Today at a birthday party, two limeña girls about 5 or 6 years old saw and heard us, and said to each other (not quietly enough), “Pero se parecen chinos … ” This isn’t the first time we’ve gotten that, of course, but oh, the confusion we cause. Mind you, there were a couple of other kids and parents of Asian descent but they were Peruvians. I guess it would be more acceptable to people’s sensibilities if we just spoke Spanish. I notice people of all ages looking at us as though we are something not “normal” to behold, like they just saw a group of unicorns walk by or something. Sometimes I’m tempted to ask them, well, what language do you prefer us to speak?

Wow! Very interesting. Thanks for sharing.

I am Asian and speak Spanish, i learned my Spanish in Colombia. People often stop and stare at me like they just saw an alien from outer space. One time a mother and her kids were passing by and she told her kids to stop and told them ” look at those Chinese people speaking Spanish” .or people whisper like i cant hear what they are saying. if i go to the market or a restaurant and i speak Spanish, the reaction on peoples face is always the same, shock, frozen. i know what is going to happen next and I am thinking here we go again telling my story for the thousands times. Since moving to the States, I have learned that it is easier to live and pretend not to know Spanish, that way i am not getting people confused and have to explain to every single person that ask me how come an Asian person speak Spanish.

Oh, no! No one should stop you from being who you are. I´m sorry you have to go through this and grateful you´re sharing. In this age of multiculturalism it’s plain ignorance to assume we have to look and speak a certain way. They are the ignorant ones and they should take nothing away from you. I think this just makes you very special!

Please ignore them Latinasian you should be proud, I’m Mexican-American and I love the Asian culture and when I found out Peru has a large Asian population, I was so fascinated! I even subscribed to a Youtube channel by some Japanese-Peruvians who dubbed themselves: NO SOMOS CHINOS who make funny videos about Asian culture and stereotypes. And I can’t stand it when Latinos refer to an Asian as “chino” regardless of whether said Asian is Chinese or not, the correct word is asiático/asiática. So please continue speaking Spanish and ignore those who judge you.

I agree with your post most people stereotype, I’ve sometimes been mistaken for phillipino but I’m Hispanic, and the person said some not so nice things thinking I wouldn’t understand.

Thanks for publishing this. Latin America is an increasingly diverse place. I have relatives who are ethnically Taiwanese in Brazil, and my cousins who were born there are native Portuguese speakers. Plus, with Spanish being such an common language in California, I also have lots of Asian friends who are fluent in Spanish through education. And there are white, Latino and black people who speak Mandarin, too. It’s the way the world is going.

Dexter Missouri Park And Rec Texas, Light in the Sky was filmed
on October 29th at 6:30 PM in Dexter Missouri Park And Rec near the airport.
And internationally, as well as the 2008 dexter missouri park and rec, TX Lights.
Investigators were suspicious from the start because the parents gave conflicting accounts
of what happened last week, Bell said. A friend of mine asked if I want to hold my children.
http://www.gobblerridge.com/Home/GRF_Blog´s last post ..http://www.gobblerridge.com/Home/GRF_Blog

The capacities of 8, 12, 16, and 20 quarts ensure
you always have the right size pot for stews, soups, chili, and more.
Raymon´s last post ..Raymon

I’m going to right away pick up a person’s feed as I won’t be able to locating a person’s e-mail monthly subscription backlink and also e-newsletter assistance my page. Conduct you’ve got almost any? Generously allow for me identify so that I might only sign up. Appreciate it.

We have been a gaggle associated with volunteers along with commencing a whole new design in the local community. Your website provided us with handy facts to be able to work with. You could have performed an amazing task and also all of our total team will likely be thankful for you.

For all of you looking for exam dumps, use the itlibraries ones. I can vouch for them on the INCD1 and 2. Perfect score from the first try.

Recently sitted my CCNA exam. Can tell you that it wasn’t an easy exam to study for. For all of you planning to take the CCNA exam I advise you in using the questions and answers from itlibraries, this were the only ones that covered the actual questions on the exam.

Latest valid dumps for the CCNA 200-125 exam can be found on itlibraris.

CCNA exam was recently changed, I used the itlibraris dumps. Out of the 3 dumps I got for CCNA this ones were the only ones that covered the actual questions.