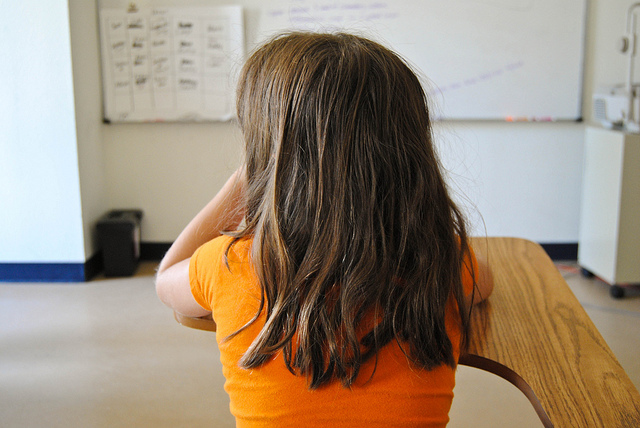 Growing up, I had always been proud of my Mexican heritage. I spoke Spanish at home, and I based many of my school projects on Mexican history and folklore.

That all changed in fourth grade… when we studied the Mexican-American war. I proudly exclaimed that I was Mexican, and Brian Wedemeyer and the rest of the boys in my class began to tease me. In the 1980s, Leesburg, Virginia did not boast a lot of diversity, and in that moment, I realized I was different. And, to fourth grade little me, different was bad.

I stopped speaking Spanish at home and started answering my Mother in English, downplaying my heritage to my peers. As the years wore on, speaking to my Grandparents, who I was very close to, became a huge challenge. I started feeling embarrassed when I stumbled on words or made grammatical mistakes. I was starting to withdraw…

And then my parents had a brilliant idea – as I look back, it was a bilingual/bicultural intervention:

My parents decided to send me back to Guadalajara to study ninth grade, or tercero de secundaria.

I would live with my beloved Abuelitos and attend the same Catholic all-girls school my Mother did as a child, and where her sister taught history and social studies.

The school system was different than in the States – we were on a trimester system where, in the case of math, you studied algebra for the first trimester, geometry for the second and trigonometry for the third.  It was the same with science – a rotation of biology, chemistry and physics. These were subjects I was not very familiar with in English, let alone Spanish. Another novelty was the monthly report cards with 10 corresponding to an A and 5 meaning you had failed the course.

My classmates didn’t know what to make of me. I had an American-sounding name and they were fully expecting a blonde, blue-eyed gringa, yet there I was, dark-haired with brown eyes speaking Spanish with the strangest of accents. As an awkward 13 year-old, I was the youngest of my class, which put me at a disadvantage as most of them were turning 15 and planning their quinceañeras.

I struggled… both academically and socially.

While my classmates had their English class, I was being tutored in Spanish literature and grammar. Most teachers dictated notes during their class, and during my first few months, I wrote everything down as I heard it phonetically, especially if there were words I didn’t recognize. I was thrilled to discover that, despite these challenges, my Mother had taught me to read and write in Spanish very well – my Spanish teacher, Señorita Esperanza, even remarked to the class, “¡Hasta la gringa tiene mejor ortografía que ustedes!” which caused me pride mixed with embarrassment.

As the months went by, el acentito no one could place disappeared. I eventually took notes correctly, and one month even managed to make La Escolta, which is the student color guard that carries the Mexican flag during the pledge of allegiance – an honor reserved for the top academic students. During Semana Santa, my school led a trip to the rainforests of Tabasco to help teach indigenous underprivileged children to read – it was an experience that truly humbled me and has stayed with me all these years. And my Abuelitos were so proud!

I lost my Mom’s sister, my Tía Rossana, the year after I came home from my year abroad. My Abuelito followed eight years later, and my Abuelita recently passed in 2008. For me, getting to know them on a deeper level was a blessing… How lucky was I to have lived with them…

The Spanish I have today is the gift from my year in Guadalajara, although maybe el acentito has returned. And thanks to the friendships made and the tight family bond that was forged, perhaps my children will get to have the same opportunity – and get to know their extended family and culture in a deep and meaningful way.

Jennifer Walus is originally from Guadalajara, but grew up in Virginia where she was raised in a bilingual environment. She went on to study Italian and French at Dartmouth College and as a result has been interested in raising her own children in a multilingual environment. She currently uses the OPOL method at home with her daughter Siena, 5, and son Christian, 2. A marketing expert with nearly 15 years of experience, Jennifer credits her multicultural background for her strong record of developing national and regional public relations campaigns for both the general and Hispanic markets across a wide range of industries, including consumer packaged goods, national and local associations, food, travel and tourism, public affairs, corporate social responsibility, and healthcare. She is currently a freelancer juggling the joys of mommyhood with part-time strategic consulting.

Memories Of My Bilingual Childhood
Native Language In School Benefits Immigrant Students
Your Story: If Only I Spoke Spanish
6 Comments

What a great story. I would love that kind of opportunity for my kids and myself someday

Not only did you acquire your language skills – but that sense of tradition, family, and culture is something you were able to embrace forever. How awesome. Thanks for sharing.

Thank you for this inspiring story! I, too, want to give an opportunity like this to my daughters. My husband is from Guadalajara as well and because of your article, we are going to look into spending a year or more there in the future. We have 4 daughters ages 7, 4, 2 and 7 months. When they can all walk and talk (that’s our big goal for now!) we would love to go there.

Can you please recommend a few good schools (elementary) where the girls will get a great education, both with the language and basic academics. I am a high school Spanish teacher but would love to teach English while the girls are in school in Mexico. Do you have any suggestions for me also? Ideally we could all go to the same school in the mornings, me teaching and them studying.

Thanks for the great idea, I can’t believe I didn’t think of that sooner!!!!!!

Much has changed since I was there but I went to El Instituto de la Vera Cruz and had a lovely experience! Best of luck!

What I love about your story is that you were 13 years old. As parents this is the age where even the most confident of us feels uncertain about our decisions, if the kids aren’t on board with the idea. It’s especially hard when we make decisions that don’t help our teenagers “fit in”, even maybe do just the opposite, precisely at a time in their lives when they think being part of the crowd seems so important. Thank you for sharing that this was a tough time for you initially, and how wonderfully it turned out.

What a great article! Each of my three kids did a year of preparatoria in Guanajauto, Gto when they were 15 (they had spent their summers there for years). Their experience was very similar to yours and they have continued to spend Christmas vacations and tine each summer there since.

We have some friends who just spent a year in Gto. with their two children who are 7 and 10. They went to the Montessori school and had a wonderful experience. For anyone who can go with their kids, it would be an amazing family experience, I’m sure. If not, in the right place and with the right support, a high school student can have a great experience.

Thank you for sharing your experience!

hello. I’m algerian and live in france. Your story remembered me exactly the same story as many of algerians here completely trapped between 2 worlds ! The most difficult I think is always to make a choice between your “home nationality” and your “country nationality” . I didn’t know it was the same for some mexicans in the US…