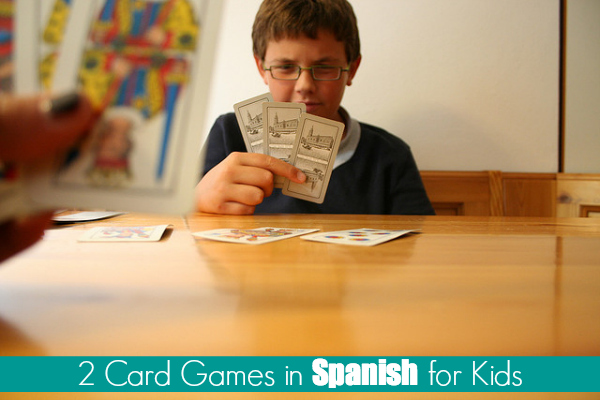 In our family, card games and language go together. Whether we are playing escala cuarenta in Peru or cribbage in Wisconsin, there is constant banter and conversation. When my kids were little, simple card games often led to delightful interactions. Now that they are older, I appreciate the language and social skills they learned from the games.

Children of any age can play Batalla de Velocidades and Batalla de Tamaños. They are based on the traditional game La guerra (War) in which two players each have a stack of cards and turn over the top card at the same time. The higher card takes the lower card. If the cards are the same, players put three cards face down and then another face up. The higher value card takes all of the others.

With these printable cards, kids compare the speeds of animals or the area of countries. The information is on the cards, so the comparison is easy. Before they start, players decide which cards are going to have more value. Bigger and faster do not have to win. As children know from Aesop’s Tortoise and the Hare fable, the fastest animal does not always win the race. They can choose to have slower animal cards take faster animal cards and smaller countries be of more value than larger countries.

There are 12 animal speed cards and 17 country area cards. To play, print 4 sets on card stock and cut them apart for a total of 48 animal cards or 68 country cards. The cards are in black and white, so kids may want to color them.

The PDF’s below include information about using articles (el, la) with country names and about agreement when numbers are used as adjectives.

Speaking Spanish with Kids as You Play

Depending on the age of the players and their level of Spanish, you may want to talk about the vocabulary and the numbers before you play. Kids do not have to say any numbers to play the games. They can tell which card wins just by looking at the numbers. The information is interesting though, and the country cards in particular are a low-pressure way to practice saying large numbers.

If the vocabulary is new, talking about the words before you play lets kids hear the words pronounced correctly. For children who read in English and are learning Spanish, there is a tendency for written language to influence their pronunciation, especially with cognates like Japón and Rusia. Batalla de Tamaños is an excellent way to learn the names of countries in Spanish and how to pronounce them.

In addition to vocabulary and numbers, children will practice comparisons with these games. Below are examples of sentences you can use as you play.

You can make cards for other animals and countries to add to the sets. Of course, these cards can be used for other games too. So, when summer afternoons get long and kids are looking for something to do, try a game of Batalla de Velocidades or Batalla de Tamaños and have some summer fun en español.

Special thanks to Spanish Playground for providing this activity. Visit their site for more activities to teach Spanish to kids.

Wow! After all I got a webpage from where I know how to actually obtain
valuable information regarding my study and knowledge.

These are great games! Thank you for linking up to Linky Lunes…I will definitely be using these with my students this fall.

There are a lot of plan choices as meals baked when it comes to
special diets. It will take time for the food to be ready and you,
the cook, must learn to welcome this about Cajun food.
The main job of the cooks is to prepare and serve regular meals to the
ship’s crew and passengers.

Jennifer raised her three children speaking Spanish and English. She holds a Master’s degree in Spanish Literature and has been teaching Spanish for over twenty years. She shares resources for teaching Spanish to children on her website Spanish Playground.

View all posts by Jennifer