7 Fun Board Games to Play in Spanish 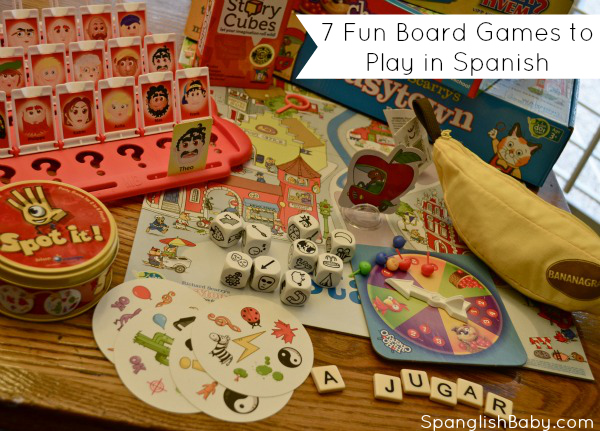 My family loves to play juegos de mesa: from Candyland to Monopoly to dominó, it’s a chance to have fun as a family while speaking lots of Spanish. Some games that we love can be manipulated a bit to play in Spanish, such as Pictionary, Taboo and Scattegories. But here is a list of our favorite board games to play that encourage lots of communication and reinforcement of concepts, without the need to change anything or buy a “Spanish version.”

1. Guess Who? (ages 5+): This game is perfect to practice asking questions about physical features, as you slowly eliminate characters to guess who’s card your opponent has. I have played not only with my kids, but my Spanish 1 students! It’s a great game for non-native speakers to play with their children once you have the basic vocabulary.

2. Spot It (ages 6+): This face-paced game requires players to identify objects that are the same on pairs of cards. Of the 50 plus items in the game, there were several that I didn’t know in Spanish (such as snowflake and padlock), so both the kids and I were increasing our vocabulary. It is a really easy and fun game for families, and though it says 7+, my 5 year olds loved it too. Spot It, Jr. (ages 4+) contains animals, for additional vocabulary practice.

3. Rory’s Story Cubes (ages 6+): Guided story-telling, that gets your creative juices and Spanish flowing as you try to incorporate all of the pictures on the dice in your story. The game box is the size of a deck of cards, perfect for taking it to play with your abuelitos! It’s easy, and enjoyable for all ages- and the kids also love when they get to listen to the adults’ stories. Sometimes we let the kids get together in teams to help them “warm up.”

4. Tell Me a Story (by eboo, ages 3-8): Similar to the Story Cubes concept, but for a younger audience, this adorable game consists of beautifully illustrated cards with different scenes that players use to weave a story. A simple game with endless creative possibilities, you can play this at home or on the go, and engage the whole family in Spanish story-telling.

5. Bananagrams (ages 6+, or any child that is beginning to spell): This banana full of letter tiles lends itself to multiple different games. While the idea is to quickly spell as many words as you can that connect like a crossword puzzle, we let our little kids just make words while we play. We have the English version, and have the kids spell in Spanish, but I did find a Spanish version on amazon if you’d like the additional tiles of rr, ll, and ñ. After playing a couple of times, I noticed a dramatic increase in their confidence of spelling in Spanish!

6. Richard Scary Busy Town (ages 3-8): Cooperative board games (where players work together to reach a goal) are becoming more popular for families, especially when the children are of different ages. In this game, you will work together to prevent the pigs from eating all of the picnic food by finding objects (on cards). We’ve told our kids that the game is in Spanish, and although there aren’t written words, they believe us and solve the problems in Spanish! My kids love the 6’ long board, and the little magnifying glasses you can use for the i-Spy aspect. This game is great for decreasing sibling rivalry, as everyone is on the same team.

7. Hi-Ho Cherry-O (ages 3+): This classic game, like Candyland or Chutes and Ladders, is perfect for pre-readers, who are learning to take turns and count. While the Spanish used will be quite simple (numbers, and simple phrases like “te toca a ti Viviana”), starting to play games with your children while they are young will build critical thinking skills, help kids to follow directions, play fair, and be graceful losers; and playing in Spanish will help them have fun while practicing the language!

What are your favorite board games to play in Spanish? Which ones have I missed?

Join Us for Our First SpanglishBaby LIVE Google+ Hangout

A Fun Card Game to Teach Your Children Spanish
Introducing Our Contributors: Susan
How Soccer Motivates My Kids To Be Bilingual
25 Comments

Great suggestions! Once the kids are older and playing Bananagrams as the real game you will definitely want the Spanish version. The letter distribution is different. There are a lot more vowels and you need them all!

We will have to get the Spanish version, especially as they begin to spell more in Spanish.

There is a Spanish version of Spot-it. My high school students love it!

We love board games! thank you for sharing Becky!

Us too! Glad you enjoyed!

nice and helpful ideas! thanks!

Thanks!:) Add on any others I may have missed.

Great ideas, Becky! I definitely play Guess Who! with my son in Spanish and that gives us the opportunity to use words that don’t come up often in our daily speech to describe people (moustache, beard, etc.). We also have the Bananagrams in Spanish and Richard’s Scarry’s Busytown. Zingo is the only other one I can think of that I didn’t see above. We have both the English and Bilingual versions and while there are pictures they can refer to there is still vocabulary use plus the vocabulary of taking turns, etc.

Ooh, I have never played Zingo! Is it like Bingo? I will have to look for it!

Yes, the only slight difference is that there is a “Dealer” who slides a dispenser back and forth to reveal the two tiles and whoever has them on their board, grabs the tile and puts in on the correct space. Which is good to me since little “fichas” always seem to get lost but since these tiles store in the dispenser, it’s pretty easy to keep track of them. It’s best for an adult or older child to be the dealer, at least at first.

Ooh, that’s great! It sounds like a really great game for learning vocab- thanks for sharing!:)

I am not a native spanish speaker but am taking a degree in Spanish – I don’t have children yet, but love your blog, would you recommend a non-native speaker to teach their children Spanish? I worry I would not teach them 100% correct pronunciation and grammar, but I think it’s important kids start learning other languages at a young age?

YES! I would absolutely recommend a non-native speaker to teach their children Spanish. I am not a native speaker of Spanish, and I am giving my kids about 90% of their input. I also worry that my pronunciation might not be perfect, definitely I slip up on grammar or miss vocab words (I just learned how to say pinecone and acorn!) but the truth is there are so many things you can teach your kids, and so many ways to expose them to other Spanish-speakers to give them even more exposure. I think as their parent you will give them a strong foundation of Spanish, encourage an appreciation of the culture, and the ability to develop a bilingual identity. You can do it!:)

Hey there, my name’s Marylyn and sometimes I write about the same thing on my blog. Actually, if I may, let me ask you something.. Could it just be me or does it look as if some of the comments seem like they are coming from brain dead people?

Thanks to this post I have ventured to buy some board games to teach my son Spanish! I even bought the Spanish version of Bananagrams! Thank you for submitting this post to last month’s multilingual carnival! http://discoveringtheworldthroughmysonseyes.blogspot.com/2013/10/raising-multilingual-children-blogging.html

I love this list! I have been offering an after school class at my daughter’s school ( a board game class in Spanish ) and it’s been so fun to watch their vocab development! Thanks for posting this, I look forward to more posts like this.

I was suggested this web site through my cousin. I am no
longer positive whether this put up is written by means of him as
nno one else understand such exact abbout my problem.

Hi I just read the games you mentioned. I just have one question I am guessing all these games apart from the bananagrams that can ne purchase in Spanish all the other games are in English and can be use to play in Spanish. It’s that correct??

Undeniably imagine that which you stated. Your favourite reason seemed to be at the
web thhe simplest factor to bee mindul of. I say to
you, I definitely geet annoyed even ass other people consider worries tthat the just doo not know about.
Youu controlled to hit the nail upon the top and also defined out the entire thing without having
side effect , other folks could take a signal.

Will probably be again to get more. Thank you

Woah this blog is excellent i enjoy learning your content regularly Video Poker Game ,. Continue the excellent works of art! You recognize, a lot of people are seeking circular due to this details, you’ll be able to help them tremendously.

I would not disappear completely your website just before hinting we actually experienced the normal details anyone contribute towards your invited guests? Will likely be once more normally . Play Video Poker ,Play Video Poker Game,in an effort to examine cross-check brand new articles

Hi I just read the games you mentioned. I just have one question I am guessing all these games apart from the bananagrams that can ne purchase in Spanish all the other games are in English and can be use to play in Spanish. It’s that correct??