How Soccer Motivates My Kids To Be Bilingual 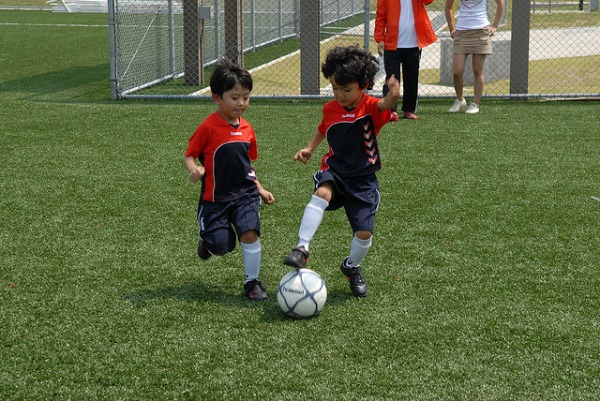 One of the best ways to motivate kids’ Spanish speaking is to find a way to tie the language to their interests. My sons love soccer. My husband grew up playing soccer and loves to watch the games, which is how my sons became interested in the sport. My boys love it, whether it is watching the game, kicking around a ball, or actually playing.

Aside from being probably the most popular sport in the Spanish speaking world, there is also a significant Spanish speaking fan base for the sport here in the United States. We are fortunate to live close enough to the stadium where Major League Soccer games are played. When we attend LA Galaxy games, the announcements over the loud speakers are in both Spanish and English, the fans are a diverse mix with a lot of Spanish speakers in attendance, and of course there are the Hispanic players. My sons can’t help but hear and speak Spanish. Soccer has helped further their language skills, and enabled my sons to see the relevance of knowing another language.

It is not just the game that intrigues my boys, but the music and videos that celebrate soccer too. They really enjoy listening to music that is about soccer, and they sing along with the tunes. Here are some of their favorite songs and videos that have soccer as a theme:

Ricky Martin’s “La Copa de la Vida” which was the official song of the World Cup in 1998.

Music always makes learning fun, and when it is about a topic that interests my kids, even better.

Whenever we take a soccer ball to the park or the beach, we always have other young kids join in the game. I am happy that the game attracts a diverse mix of kids to play. We almost always meet other bilingual children too, which results in the use Spanish during their play.

While soccer is a game that my boys love, it also supports their bilingualism. Fostering my children’s interest in their favorite sport has benefited their language skills, and yet it has also been fun for them to play, watch games, and even sing about soccer. Tapping into our kids’ interests and finding ways to tie those to Spanish is one of the best ways for them to learn.

Look at All the Back to School Clothes We Got for $100!

I agree with every word you say Susan! My 9 year old loves soccer and in our recent trip to Mexico he got to play in the streets with family and neighbors, it was great for him to practice his español while kicking it!

Hello there! This is my first visit to your blog! We are a group
of volunteers and starting a new project in a community in the same niche.
Your blog provided us useful information to work on. You have done
a marvellous job!

Fantastic site you have here but I was curious about if you knew of any user discussion forums
that cover the same topics discussed in this article?
I’d really love to be a part of online community where I can get advice from other knowledgeable individuals that share
the same interest. If you have any suggestions, please let
me know. Thank you!