This is one announcement that has us incredibly excited and hopeful that the mission we’ve all embarked in together to teach Spanish to our children is being taken seriously by those companies we rely on for educational and entertainment resources for them.

We’re thrilled to be PBS KIDS Parent Ambassadors and be able to break the news to you that they just announced more than 25 PBS KIDS games are now available in Spanish. Join the Cat in the Hat, Curious George and Sid the Science Kid for fun games and stickers en español. ¡Qué emoción!

Kids can now play games from their favorite shows in Spanish; the games from each series are grouped into collections that are all linked by a common theme and math curriculum. The collections of games now in Spanish include: 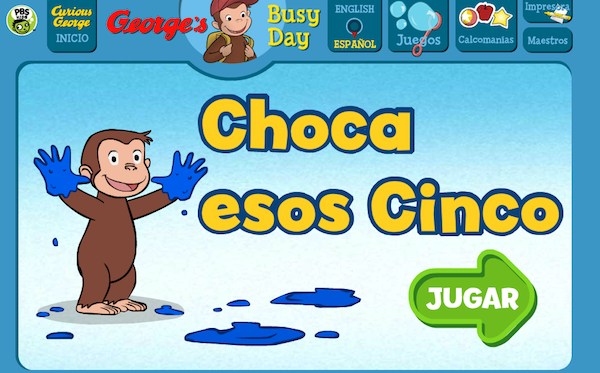 Join George on his very busy day as he learns about numbers and counting and is introduced to addition and subtraction. 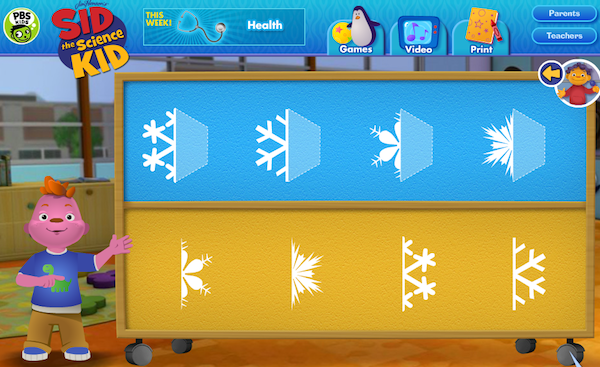 Check out the science fair displays with Sid and his friends, and play games that involve measuring (temperature, weight, and size), sorting, symmetry, addition, and finding patterns. 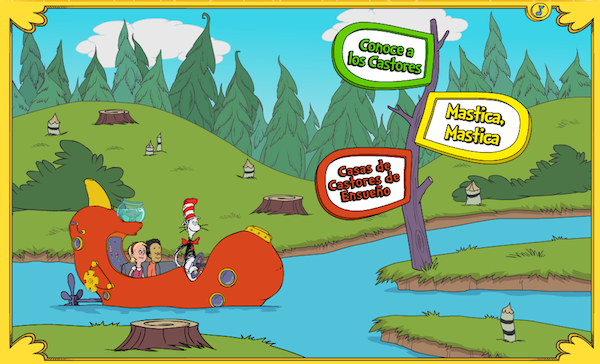 The Cat in the Hat Knows a Lot About That! – Cat’s Math Safari(2 games)

Help the Cat in the Hat collect the missing pages of his Animal Safari Book. You’ll have to use shape recognition and spatial skills, counting and measurement.

The games are all enhanced with researched-based improvements to level selection and instructions. ESL students or children learning Spanish will learn math skills that will benefit them not only at home, but also in the classroom. The games are part of the Ready To Learn Initiative, an early learning project of PBS KIDS and the Corporation for Public Broadcasting (CPB), funded by the U.S. Department of Education to support the development of early math and literacy skills in children ages 2-8, especially those from low-income families.

You can check out all of PBS KIDS online games in Spanish HERE. Additional games in Spanish are also available there, including Spanish language-learning games from web-original series Oh Noah! and Maya and Miguel.

We’d love to know if you and your niños check out the games and share with us which one is their (and your) favorite! Let us know with a comment below or tweet us @SpanglishBaby with the hashtag #bilingualkids.

‘Sofia the First: Ready to be a Princess’ DVD in Spanish {Giveaway}

We liked Trae Algo! I loved that both players were winners.

This is incredible!!! I have been waiting for fun, Spanish games forever!!!

Me encanta! Has anyone been able to watch the PBS shows in Spanish? They are never dubbed for me like some of the Disney Junior shows are.

I am already a subscriber to Spanglish Baby newsletter!

Hello there, just became alert to your blog through Google, and found that it’s really informative. I’m gonna watch out for brussels. I will appreciate if you continue this in future. A lot of people will be benefited from your writing. Cheers!It is perfect time to make some plans for the future and it is time to be happy. I’ve read this post and if I could I desire to suggest you some interesting things or suggestions. Perhaps you can write next articles referring to this article. I want to read more things about it!Nice post. I was checking continuously this blog and I’m impressed! Very helpful information specifically the last part I care for such info a lot. I was seeking this particular info for a long time. Thank you and good luck.hello there and thank you for your info – I have definitely picked up anything new from right here. I did however expertise some technical points using this web site, as I experienced to reload the site many times previous to I could get it to load properly. I had been wondering if your web host is OK? Not that I am complaining, but sluggish loading instances times will sometimes affect your placement in google and can damage your quality score if advertising and marketing with Adwords. Well I’m adding this RSS to my e-mail and can look out for a lot more of your respective interesting content. Make sure you update this again soon..

Santiago is adorable! I’m not surprised that he was super excited when he received his Disney gifts. Everyone loves Disney and this is coming from someone who’s never been!Ms. Latina´s last post ..Wordless Wednesday- Coffee Cup

If you can’t make this dinner but want us to send you an invite to the next one, jump on the list.

hello there and thank you for your info – I have certainly picked up
anything new from right here. I did however expertise some technical points using this web site, since I experienced to
reload the website many times previous to I could get it to load correctly.
I had been wondering if your hosting is OK?
Not that I am complaining, but sluggish loading instances times will
often affect your placement in google and could
damage your high-quality score if advertising and marketing with Adwords.
Well I’m adding this RSS to my e-mail and could look out for a lot
more of your respective interesting content. Ensure that you update this again very soon.

Attractive section of content. I just stumbled upon your weblog
and in accession capital to assert that I
acquire actually enjoyed account your blog posts. Any way
I’ll be subscribing to your augment and even I achievement you access consistently rapidly.

Hello colleagues, how is everything, and what you desire to say concerning this post, in my view its genuinely
remarkable designed for me.

Hi, I do think this is a great website. I stumbledupon it

I may come back yet again since I book marked it.
Money and freedom is the greatest way to change, may
you be rich and continue to help others.

I am truly happy to glance at this webpage posts which contains lots of helpful facts, thanks for providing
such information. Synergy Spanish System Review

This has to be my 2nd favorite post in the week,
i’m not able to’t inform you number 1, it might offend you!