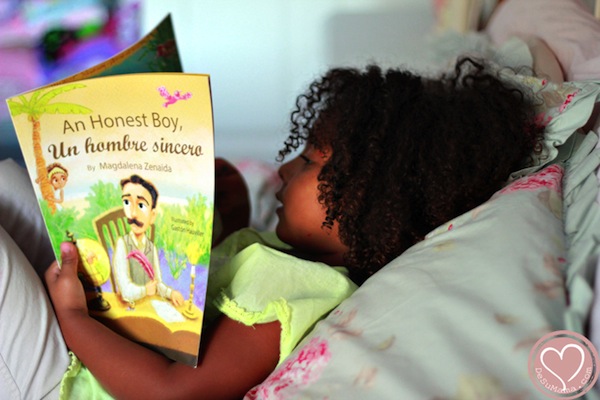 As author of “An Honest Boy, Un hombre sincero” — the only children’s book on the life of Cuban legend José Martí — Magdalena Zenaida evokes a sense of cultural pride by embracing biculturalism. We sat down with her to chat about bilingualism, raising proud, bicultural identities and what José Martí means to her.

How do we interest our children in bilingual literature and why should we?

I think a great way to interest children in bilingual literature is to look at it from the same perspective we do literature in a single language. What I mean is that I prefer introducing language as a function of the story rather than the other way around. Children are drawn to stories more than dictionary-style translations. I think learning a story they love brings a language to life the way memorizing a song does.

For me, I thought it was important to write “an honest boy, un hombre sincero” with the Spanish poetry interspersed throughout the story with translations of the poetry to follow. This was partly to showcase Martí’s poetry and how it fit into the lyrics of Guantanamera, but also to reflect the way I think a lot of bilingual children interact with language at home.

How do we make language learning and history fun?

I think language and history learning are always at their best when there is a cultural context around the subject and how it relates to the child. One of the great things about Martí was that he recognized how important it was for Latin American, and all children, to have the base of knowledge about ancient Western civilization that was popular at the time, but he saw it as only a starting point. He thought that the internal pride and development that could come from knowing the legends and roots of one’s own land would create greater ways of thinking and connecting with each other. That’s why in this really simple way, I like the idea of talking about Martí, who was a complex political thinker, and connecting him to children who might know about Pitbull’s Guantanamera, or parents who listen to Celia Cruz’s, or grandparents who experienced Martí’s same feelings of exile. It’s a way of connecting.

How does the history of Latin America influence our children’s future across the United States?

This is a complex question with so many answers. I would say that most parents tell me they are interested in teaching their children Spanish because “x” percentage of the country will speak Spanish one day. But I think that really separates language as a skill the way someone would learn a math formula, rather than seeing it as a living language, a part of a growing culture. Latin America is still a place of amazing natural resources and the United States is still, despite its difficulties, a place of professional opportunities. I think Martí was very forward thinking in seeing that these two things were interdependent instead of a one-way relationship, that it wasn’t a producer-consumer relationship even in the early 20th century that would benefit all people. I think the more children are exposed to culture and history of those surrounding them, it breeds a caring about their environment and those further afield and how those things can be integrated.

That’s one of the subject I need to think about with my children – how to teach them history of their heritage Ukraine. There is not to many kids friendly books on history in my language. Thanks for the idea!

You’ve got a good blog here! would you like to produce some invite posts on my website?

Useful info. Fortuitous everyone I stumbled upon your internet site unexpectedly, that i’m surprised the reason why this specific chance did not happened earlier! I actually added this.

Hello, This is a really nice looking site. Are you a website designer or did someone make this lovely design for you?

I do not know if it’s just me or if perhaps everyone else experiencing issues with your site. It appears as though some of the text in your content are running off the screen. Can someone else please comment and let me know if this is happening to them as well? This could be a issue with my web browser because I’ve had this happen before. Cheers

It’s the second time when i’ve seen your site. I can see a lot of hard work has gone in to it. It’s actually wonderful.

Thank you for creating this website so easy to find information. good stuff. Saving this one for later.

Awesome write-up. I am a regular visitor of your site and appreciate you taking the time to maintain the excellent site. I’ll be a frequent visitor for a long time.

I wanted to put you the bit of observation so as to thank you so much again for all the stunning opinions you’ve featured on this site. It has been certainly wonderfully open-handed with you to make unhampered precisely what a few people might have sold for an ebook to get some profit for their own end, mostly seeing that you might have done it if you desired. The concepts likewise served to provide a fantastic way to fully grasp the rest have the same keenness just as mine to know good deal more in regard to this issue. I’m sure there are some more pleasant times up front for many who view your blog post.

Pretty section of content. I just stumbled upon your websiteand in accession capital to assert that I acquire in fact enjoyed account your blogposts. Any way I will be subscribing to youraugment and even I achievement you access consistently fast.