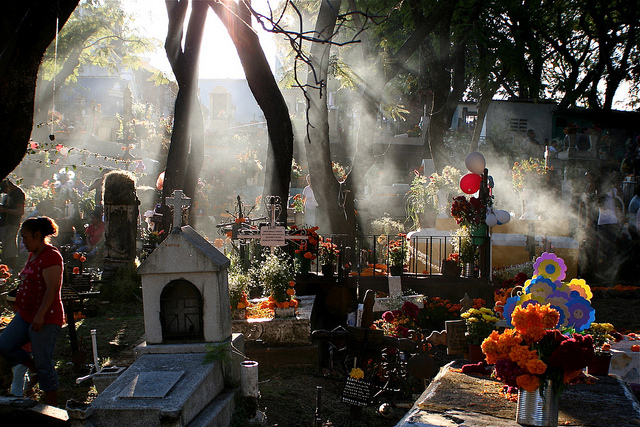 Her obsession with all things death began when my grandmother passed away last year. My then 3-year-old daughter Kalila had grown fond of Mamá Leonor, and I never really considered not taking her with us to the funeral. Just the year before, she had sat on my lap at my grandfather’s funeral, although I’m sure she didn’t remember. There were other small children there, too, and I had always grown up believing that children were just as much a part of this ritual as anyone else. Children always went where the adults did – to church, to weddings, to funerals.

Maybe she had expected to see Mamá Leonor alive, because when she finally saw her, lying so still and serene, she became quiet and concerned. After a while she summoned the courage to ask, “Is she sick?”

Death is something Latinos celebrate every year during Día de los Muertos. It isn’t something to fear – it’s colorful, playful, it’s a part of the celebration of life. In past years I’ve made altars and mini-shrines; I have a beautiful statuette of La Catrina in our living room; and my little girl has colored countless calacas and calaveras on coloring pages. But at that moment in the funeral home, when I was confronted with explaining what it all really meant to my own daughter, I felt awash in doubt, and I thought to myself, what have I done?

But it was too late to change course now. I answered my daughter’s question: yes, she was very sick and she died after a long and good life, and she went on to heaven to be with Papá Orlando. That seemed like an appropriate response, and she seemed okay with that answer. When we got to the cemetery – a dry plot of ranch land broken up by caliche roads and dotted with oversized gravestones and brightly colored artificial wreaths and bouquets – Kalila turned to my husband and me and asked, “Is this heaven?”

It was searing under the hot South Texas sun, and the warm breeze was kicking up dirt all over the cemetery.

“God, I hope not,” my husband blurted out.

It was then that I realized my simple explanations were going to be no match for a 3-year-old’s curiosity. Despite having mourned the loss of my father and three grandparents in the past five years, I had not really thought much about the meaning of death beyond my own grieving. But mostly, I had never had to explain it to a child.

For Kalila, Mamá Leonor’s funeral was the start of many questions to come over the next weeks and months.

Just a few days after we got home, Kalila told us, randomly, that Mamá Leonor had become a statue. That’s what happens when you die, she said. I started to explain otherwise, but she seemed set on this theory, so I just let it be.

Later, we dealt with a sickness, just a cold, but it came along with questions about whether that was going to lead to death, too.

Then one day she heard the words “children” and “dead” on the news over the radio, and she asked again and again why the kids had died. There was such sadness in her voice. I explained that we all die, eventually, and yes, sometimes children die, too.

Even subtle mentions of death in children’s movies or books have stirred up questions from her. What happened to Lilo’s (Lilo & Stitch) parents? Why did they die? And at the end of Charlotte’s Web, Charlotte the spider dies, but not before explaining to a grief-stricken Wilbur, “After all, what’s a life, anyway? We’re born, we live a little while, we die.” When I read that to her, Kalila shook her head in agreement as if to say, I get it.

I’m still not sure what she really gets, though. But she seems at peace with her own ideas about death, and I know it isn’t something that consumes her. Dying is part of life and it’s only a matter of time before we have to talk to our children about it. And after talking about the issue so much over the past year, I feel at peace with my decision to take her to my grandmother’s funeral. I’m glad I trusted my instinct. I think we’re finally ready to celebrate Día de los Muertos together as a family, and I plan on making mini-matchbox shrines for our loved ones this year, and of course, sharing that here on SpanglishBaby in the next few weeks.

Can a Dual Immersion Teacher Instill a Love for Being Bilingual?

What’s In A Name? So Many Choices, Only One Winner
Talking to Our Kids About Day of the Dead/Día de Muertos
Introducing Your Bilingual Children to New Cultural Traditions like Día de Muertos
5 Comments

What a beautiful post, Cynthia – so heart wrenching and wonderfully written. My daughter is three years old now, and I see much of the same curiosity as your Kalila expresses. Thanks so much for sharing.

Vanessa, I think the funeral definitely sped up her curiosity and opened up a box full of questions, but she showed that she was scared, which is what I was afraid of. Maybe it’s because she has soooo many ‘Why?’ questions about everything else that she doesn’t have time to really ponder just this

Ah, mean to say: “but she NEVER showed that she was scared”

Ok so I am thinking about removing my site from Tumbler and get it to a WordPress blog. I believe this is a wordpress blog right? If it is, may I ask where you got the theme? Thanks a bunch!