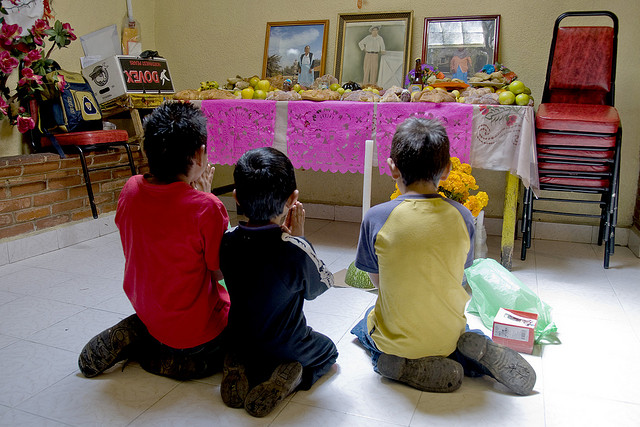 For years now we’ve been talking about and celebrating the Day of the Dead festivities on SpanglishBaby, but this is the first year I’m finally going all out with Camila since I feel she can now get a better grasp of what it means. My plan is for us to put an altar together for the bisabuelos and bisabuela she never met. We’re also invited to a party this Saturday where all families have been asked to dress up as a comparsa, meaning we’ll all have a costume under one same theme.

We thought it would be so fun to get our faces painted as Día de Muertos calaveras and dress up as mariachis! I wasn’t sure how Camila would react to that since it wasn’t her typical princess theme. I told her one night and she immediately said no way. I responded: “¡Va ser divertido! Vamos a celebrar el Día de Muertos como en el libro de Rosita y Conchita que te gusta tanto.”

And that’s where I messed up.

She didn’t know what to say because, yes, she loves that book, but I had used the word “Muertos.” We put her to bed and all was beautiful, until she started getting up. Her pajama itched, she was thirsty, she couldn’t sleep. ¡Miles de excusas! Or so I thought.

The next morning she woke up and finally admitted that she couldn’t sleep because she thought that “todos vamos a estar muertos.” Just like the character of Rosita está muerta in the beautiful book.

And that’s when I realized I had messed up!

As much as she adores the book and she can embrace the traditions and colors behind Día de Muertos, we hadn’t done a great job at explaining to her more about the concept of death. She’s only five, you know?

So this year, teaching my daughter about one of the most beautiful cultural celebrations from part of her heritage, has also opened up a conversation about life and death, but even more than that, her own inner exploration of it. Which is fine. It’s an important one to explore without fear.

We will for sure put up an altar this year and attend as many festivities as we can so that we can transform that fear into an embrace of the inevitable. For some parents it’s too much to talk to their kids about deep life concepts, but I truly believe that when a child is asking or expressing the need to know, then they are ready.

I’d love to know if you’ve had any similar stories and how you dealt with it. Please share in the comments below.

And while we’re on the topic, I’ve written an article on my Babble Voices blog on how to teach our children about the symbolisms and objects that make the Day of the Dead celebration so special that you should check out.

Week in Links for #BilingualKids — Oct. 12

I feel you. This is my first year celebrating Die De Los Muertos. Last night when my (almost five-year-old) daughter was sleeping I started getting pictures ready to put in frames we bought yesterday. I was so glad I did that when she was asleep because I couldn’t help to cry as I looked at my little brothers picture. And then, I couldn’t stop thinking holy bananas how am I going to explain the loss of her grandmother’s baby, my baby brother. How will she react to that? She knows about the death of her other Grandmother, but I’ve never told her about My baby brother Giancarlo. So I cried. Makes me want to cry right now. Long story short, by the end of the night I was glad and proud that I am doing this because its easy to forget to celebrate the life of a person you love when all you want to do is forget about how much it hurts to have lost that person. I don’t want to forget him and only mourn his death but also celebrate his life. I am a little nervous but glad about starting this historical tradition and passing it on to my children.

Thanks for sharing this with us Stephanie. I can’t imagine how difficult it is and will be for you, but it does sound great to be able to celebrate someone’s life despite the loss.
I love this celebration because it helps us approach a topic we don’t even want to mention in a way that’s loving and respectful…and even fun.
Let us know how it goes.

Día de Muertos allows us to deal with a difficult topic in a lighthearted way. Writing “calaveras” (short poems), eating delicious food like “Dulce de calabaza,” and decorating your house with “calacas” will make the kids enjoy, as Ana says, one of the best traditions in Latin America. If you want to read some “calaveras,” and see Dr. Mata and his friends check out http://www.heritagelanguage.com/collection/day-dead-figurines

This is a holiday that illustrates Mexico, a treasure, a cultural palimpsest in which the indigenous roots are as alive and relevant as the Christian European influence that came to Mexico from Spain during the age of exploration. It is imperative to make students want to learn another language to ensure interest, and a hunger for learning! One key way is to make students fall in love with the culture that speaks and use the target language, in our case Spanish. The Days of the dead (El dia de muertos) is one prime example. This is a most creative way to bring into the classroom the traditions from another culture. Make an altar in class, make china paper decorations, write poems to the departed, decorate altars with bright colored flowers (cempasuchitl), sugar skulls or calaveras, and bake bread shaped like bones. Learn more with only the best resources about the Day of the Dead and Halloween,
http://edsitement.neh.gov/feature/origins-halloween-and-day-dead

You like what you see? Visit our entire site, there is an abundance of Spanish or bilingual resources, like this feature on the best Hispanic Poets! (Available in Spanish and English):
http://edsitement.neh.gov/feature/seis-gigantes-de-la-literatura-hispana

Hi Ana, I wrote a post about my experience that I thought you might be interested in reading.
http://www.spanglishspoon.com/4/post/2012/11/explaining-dia-de-los-muertos-to-my-kiddo.html
By the way…Thank you for being such an inspiration to me and so many Latina Moms

I truly am grateful for your contribution to this community.