Your Child Wants to Be Bilingual! 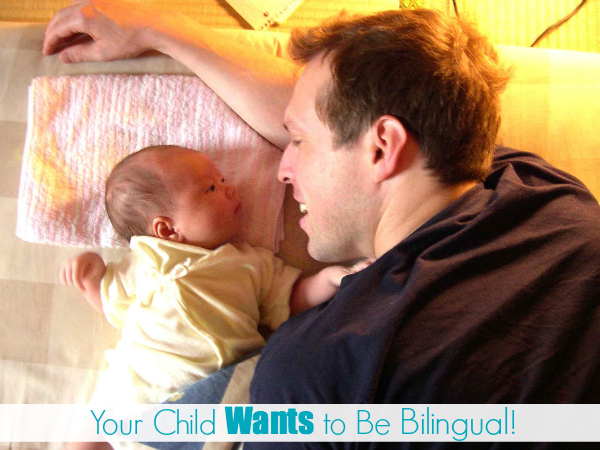 Imagine we could survey every bilingual adult in the world and ask them two questions.

Question #1: Do you regret becoming bilingual?

What do you think the response would be?

Of course, it wouldn’t be unusual for people to mention how hard it was, at times, during childhood: keeping up with two languages, perhaps with twice the homework; suffering episodes of embarrassment when speaking the minority language in public; and enduring other difficulties. A few of the respondents, it’s true, might even answer, “Yes, I regret it. It was just too much trouble.”

But my guess is that the percentage of people responding “No, I don’t regret becoming bilingual” would be very, very high. Despite those struggles of childhood, I bet it would be well over 99%.

Question #2: If you hadn’t become bilingual, is it something you would have regretted?

If we then turned the question around and asked people to imagine how they would feel if they hadn’t become bilingual, what sort of response would you expect? Though there might be a handful who express no regret, wouldn’t most people feel just the opposite? Wouldn’t most people, over 99% once again, express real regret at not becoming bilingual?

Here’s my point: Your gurgling baby, or your growing child, may not be aware of this yet, but they want to be bilingual! And they will regret it if they don’t become bilingual! That’s the truth, and you have to keep that fact in mind throughout your bilingual journey together.

It’s particularly important to remember this during those tougher times, like when your child seems to rebel and refuses to speak the minority language with you. When these difficulties arise, it’s natural to feel discouraged, but you can’t let yourself get trapped in that moment. You have to think bigger than the resistance at hand.

Tell yourself: “Yes, my child, I know it’s hard sometimes. But I also know that deep down, in the adult that lies within you, you really do want to be bilingual and you would regret it one day if you weren’t. So I will continue to support the development of your minority language with all the patience and persistence and perseverance that this tired old parent can manage.”

And you go on. And you do the best you can, day after day, while you have the chance. Because, finally, you know you’re not the only one who wants your child to be bilingual.

Your child wants to be bilingual, too.

Adam Beck is the blogger of Bilingual Monkeys, the home of “ideas and inspiration for raising bilingual kids (without going bananas).” Based in Hiroshima, Japan, he is a former teacher at Hiroshima International School and now a writer for the Hiroshima Peace Media Center. Adam is the father of two children who are bilingual in English and Japanese. You can also find Adam on Twitter and Facebook.

Cute article! Before deciding to put my now 3rd grader into a language immersion school, I asked around to everyone I knew, both bilingual and monolingual. Every single person who was bilingual stated it enhanced their lives in various ways, and everyone who was monolingual stated it would benefit them greatly to have been bilingual!

My survery was 100%! It only confirmed my passion for giving my daughter the gift of language. Even at the age of only 8, she expresses appreciation for being able to communicate in more than one language.

Howdy! This blog post couldn’t be written any better! Looking at
this article reminds me of my previous roommate! He continually kept talking about this.

I’ll forward this post to him. Pretty sure he’s going
to have a very good read. I appreciate you for sharing!

You can adopt their styles to suit yours; this is one of the best ways to determine the right
fashion for you. The world is really shrinking and ideas are being shared around the globe at a rapid
pace. Wearing an elegant UGG boot with tight jeans can give you a classy and beautiful
look.

After his death, the business was successfully carried on by his three
sons. The Unitron website includes detailed description of the features
and benefits from this product. Moccasin UGG slippers are quite
popular among the men.