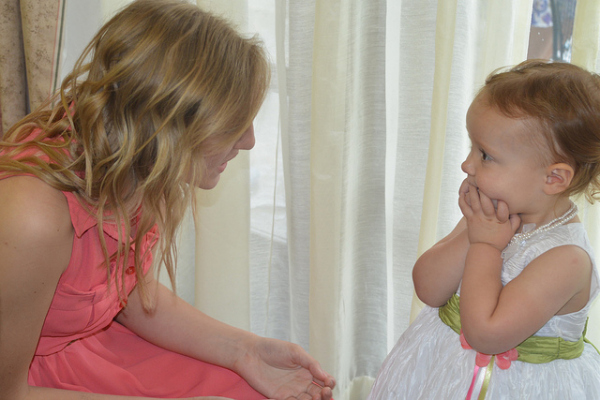 Some parents stop speaking to their children in their second language when the child seems “confused” because they use both languages simultaneously. The fact of the matter is that this is the way languages evolve when they come into contact. In fact, I have been meaning to record my 3-year-old’s colorful use of two languages.

Just the other day she said, “Rafa (her older cousin), do you want to comer?” Another example is when she was asking me to buy her a ball and she said, “Mami, necesito ese (pointing to coins on counter) money para comprar una pelota.” Adults do it, too! The other day my very bilingual husband created a new word spontaneously when speaking to our daughter (Hija in Spanish):

Hubby: Aaah, what am I saying? I know that word. Por favor no saltes, mi’jita.

Translanguaging is the use of multiple languages simultaneously to communicate. That is to say, translanguaging is a form of flexible bilingualism. In our home we speak nearly 100% of the time in Spanish to our daughter, although we use Spanish and English all the time between my husband and I. Bilingual exchanges are a very natural occurrence in our home state of Texas. In fact, the closer you get to the Mexico/U.S border the more prevalent the use of Spanish & English becomes in communicating with others.

My intent in sharing the way we communicate in our home is to provide readers a glimpse of what raising a bilingual child is like in an environment where languages aren’t strictly separated. It does not fall under the One parent, One Language (OPOL) method, nor does it fall under the Minority Language @ Home (ML@H) method. I am not quite sure our method has a name…. yet!

As I continue to help my daughter develop her bilingualism (and eventually trilingualism), I intend on proposing a name to the method we are using in raising her with multiple languages. I whole-heartedly believe that we don’t need to keep the use of Spanish and English because in the real world, languages, just like people, will meet and influence the very fabric of our existence.

Please share your thoughts! Especially if you think of a name to this “language contact” method I am using to raise my daughter with multiple languages. As I write this, I realize that maybe that’s the name I have been looking for: Language Contact Method (LCM).

A “Real” Peek Into My Dual Language Classroom

Languaging is a term coined in socio cultural theory (I believe Professor M. Swain was one of the first ones to use it) to refer to L2 learner’s utterances. I think in your case it would make more sense to talk about code-switching and instances of bilingual paraphrasing. Lovely examples to illustrate real communication among members of a bilingual household

I totally agree with Ana Flores. My goal is to teach my kids not to rely on code-switching to form full sentences.

It is cute when they are young, but then they may get use to it

Thing is Veronica there are many, many ways to code-switch AND yes using it as a crutch is only one of them. Zentella found that most of the time bilinguals do not CS as a crutch. They use it for other reasons like to better express an emotion.

Its a term borrowed from Cen Williams. Also, I am referring to translanguaging as used by Ofelia Garcia and her work as:

“For us, translanguaging are multiple discursive practices in which bilinguals engage in order to make sense of their bilingual worlds. TL’ing therefore goes beyond what has been termed CS’ing, although it includes it, as well as other kinds of bilingual use and bilingual contact.” p.45

So, it includes code-switching. I think the hardest thing to convince people is that mixing is OKAY. In fact, “truly” (as many of you know) bilingual people are the ones that do it best. LASTLY, a critique on the way people use language is (in my opinion) more of a critique about the people who speak it. One more thing, kids/people/me learn how to use which vernacular and with whom. I hope my nena learns to use camion, truck, y troca besides, in my opinion, she also has more words in her vocabulary instead of one or two—catch my drift???

It does sound a lot like the way my girl talks right now! I’ve always thought that once she had a better grasp of both languages completely, then she’d be better capable of sorting them out and not relying on code-switching to form full sentences.
For now, it’s cute, but still makes it difficult for most people to understand her and keep up with her back and forth!

I agree in that other people have a hard time following her sometimes. They should learn how to code-switch

FYI. The following website from CUNY – The City University of New York, (http://www.nysieb.ws.gc.cuny.edu/publicationsresources/) discusses translanguaging in depth. The first resource on the page is a guide for teachers (http://www.nysieb.ws.gc.cuny.edu/files/2013/03/Translanguaging-Guide-March-2013.pdf) and if you scroll down further, there are several video links to Professor Ofelia Garcia’s talk on translanguaging in addition to many related links to emergent bilingualism.

Such an incredible site! Recently found it myself.

Leslie,
Mil gracias! I was reviewing the links you posted and this one the very first page stood out to me as making so much more sense in explaining the way my husband, son and I communicate amongst ourselves and our bilingual friends and family:
The notion of code-switching assumes that the two languages of bilinguals are two separate monolingual codes that could be used without reference to each other. Instead, translanguaging posits that bilinguals have one linguistic repertoire from which they select features strategically to communicate effectively. (Garcia http://www.nysieb.ws.gc.cuny.edu/files/2013/03/Translanguaging-Guide-March-2013.pdf)
I had never heard of the term translanguaging before and always assumed that codeswitching was the only way of describing the phenomenon. I think I need to share this with my son’s teachers!

Dear Suzanne,
I read your posting with great interest and I wanted to share the experiences I went through with my daughter. She is six years old right now and I am very proud to say that she speaks three languages fluently!
I have met many parents who have found it extremely difficult to fight the language of the environment they are in. It is very likely that children may end up with great listening skills for a second or third language, but without the speaking abilities. And this is where I would say: “Don’t give up!”
It took me about a whole year to get my daughter to switch from “Yes” to “Si.” In fact, I went a step further by making her say the exact same sentence in two languages. At the end, she was so tired of it that she ended up speaking to me entirely in Spanish… mission accomplished!
But I must say that it doesn’t end there. As her speech and vocabulary gets more sophisticated, I have noticed that she uses English grammar for Spanish and vice-versa. A great example of that: “Quiero ir a la abuela’s casa”. My instincts tell me that it will take another year or two for her to have a full command of all languages, but needless to say that it’s all worth it!

Please feel free to send me any questions… I can share more tips with you.
By the way, I am embarking on a publishing “adventure” to get my daughter the right books to read in those three languages that she speaks: English, Spanish and Chinese.

Thank you, Heajun! I will definitely take you up as a resource in this long journey of teaching my kids multiple languages.

I appreciate this blog’s comments with references and links. I studied SLA and don’t recall “translanguaging” either, but code switching.

One of my professors just posted something about translanguaging on her FB page and it intrigued me, as I had never heard the term during my studies in applied linguistics almost 10 years ago.
I am a true bilingual who grew up in Greece with an English-speaking mother and a Greek-speaking father. They spoke Greek to each other, as it was the only language my dad spoke, but Mom translanguaged (is that a valid verb?) a lot, since her Greek was weak.
As a preschooler, my mixed-language utterances entertained my family and freaked others out — Mom was often warned that she should stop speaking English to me, as I would grow up a very confused individual (well, maybe they were right… ha!). One utterance that my dad liked to recount after I’d grown up, was the way I referred to money: I called it “money-yiayia”, because the 1000-drachma bill had a woman from the 1800s wearing a scarf on her head, like many “grandmas” did when I was little. Throughout my younger years, however, I remember being absolutely clear about which language “went” with which people in my environment, and by the time I went to 1st grade, I stopped mixing my languages incorrectly.
I am now married to a native Albanian speaker and we are trying to teach our 10-month-old son all three languages. Of course, we’ve gotten a lot of advice against using all three languages, or at least that each speaker should stick to their native language only; but that’s impossible for me since I TL between English and Greek all the time, and my husband between Albanian and Greek, and we are living in the US! So… we just go with our instincts. As far as comprehension goes, our son doesn’t seem to be getting confused at all. And though I know that when he starts producing, he will create his own words/terms and probably mix grammar and syntax structures, I am also confident that he will sort it all out by the time he goes to school — just like I did!!

We are a gaggle of volunteers and starting a new scheme in our community.

AIPAC and the rest of the traitors will get their day in court, eventually.

Hmm i hope you dont get offended with this question, but how much does a site like yours earn?

Hello, I wish for to subscribe for this web site to get most up-to-date updates, thus where can ido it please help out. Anmäl detta inlägg

Excellent article! We are linking to this great article on our site.
Keep up the good writing.