The Unexpected Benefits of Bilingualism 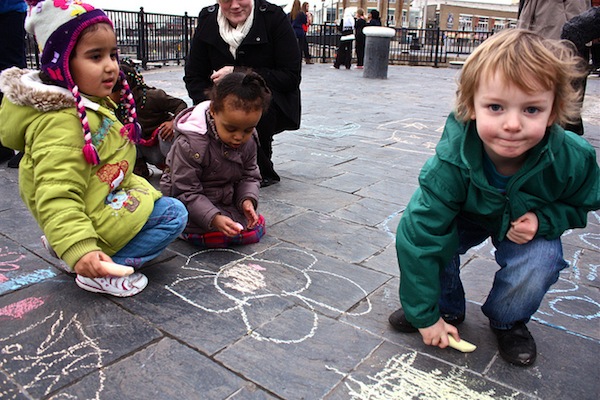 In Costa Rica, I was always known as gringa or macha (Costa Rican speak for blonde), and my very American-sounding name was mangled every which way when I was growing up. Then I moved to the U.S., and my name was suddenly easily pronounceable, and blending in was much, much easier. I loved it. I don’t like drawing attention to myself — I can be shy, I’m not a natural-born storyteller at all, and although as an interpreter I often have to stand up and speak in front of large groups of people, I’m speaking someone else’s words for them and that somehow quiets my nerves considerably.

Early on, in fact, one of the most difficult things for me about raising my sons bilingual was that I was constantly calling attention to myself. Whether I was chatting with my boys at our table at a restaurant or yelling for them across the park, I was out there every day speaking to them in Spanish, and that sometimes made people stop and stare. It made me hugely self-conscious at first — it was less a matter of caring what people thought and more a matter of simply being uncomfortable with the attention. So I put my blinders on and ignored it all.

Slowly, though, I’ve started to embrace it. I can’t actually remember an instance of anyone reacting negatively to our speaking Spanish when we’re out and about. People are generally nice, and interested in hearing more about bilingualism. Older Latina women, especially, are often really tickled when they realize that my two towheaded boys speak Spanish. I’ve even met several Costa Ricans in my neighborhood. In every case, they’ve approached me after hearing me speak to my boys — they’ve pegged me as a fellow Tica from my accent. Whereas once I might have kept quiet, now I often start conversations with people if I can tell they speak Spanish.

I even unintentionally started dressing my boys for the part. A couple of years ago, they each received a red- and yellow-striped soccer jersey from their uncle, lest they forget which soccer team to root for. I immediately decided that with the bright colors, they would make perfect airport shirts, and now I often have them wear them any time we’re out where there will be a big crowd. We’ve struck up conversations with immigration officials. Security guards. Two British Airways pilots. A Costa Rican gentleman in Miami who wanted a picture so he could post it to Facebook and show his nephew. A guy on the Metro who was from Arizona and knew a whole lot about Mexican soccer teams.

And so on. I never would have imagined it, but being adamant about bilingualism has brought me out of my shell. And it’s been an unexpected, wonderful side benefit.

Week in Links for #BilingualKids — Feb. 22

I enjoyed reading your story. My mother is from Panama but she didn’t teach myself or siblings Spanish. I wonder if it was because maybe she felt the same way you did about drawing attention to herself when speaking. By all accounts, she looks like any other black woman and one wouldn’t think otherwise until she speaks. She still has a very noticeable accent. I, however, have taken it upon myself to learn the language and culture. I’ve told myself that if and when I have kids, I will teach them Spanish so that this is something that they can pass on through the family. Thank you for a good read! – William, Jax, FL

I’m white, and while I’m not shy I don’t like to be the center of attention. Now that my son is 5 I do worry whether he wants to be the center of attention. Also, I’ve only had a few negative experiences but my husband, who is not white, has had many. The points raised by the commenter above are really important, and a central part of the challenge of raising bilingual children in the racist and xenophobic u.s.

I’m so glad I read your article. I always thought I was the only one that felt this way. I was raised here , but as first generation, Spanish was the only language we spoke at home. Now, raising a second generation of Latinas, speaking the language is harder, but I speak it to them as much and everywhere I can. I’ve become a proud Latina and the “stares” don’t bother me anymore.
GRACIAS!!!