New Year’s Resolution: We Will Speak More Spanish at Home 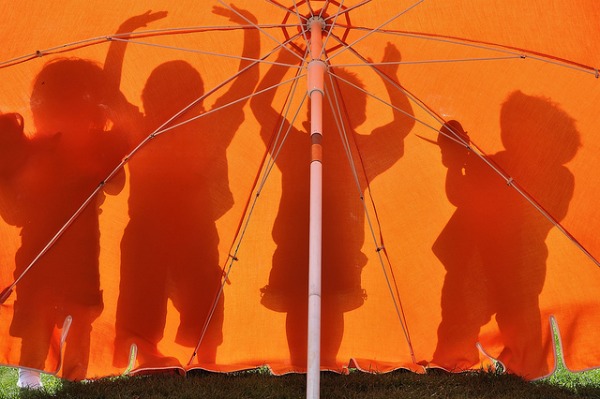 I began to learn Spanish a bit in grade school, and then in high school began the typical Spanish classes an hour a day. When I was a freshman, I traveled abroad for the first time to Peru with my dad to bring home my newly adopted brother and sister. This trip changed my life in uncountable ways: experiencing and living the language in bustling Lima and magical Cuzco cemented my love of Spanish and Latin culture.

In college, I changed my major to Spanish in part so that I could study abroad — not once, but twice (Spain and Ecuador). Most of my friends were Spanish-speaking, and I became very fluent. At the same time, I met my future husband — an exchange student from Mexico. I became a Spanish and ESL high school teacher, and we traveled frequently within Mexico, Puerto Rico, Costa Rica, Spain.

Evaluating my education and experiences, it would seem that raising bilingual kids would be a piece of cake. I am a huge advocate for multilingualism; I have multiple degrees in second language teaching and education; my Spanish is as near-native as it can be; I have many friends raising bilingual children; half of our family lives in Mexico and communicate almost exclusively in Spanish; plus, I love Spanish.

And yet… I still struggle. My kids answer me in English. And (voice dropping to a whisper) there are days that are so hectic and distracting that I admit I speak more English than Spanish. Much more. With my husband working long hours, using the OPOL (one parent one language) method cannot work for our family.

I have tried to step back and analyze what it is that inhibits me from communicating solely in Spanish. I enviously observe several successful friends in my exact situation who do an amazing job of maintaining a monolingual (Spanish) home environment, and I wonder why I am different?

The only answer I can provide is that as our family has grown and taken on more activities, and a fuller schedule, I have very slowly gotten out of the habit of sticking to Spanish. This is the first challenge: when I am in a hurry, or trying to do 10 things at once, or disciplining… what naturally comes out of my mouth is English.

My second challenge has to do with my own feelings of ineptness. When they were babies, I would play, and sing, and read to my kids in Spanish— but in the presence of anyone that spoke English I would switch. As our lives became more “social,” I found myself speaking more and more English. I then became hesitant to speak Spanish with the kids in front of anyone Latino. No one has ever said anything to me, but I have this tiny worry that I may use the wrong grammar or pronounce something wrong, or forget a word and have to mutter in Spanglish… I guess I worry that people will judge me?

With chagrin, dismay and deep-rooted guilt, I am admitting that I have put my own anxiety in front of my children’s need to hear more spoken Spanish.

The reason for this confession is to soundly proclaim (if only to myself) my New Year’s resolution. I am determined to turn a corner in our language journey, and adhere to a Spanish-majority home environment. My goal for 2013 is to help my 4 children develop oral proficiency by being a proper role model. How can I ask them to speak Spanish, when I am modeling English? Henry Ford once said “Whether you think you can, or you think you can’t — you’re right.” I think I can — I know I can — and I will do my best to speak Spanish with my kids this year. This is going to be the year that I transform our family language system from OPOL (one parent one language) to mL@H (minority language at home).  Who’s with me?

Another Advantage for #BilingualKids? Sharper Brains

Why It’s Imperative to Me That My Kids Speak Spanish
5 Ways to Bring the Target Language Home
Is It Rude to Speak Spanish in Front of Those Who Don’t Understand?
6 Comments

I could have written this! I know exactly how you’re feeling, Becky. It takes a lot of mental energy to communicate in your nonnative language, and we all resort to comfort more often than not. My family has unintentionally switched from ML@H to OPOL (since my son’s father and I divorced), and although I have the reassurance that he’s getting tons of Spanish at his other home, I still feel terrible about how little we converse in Spanish at my house now.

Thanks for giving me a great resolution idea. Best of luck with yours!

Thank you Chelsea!:) Sometimes I need an “official start date” in order to re-energize. I’m thinking that on the first of every month I will have a mini-New Years (or new month?) and evaluate what is working and what isn’t, and maybe what to focus on. Thank you for the supportive words and good luck in 2013!

I encounter the same issues, and I have the same resolution to speak more Spanish at home. I teach Spanish and have studied extensively about learning a second language, but it is not my native language, so it’s not easy. My 9 year old speaks to me in Spanish pretty much just when he wants something…haha. My 3 year old speaks a (mostly English) Spanglish. I am the only one who they hear Spanish from on a regular basis; my husband is a native speaker but he chooses to speak only in English, as does his mother (she claims my son doesn’t listen to her when she speaks in Spanish, which isn’t really true.). We travel to Mexico to see my in-laws about once a year, and plan on sending my son there in the near future to improve his Spanish.

I wish you luck on your resolution!

Megan- so many similarities! Congratulations on raising your kids to be bilingual. We are also planning a trip to Mexico this summer for some much-needed immersion:). Good luck with your resolution as well!

Great resolution, and good luck to you! When I read your post, I felt as though I will be in the same situation once my boys get older. They are so young now, that it’s very easy for me to speak the language because of basic concepts and vocabulary. My boys are 3 and 1 years old, and we only speak Spanish at home, but I find myself struggling more now with the oldest. For example, this morning we went out for a walk, and he pointed at a fire hydrant, and asked “que es eso mama?” I had no clue. These are the times I wish I had a smart phone so I can quickly look stuff up (I am stuck in the early 2000s and still have a basic phone with only texting capabilities!!) Anyhow, thankfully my husband was there, and he said it was a “Boca de incendio” and that was that. BUT, situations like this are always happening. Which means I need to expand my vocabulary. This is where I think the luxury of the dual immersion comes in – since you know they are being exposed to the language at school you may not have to be so strict with the Spanish at home, but my husband and I are still debating that possibility since our local school district is great we are not sure about sending the little ones to a dual immersion program that is only six years old. Anyhow, didn’t mean to go off on a tangent but my point is that I can relate. There are times that during dinner my husband asks, “Como te fue en el trabajo” and I just repond “te digo mas tarde” because I know that once the boys go to bed, our English time begins. I know that is lazy on my part and I need to practice more, but it’s just so much easier for me to speak in English. However, I realize the importance of Spanish, if I didn’t I wouldn’t have dedicated this much time so far.

Don’t be hard on yourself:)- I completely understand! There are so many times that I am missing vocabulary and would sounds ridiculous substituting every other word in English. I agree- it’s about learning more vocab and (for me) getting in the habit of talking around the word or giving a synonym or definition. When they were babies, I was learning new words like chupón, babero, amamantar, and now I’m trying to learn words about science, sports, or nature. The other day we went on a hike and came home to show my husband our findings. My son announced “Encontré pine needles y sticky sap y berries.” It’s all a work in progress:).