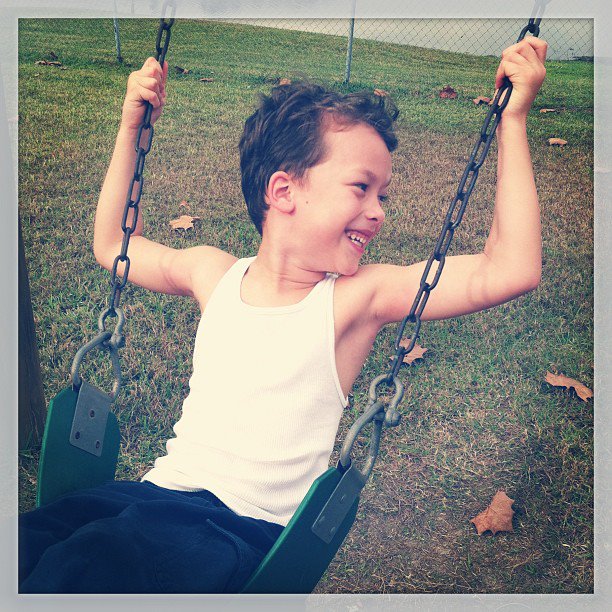 Tomorrow, my son turns 5. It seems like a new milestone, like he’s moving into the big kid phase. He’s tying his shoes and learning to ride a bike without training wheels. Kindergarten is right around the corner, and I’m sure time will continue to whizz by as he discovers elementary school life.

Isaiah’s 5th birthday isn’t just a turning point for him, though. It’s a day for me to pause and reflect on everything I’ve done as a parent in the past five years. He’s my first and (so far) only biological child. He has been my reason to remain bilingual all this time, or at least in a fully functioning manner.

Our bilingual experience hasn’t been without its difficulties. Isaiah has gone through the natural phases of rejecting Spanish or getting frustrated with it, and so have I. He has the added stress of living in two homes, both bilingual but in different ways. Keeping to one method of immersing him in Spanish has not been possible, so we’ve all had to be flexible.

Although it pains me to say it, we speak mostly English in our home now — which was partially Isaiah’s choice. This is a big shift from when Isaiah was born up until he was about 3, when his father and I spoke only Spanish to him. Now, he’s around his older English-dominant stepsisters and speaks English at school. However, I have found that although he doesn’t practice Spanish as much as he probably needs to, this English invasion hasn’t been damaging to his desire to know and use Spanish.

Nearly half of his 27-student preschool class speaks Spanish at home (the advantage of living where we do), all three of his teachers are Latina, and he spends about 40% of his time with his papi and abuelos, who speak exclusively Spanish to him. Every time he hears Spanish in public or reads a bilingual book, he makes a comment about how he understands all of the words, not just half of them. There are certain things he only wants to watch in Spanish, like the movie Robots. He gets excited when he hears other languages, like Arabic and Chinese, and frequently wants me to teach him words in Italian, my rusty third language.

The greatest thing about this age is that Isaiah’s now completely aware of the distinction between languages and can have conversations about it. I no longer feel that I am conducting an experiment by trying to expose him to Spanish without him noticing. He’s consciously participating in the search for elements of his second culture.

As we approach the possibility of sending him to a dual language immersion program next school year, we are trying to boost the amount of positive moments we have in Spanish and about Spanish. I am loving that we can be playful and relaxed about it, since I believe everyone learns better when they aren’t really thinking about it.

I am proud to be raising a bilingual child, but most of all to be living in a comfortably bilingual family. Having the choice to switch from one language to another is what it’s all about at the end of the day, and everyone in my household is exercising that choice differently. Here’s to the new year, and the last five!

Ideas for Last Minute Under $10 Gifts for Reyes Magos

Thank you for sharing your story. It’s great dedication on your part to do this, considering you are not a native speaker and I congratulate you for that. I have many friends who are native Spanish speakers and their children do not speak Spanish. I am a native speaker myself, but struggle with it sometimes and my husband reminds me how important it is to continue to speak Spanish. So far, my son is 3 and it’s great so see him speak Spanish, but I agree it has not been easy. I know that it’s only going to get harder, because his vocabulary will increase and therefore I have to increase my knowledge as well. Good luck to you and bravo for remaining so dedicated!

¡Muchas gracias! I really appreciate the kind words. SpanglishBaby has been a huge source of reassurance for me that there are many means to an end when it comes to our mutual goal of raising bilingual kids.

I feel 5 years is a true milestone in bilingualism because of everything you already discovered. Now is when they truly choose to speak one language or another and when they can be more conscious about their reasons and/or desires.
I´m always in awe of your commitment to speak Spanish to him even though it´s not your native language. You are an amazing mamá!

Thanks, Ana. We all have to push ourselves out of certain comfort zones as parents in order to do what’s best for the kids, and my battle just happens to be taking place in a cultural zone.

I know you can relate since Camila is the same age. It becomes more fun and less work; let’s hope that continues!

Hats off to you Chelsea! You are a great mami

Wow. Where does the time go? That is a big boy in the picture.
My Marco is just one half-step behind your Isaías. I have been trying really really hard for the last four years to speak around 80% Spanish to him myself and very strongly encouraging all the adults who are native speakers (his dad and most all the other adults in his daily life) to speak 100% Spanish with him. Now, suddenly, just within the last three months — none of the other adults have changed anything — but I find myself speaking English to him at least half the time. Like always I start off most every conversation in Spanish and he’s always asked me to switch, but now, I do. Why? Because unlike his previous (English-speaking) daycare, he’s now in preK-4 at a dual-language elementary school where all subjects are in both languages through grade 8. Suddenly, his extremely stubborn resistance to speaking Spanish himself has entirely disappeared and he suddenly understands it is super cool. At the same time, English is the language he shares with me, specially. I didn’t mean for that to be the case, and I’ve learned a number of lullabies in Spanish, but I can’t help that I know dozens more lullabies in my native tongue, and that I want to sing them to him. And I think that’s ok. There are days now, going to real school, that brings out a side of him who just wants Mama (very specifically) sometimes. Marco is very proud of being able to speak Spanish, loves to show off and his Spanish ability is shooting up like a rocket right now. I’m beginning to think it’s all in his attitude. He’s suddenly not resistant at all. It’s as you said, a choice of his, and he chooses Spanish happily whenever and wherever it makes communication easier or more intimate. That, I guess, was the goal, not a certain amount of time Spanish is spoken, but whether he can use it fully. I suppose I will have to be vigilant though to make sure he stays positive and entirely functional as we move up through the years…