Watching in Awe As My Son Becomes Bilingual 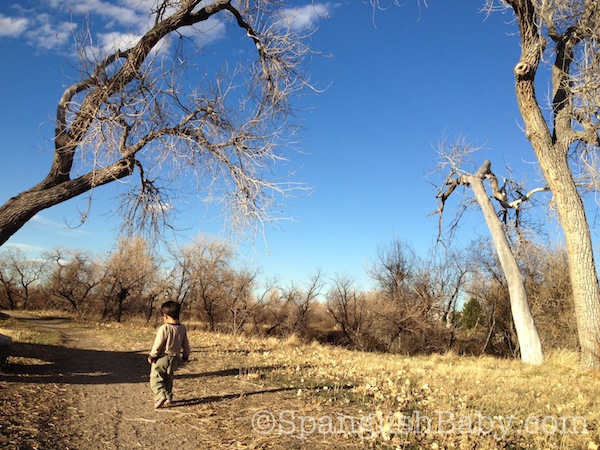 The bell rings and Santiago runs to get the door shrieking with excitement. He’s been waiting all afternoon for friends of ours to come over for dinner so he can play with their 7-year-old son.

“Hi, Liam!” he says and hugs him as soon as I open the door.

“Hi, Santiago!” Liam responds and off they run to play with Vanessa who’s in the playroom in the basement.

A bit later, they all come up to the kitchen where I’m having a conversation with Liam’s mother. All of sudden, I find myself stopping mid-sentence when I hear Santiago speaking English.

“I can’t see,” Santiago says while Liam and Vanessa look at pictures on someone’s iPhone.

While this is obviously no big deal at all considering Santiago is 3 years old, it is a huge deal for me because I’ve never heard my boy say anything in English beyond “hi” and “bye”. Ok, maybe the obligatory “What’s your name?” and “How old are you?”, but that’s only because we practiced them at home before he entered preschool.

I continue observing my son as they move from the iPhone to playing with a cheap yo-yo I just got at the grocery store.

“It’s my turn,” my son protests for a chance to spin the yo-yo.

Although he’s not having full-fledged conversations in English like he has in Spanish, I’m in awe of what’s happening right in front of my very own eyes. Both my husband and I make comments throughout the night about all the new phrases he’s learned in English in preschool.

Having gone through the same process with his younger sister Vanessa, it’s not like I ever thought it wasn’t going to happen, but I’m still amazed. Mostly because he only goes to preschool three times a week, which means he only spends about 15 hours a week immersed in English. And yet, he’s well on his way to becoming bilingual.

I know this not only from interactions like the ones I just described, but also because he understands pretty much everything that is said to him in English. He might not be able to answer in complete sentences just yet, but he doesn’t miss a beat when someone talks to him in English.

I’m sharing this with you today because I’m incredibly proud of my Santiago, but also because I think it serves as proof that learning to speak English is impossible to avoid when you live in this country. In other words, all those parents who worry that using the mL@H method to raise their children bilingual will put them at a disadvantage in English need to remember that English is everywhere… it’s inescapable. The only language we truly have to worry about is Spanish, the minority one.

Bilingual is Better on Al Punto with Jorge Ramos

i love your post, Roxana! I completely agree. it’s Spanish we have to worry about! Kids will always pick up English, and will want to default (rebel) to it later! (i know i did!!)
Thank you for sharing this, because as I worried about what preschool would do to my son, I decided that I would begin by sending him to school part time, twice a week, at about 2.5 … let’s see how that goes! but thank you again for sharing!
love that Spanglish baby is such a great resource!
Diana

Thanks, Diana! It’s just crazy to see how quickly and easily they learn English even when they don’t hear at home, like in my case. I, like other parents, used to worry about how my children would survive in preschool without knowing English, but they figure it out fairly quickly.

Good luck with your son’s preschool and I hope you share how that goes!

I also agree that we have to work more with the Spanish. I have a three year old that speak Spanish and English very well. But my son is only 23 months old and he speak to me in English. He doesn’t care that we use at home Spanish. He does not go to the pre-school but I have a sitter that helps me 6 hours a week and speak English. I am glad that my neighbors at Portland, Or are from Spain and encourage my kids to use Spanish (at least my daughter).

Yes, it’s amazing what even minimal exposure to English will do to their Spanish. I too had a nanny until recently, but one of the requirements that I had when I hired her was that she spoke Spanish, ideally as her first language. I’m convinced that helped a lot to ensure my kids spoke and were surrounded by Spanish most of their waking hours.

Lucky you that your neighbors are Spaniards. Make sure you continue to nature that relationship! Thanks for visiting!

Roxana, the same happens to me. Matías spends all of his time with me and we only speak Spanish. My husband travels quite a bit and the rest of the time we are with my parents who only speak Spanish to him. A few weeks ago I was a the playground with him and without realizing it an hour passed by just listening to him talk in English with other kids and I wasn’t used to it! It sounded strange to me. Even my mother said “es raro oírlo hablar en inglés”. But again, it’s amazing and I just want to shout about how proud I am of him. His bilingual upbringing is completely different to mine, but so far he is proving it is possible to keep the language alive.

I’m so happy to see this post, Roxana! My husband and I are planning on raising our children in Germany (we are both native English speakers), where English will be a minority language, and were planning to use the ML@H method. I was starting to worry that our children would struggle with German when they started preschool, but your post has helped me relax about that. ¡Muchas gracias!