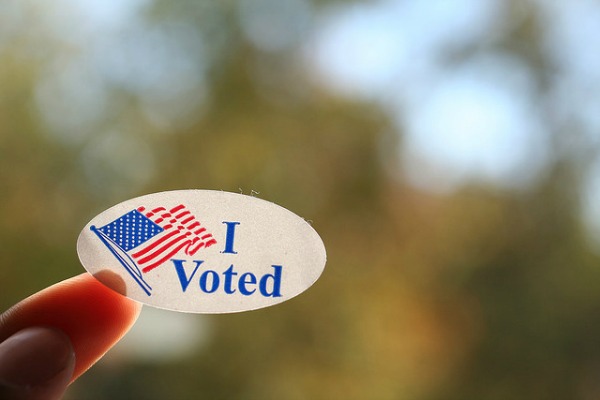 When the pollworker put my ballot into the blue plastic bin, I did a little jump and blurted, “woohoo!,” in a way that was both a little embarrassing and totally appropriate. I was tempted to hug him, but I at least had the self control not to do that. As I walked out of the community center, my skin still covered in goosebumps, the first thing I did was call my mom: “Mami, I just voted and it was so exciting!”‘

You see, while I just celebrated my 33rd birthday, and my 32nd year in the U.S., it was the first time I was eligible to vote in a Presidential election. While my family was lucky enough to immigrate with green cards, I did not become a citizen until 2009. I had tried to naturalize in time for the 2008 elections, but the process in Los Angeles takes so long that I missed that historic election.

Why did it take me so long to even start that process?

I could have naturalized at 18, when I became a legal adult. Or when I was 22 and married a U.S. citizen, but something always prevented me from making the commitment to citizenship, despite being very opinionated about politics and social movements. I could say it was the exorbitant fees: over $500 at the time and several days off work (those costs are even higher now), but while that was a hardship, it wasn’t the biggest obstacle.
As an immigrant, I inherited a sense of nostalgia for my home country, El Salvador.

It was my mother and father who dreamt for decades of returning, and my siblings who flew back for reunions with high school friends, not me. I left El Salvador at 11 months old, so there are no real memories bringing me back to that place. Still, I felt, and sometimes feel, a kinship and a longing for that place, that identity, which is so different from this place, and this identity, my identity.

While I am proud to be Salvadoran, many people are surprised to learn that I am Salvadoran, assuming…I’m not sure what. Whatever it is that others picture when they picture a “Salvadoran,” apparently, it isn’t me. It might be what I must admit is a “valley girl” accent, or my stilted Spanish, or it might be that I grew up in the San Francisco Bay and that is where I was socialized to be the hippy geek that I am today.

For years, I felt ambivalent about becoming a U.S. citizen. The U.S. involvement in the civil war that killed 80,000 Salvadorans and caused my family to flee to the U.S. was something that made the idea of becoming an official “American” a dark prospect, as if I’d be siding with the “bad guy” in the context of El Salvador’s history. For years, I thought of doing a dual citizenship, but the U.S. doesn’t even recognize dual citizenship with El Salvador, so that was out.

Finally, it wasn’t my yearning to have a say in American politics, or even my sense of belonging in the U.S., that forced my hand. It was the birth of my first daughter, an American citizen.

When I got pregnant, I realized that it was insane to stay a legal “alien” with children who were American. What if something awful happened and the U.S. decided to expel immigrants like me? I didn’t want anything to be a barrier between me and my children. So I did what my parents could never bring themselves to do and I naturalized.

It was the right thing, not just for those personal reasons, but because as an educator I am working every day to empower young (and not so young) people — to help them use their voices in pursuit of their goals. I believe in the spirit of community and service.

I will raise my girls to know that they count; therefore, they are obligated to use their voices and their hands and their power for the good of others. It’s my responsibility not only to vote in this country where I have built my life, but to commit myself to this place, as a full citizen and do my best to make it the kind of place I am proud to call home.

Am I still Salvadoran? Por su puesto! But am I American too? Totally.

Congratulations on casting your first vote! Glad it was such an empowering experience.