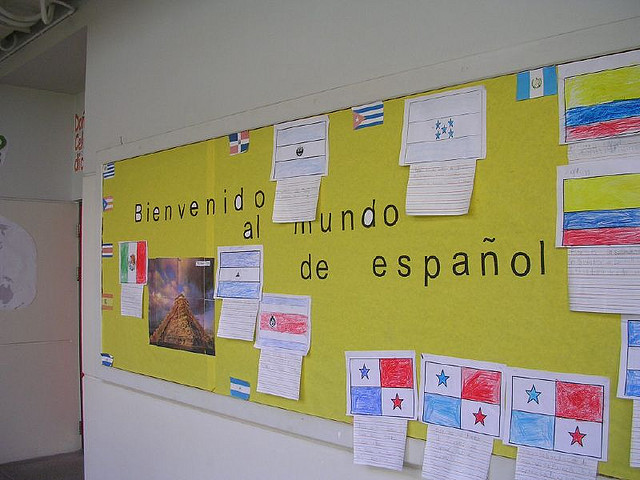 I might just have to move to Illinois. In case you didn’t know, earlier this month, Gov. Pat Quinn, signed a bill, which aspires to strengthen bilingual education in that state. Illinois plans to do that by first evaluating the state of bilingual education in its schools and then presenting a report to lawmakers and state education officials by Jan. 1 with their findings and recommendations.

I’m not going to lie, listening to Gov. Quinn make the following remarks during the ceremony to sign the bill into law made me shriek in excitement:

Understanding that language is really the window to learning another culture. We do not want to be tongue-tied americans, we want to make sure we understand language as much as we can, not only the English language, but the Spanish language.

Can you imagine what school districts nationwide would look like if all the governors thought like him? I mean, what would happen if our nation’s governors realized the benefits behind bilingualism and the importance of getting to know other cultures? Illinois might be taking the lead, but I have to believe that this is only the beginning.

I believe that just like the subtitle of our forthcoming book Bilingual is Better states, we’re experiencing a bilingual parenting revolution and it’s undoubtedly changing the face of this country!

Now, I’m not naive enough to think that any politician who’s willing to say and do something so courageous may not have ulterior motives — such as getting on Latino’s good side in preparation for election day. But I don’t really care one way or the other. That may sound horrible to some, but I’m so convinced every child should have the opportunity that currently only the minority have to attend dual language immersion schools and graduate as bilingual people ready to tackle an even more global world than the one we currently inhabit.

Call me a dreamer, but I’d rather think that this is where the United States is moving towards than the opposite. I know that’s hard to believe considering all the anti-immigrant backlash Latinos have suffered in the last couple of years. But we must not be discouraged because soon enough it’ll be imposible to ignore our strength, value and impact as permanent fixtures in this country’s culture.

If you haven’t seen the video below, I encourage you to watch it. In the meantime, join me in applauding Gov. Pat Quinn, Senator Iris Martinez (D-Chicago) and Representative Linda Chapa Lavia (D-Aurora) who sponsored HB-3819 and the entire state of Illinois – the bill passed unanimously in both chambers – for leading the way and giving bilingualism the importance it deserves!

SpanglishBaby Playground is The Place to Be!

Good news! I keep hoping this country keeps awakening and realizes the value of bilingual education. I always feel so bad for other parents who don’t have access to the amazing education my daughter is getting at her wonderful school. When my daughter is showing her language skills, I so often hear “I sure wish I had that opportunity” or “I sure wish there was a school for our kid like that nearby.” It’s only fair that every child have access to a better education. Here’s hoping!

This is great news! The only thing that needs to be taken into account is the fact that to us, bilingual education is embracing Spanish and exposing our children to the language and connecting them to our culture, but to many areas around the country, such as where I live in New York, bilingual education is not seen in that way. I am a teacher in a predominatley Latino school district, it’s about 65% Latino, and bilingual education is offered not to maintain or expose the children to the language but to accomadate them and set them on a track to assimilation. Eventually they will be taken out of bilingual classes and placed in the mainstream subject classes offered in English once they have mastered English. In many cases from listening to some people, it is seen as a negative thing since they feel students should be submerged into the main subjects in English so they master that language not celebrate their own. It is very interesting to read many of the blogs on this site because there seem to be so may resources in certain parts of the county available to help parents raise their children bilingual to maintain Spanish in the next generation and in the part of the country I live in, that is not how bilingual education is viewed and there aren’t many schools providing Spanish Immersion programs here. I only found two on Long Island which is very sad. As far as politicians only doing things like this to try to get the Latino vote…that is exactly what we want to them to do. We are becoming, if we aren’t already a huge voting block in this country. I teach a Latino studies class in my school district and I teach my students how politically important we are. I loved the TIME Magazine edition titled “Yo Decido? How Latinos will choose the next President of the United States.” This country cannot and will not ignore us because we are a powerful force to be wreckin with on a poltical scale, which is making the government shift to appease us in what we want and need as a community. Definitely an awesome thing!!

I also work in a district in the state of NY that has mixed viewpoints on what bilingual education should look like. In my particular school, the bilingual program used to be dual immersion, but then was changed to transitional, supposedly due to a lack of interest from English dominant families. Now, the program is for native Spanish speakers to help them “transition” into English, with little regard for their continuing the development of their Spanish skills. It’s difficult for me to be a part of a transitional program, knowing that even 1 way immersion is a better alternative, but pressure from state testing convinces many teachers to do less and less in Spanish. What message does it send to the students and their families when each year, the percentage of Spanish instruction decreases? We need to educate EVERYONE not only about the amazing effect of bilingual education, but also which programs are statistically most effective. Dual or one way immersion are not the most cost effective options, but when it comes to producing truly bilingual and bicultural students, they are the best!

Increible, let’s keep up the fight!

While it’s clear the Feds are concerned about language learning, they are hesitant (and rightfully so) about telling local education agencies in individual states what they should do about it. As I’ve said before, for reasons of taxation and state’s rights, education is a very local animal! What’s more, states don’t know there is a need locally until they investigate it, polling major players in the public and private sector. One cost-effective way to do this is to conduct a state language roadmap process. This has already been done in Oregon, Ohio, Texas, Utah, and Rhode Island. Language roadmaps heighten awareness about the importance of quality language education and encourage state legislatures and other local players to step up and do something about it. Disclaimer: I’ve been involved in several of these efforts as a project manager and am currently volunteering time to the Rhode Island effort.

Very nice post. I definitely love this site. Thanks!