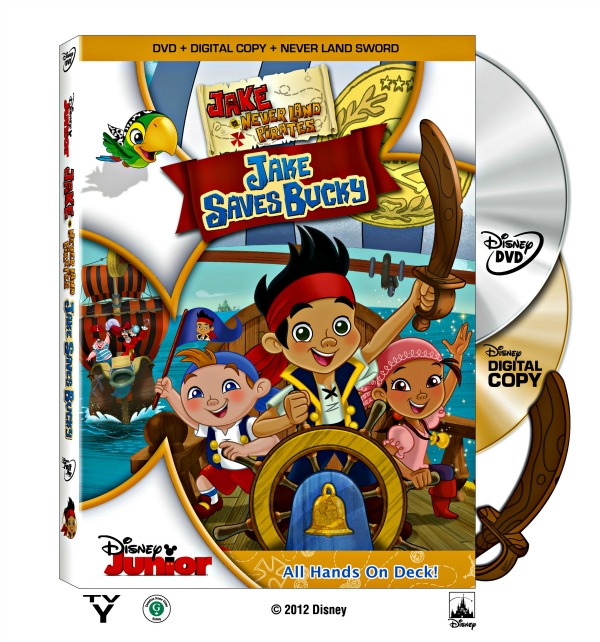 “Peter Pan” is one of my sons’ favorite movies, so it was no surprise that they would also fall in love with Jake and the Never Land Pirates.  They were thrilled to be able to watch a full-length, high-speed adventure on the high seas as Jake and his crew race to save their ship Bucky from the sneaky Captain Hook.

This movie did not disappoint, as there was action, fun, an appearance from Peter Pan, and even a fire-breathing dragon.  Jake and his pirates find themselves in a race to save their ship Bucky from the sneaky Captain Hook and his ship the Jolly Roger.  Unfortunately, Bucky loses the race due to some of the tricks used by Captain Hook, but with the help of Peter Pan, Jake and his crew embark on a journey to save their beloved ship.

My children loved the story and the music, and I loved the Spanish language option, which was available for all of the episodes and the sing-along pirate-oke too.

The “Jake and the Never Land Pirates:  Jake Saves Bucky” DVD contains the movie and four other episodes of the show.  There is also Pirate-oke which allows your children to sing along to featured songs.  To the delight of my sons, there was also a blow-up sword included.  The DVD has both a DVD and digital copy.  This movie is guaranteed to be one that your children will love and want to watch over and over again.

Pirates of the Caribbean Wants You to Go to the Mexican Riviera on a Disney Cruise!
Disney Junior Celebrates Hispanic Heritage Month and We’re Part of It!
Healthy Snacks for A Healthy Weekend
43 Comments

I am already a subscriber

Captain Hook
i am a subscriber.

Jake is probably my kids’ favorite.

Jake is the best, of course.

I love the idea of the pirate-oke

Jake Is A Favorite

Jake Is A Favorite !:) I’m A Subscriber

Jake is our favorite!

We love Skully the best! Thanks so much for hosting this great giveaway!

My nephew loves this show. he loves it so much that he is Jake for Halloween.

Love Cubby! Thanks for the chance to win!

Jake is our favorite!

I am already a subscriber

Jake is our favorite.

Would love this, am email subscriber!

jake is the favorite

Leave a Reply to Daniel M