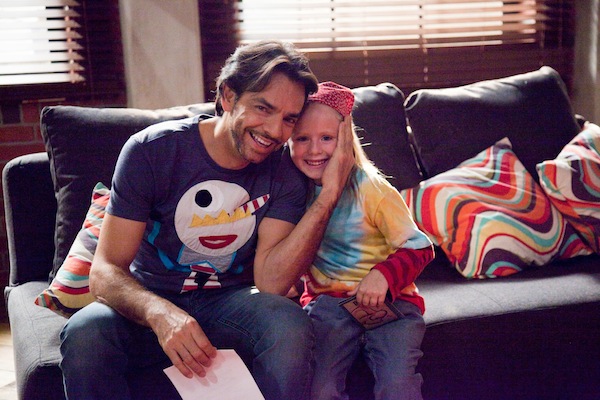 Eugenio Derbez is one of the greatest entertainers Mexico has ever had and now he’s managed to cross over to Hollywood with a film that has been his dream-in-the-making for over 10 years: Instructions Not Included. This adorable bilingual (English/Spanish) movie, distributed by Pantelion Films, opens in select U.S. theaters this Friday, August 30th. We don’t just suggest you go watch it, we urge you to not miss this movie! Not only will you laugh and will your heart strings be pulled, but you will let go a sigh of relief that finally, finally, Hollywood has captured a beautiful slice of Latino bilingual and bicultural, and even blended, families.

Eugenio Derbez, who not only stars, but also wrote, directed and produced Instructions Not Included,  isn’t the only one that shines in this movie. Loreto Peralta clearly steals the show and Derbez graciously lets her. This is Loreto’s first film, but it certainly shouldn’t be the last. This 9-year-old girl, born and raised in México City, was discovered only after the casting had gone through so many rounds of boys and girls and just couldn’t find the right kid for this part. One of the main requirement? S he must be perfectly bilingual. And Loreto is just that. Not only is she completely at ease going back and forth between English and Spanish, but she’s also an innate artist with incredible talent and a smile that melts our heart. You would think this part was actually written for her!

We got the chance to watch the movie at a private screening organized by Latina Bloggers Connect and Pantelion Films, where we also got to meet and talk with Eugenio Derbez and Loreto Peralta. Of course, we had to ask them about the importance of being raised bilingual. You will love their responses and should bookmark this video for when you need extra inspiration!

I really don’t want to tell you much about the movie’s plot because I don’t want to spoil anything for you. You can check out the trailer below and just know that you will laugh, you will cry and you will walk out of the theatre feeling warm and fuzzy and will want all your friends to feel it too. ¡Es en serio!

All 3 of my girls adore Minnie Mouse

of course as if your internet site however you must look at the transliteration about numerous of the threads. A variety of them usually are rife with punctuational challenges and I believe that it is really bothersome to see the truth however Let me surely come just as before again.