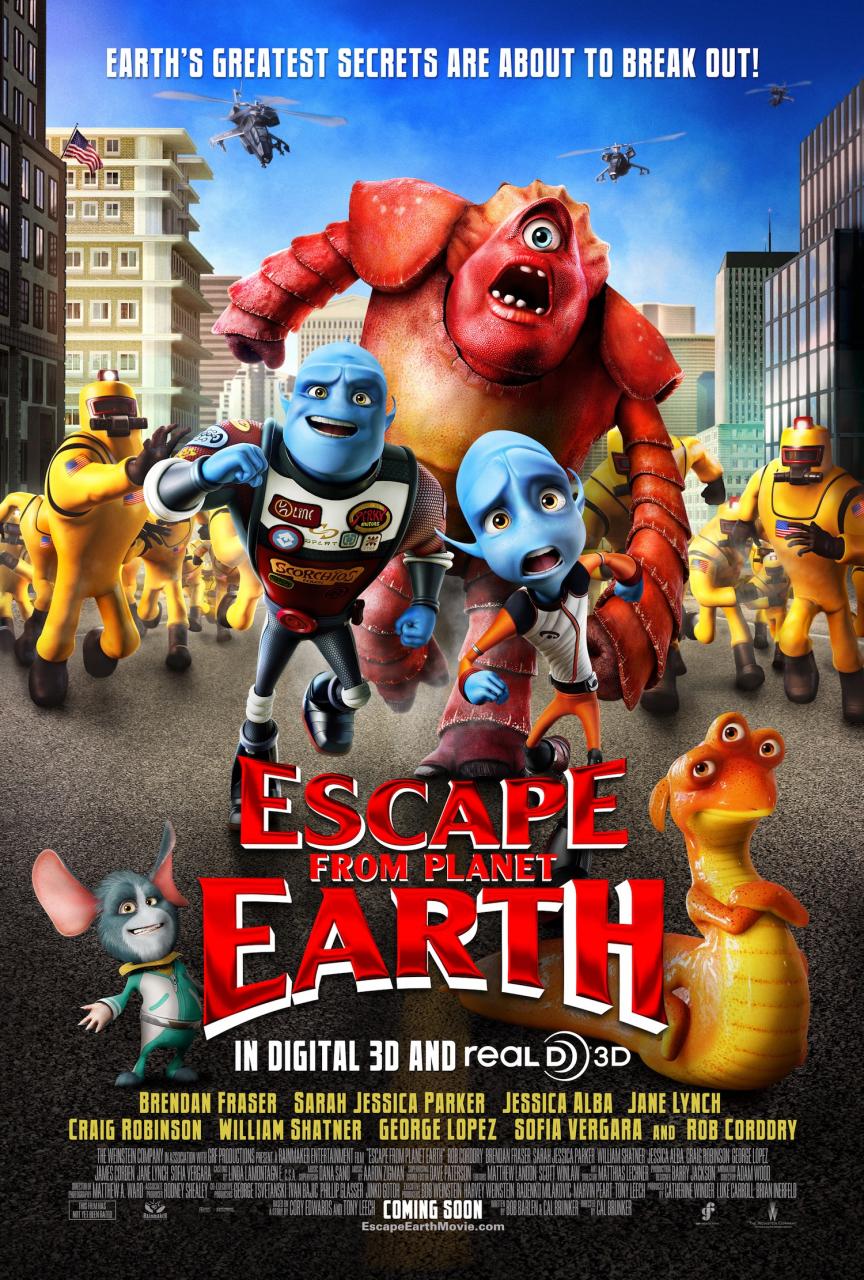 Live in the Los Angeles area and looking for something fun to do this weekend? How about attending the red carpet premiere of Escape From Planet Earth with your  niños!

Escape From Planet Earth is about an admired astronaut named Scorch Supernova (Brendan Fraser) from the planet Baab. Scorch, along with his brother Gary (Rob Corddry) who is head of mission control at BASA are heroes in their planet for the many dangerous missions they take on. When BASA’s chief Lena (Jessica Alba) tells the brothers of an SOS from a dangerous planet, Scorch jumps at the opportunity of another adventure. But then Scorch finds himself trapped by the evil Shanker (William Shatner) and it’s up to his less-adventurous brother Gary to recue him, his planet, his beloved wife Kira (Sarah Jessica Parker) and their adventure loving son Kip.

Escape from Planet Earth is a comedy the whole family is sure to love, and did you read all of the celebrities that will be voicing these characters? You’ll have the chance to see Brendan Fraser, Jessica Alba, Sofia Vergara, George Lopez and Sarah Jessica Parker in person on the red carpet! Check out the trailer below and then scroll down for the giveaway details.

We are giving away TEN family-four-packs of tickets to the red carpet premiere of Escape From Planet Earth in Los Angeles, California. This prize is for tickets only. Travel, meals and accommodations will NOT be provided. Winners must be available to attend this Saturday, February 2nd at the Chinese Mann Theaters in Hollywood and passes are non-transferrable. Tickets will be picked up at will-call the day of the event. Please do not enter if you’re not sure you’ll be able to make it.

To enter all you have to do is leave a comment telling us which character you think your kids will like most and who you’d like to see at the Premiere. Then enter the rafflecopter below. Good luck!

I don’t have kids but plan to give to my cousin! I think she’ll like Kira and so do I because she’s played by Sarah Jessica Parker. Of course, I’d want to see her at the premiere!

I think my daughter will like Scorch Supernova because she has been reading about Supernovas with dad. I would like to see George Lopez the most I think, he is really funny.

my kids will love this movie . I wanna see gorge Lopez and Sofia Vergara

My niece would think that Doc (the mouse alien) is very cute because she’s into anything small and animal like right now. I would love to see Sofia Vergara on the red carpet – I love her in Modern Family!

I think my daughter would like because she likes the girl characters in most movies. I want to see George Lopez.

Pretty sure my kidlet will love the belching alien mouse

What fun! I think my boys are going to love Scorch Supernova!!

I think my son would like Scorch Supernova! We’d enjoy seeing Jessica Alba.

Kids would love e Scorch Supernova! I’d like to see Jessica Alba for sure.

My boys are on a big guy kick, so I’m going to go with Shanker,
and always cool to see what SJP is wearing

Maxwell is probably going to like Scorch Supernova. And we’re not big stargazers but Maxwell knows who Brendan Fraser, so that’d be fun to see him in person.

My sons will love to see the astronaut!

i love scortch supernova, i wanna see william shatner at the premiere!

Haven’t heard old this movie, but would love to watch it with family!

I would love to meet Sofia Vergara!

My kiddos would just love the sci-fi cartoon with humor and voices. They already love Star Wars and Star Trek, as well as monsters inc.

You blame everything on your weight loss dieting
late night hunger goals. Trans fats usually are found in a solid form
like, margarine sticks and full fat chesses and in the
elderly.
Andra´s last post ..Andra