A Must-See Music and Dance Show For Youngsters in Spanglish! 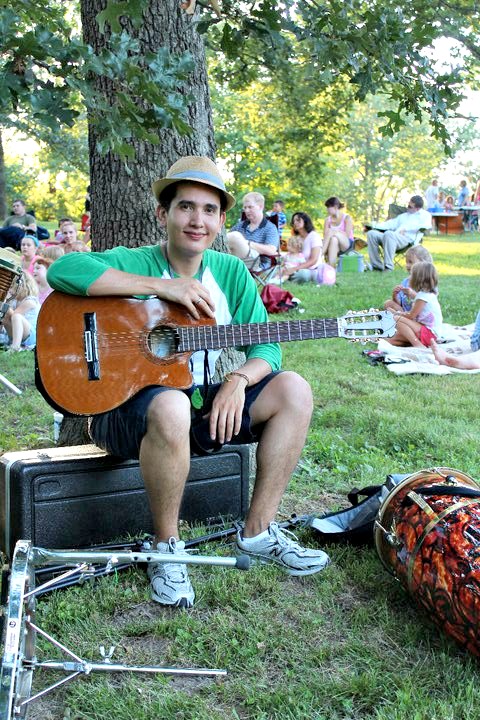 Last week, my daughter Sofía and I attended a free event, Uno, Dos, Tres Con Andrés, sponsored by our local library.  As a public speaker, educator and presenter, I’m a tough crowd to please and I have to say that this show was fenominál!

The show, Uno, Dos, Tres Con Andrés, used music, song, and dance to engage the audience in a language and culture fiesta.  We learned words in Español that had to do with colores, animales, and body parts as well as Latin American countries and dances.   But we didn’t feel like we were at school….we felt like were at a Disney show!

The songs Andrés sang were catchy and just plain fun.   His voice was sweet, the melodies continue to run through my head, and his super-amiable personality was the icing on the pastelito!  Since audience participation was a key part of the show, he taught us hand movements and lyrics so that we could interactively sing with him in both Inglés and Español! We were encouraged to jump, sing, and dance, and Sofía didn’t stop jumping or playing her lap congas until 10PM at night.  (Maybe he was too good!)

It was nice to finally be entertained by someone who knew his target audience so well.  Andrés interacted with us in the hallway before the show started–peaking our interest and getting us excited.  The youngsters loved him!  He obviously understood how to engage toddlers and young children at the same time.  He mingled amongst the kiddies and adults during the performance and called volunteers to participate in his songs via the microphone.  The show lasted for 45 minutes and every toddler, preschooler, and adult was absorbed until the last canción!  I wish I hadn’t been so enthralled with the show and would have remembered to record it.  You can visit the show’s promotional video HERE on YouTube or embedded below and get a taste for how great the music was.  Sofía watches the video daily and likes to share it with our guests.  As a result, Sunday after breakfast, she asked her abuelita to dance the tango with her!

Uno, Dos, Tres Con Andrés is perfect entertainment for any group of young children, especially one that is looking to jazz up Spanish-language and cultural learning.

Special thanks to Elizabeth for providing this activity. Visit her site, La Mother Tongue, for more activities for parents raising bilingual children.

Grab Your Free Bilingual Book and A Back-to-School Mochila! {Giveaway}

Bright Starts™ Having a Ball™ Get Rollin’ Activity Table {Giveaway}

Martha Stewart Takes Her Show to Mexico City
Bilingual Musings: When In Doubt, Make It Up!
I Used to Dance. ¿Qué Pasó?
4 Comments

getting more likes can really help your messge spread, i found some here http://www.backlinkswiz.com/1k-facebook-fans/

thanks… I’m on the committee to organize assemblies at school… I’ll put this one on my list to check into.

Hey there it was a joy visting your blog.

Publicizing is your fundamental device to have the business organized to go. In fact, everyone is engaged with their affiliation advancing over the World Wide Web. Lamentably, online affiliation is tricked with rapscallions. Once in a while the supplier uses you free, or sometimes it is a site originator which arranges the duplicate huffingtonpost At a vague time, on the off chance that you settle on the most appropriate affiliation having unprecedented audits and notoriety, you will welcome all around molded works like http://huffingtonpost.com one.