Fall is here which means it’s time to cozy up and head indoors for some movie fun! If your looking to treat your kids after a long week of school you can check out some of these long awaited movies. 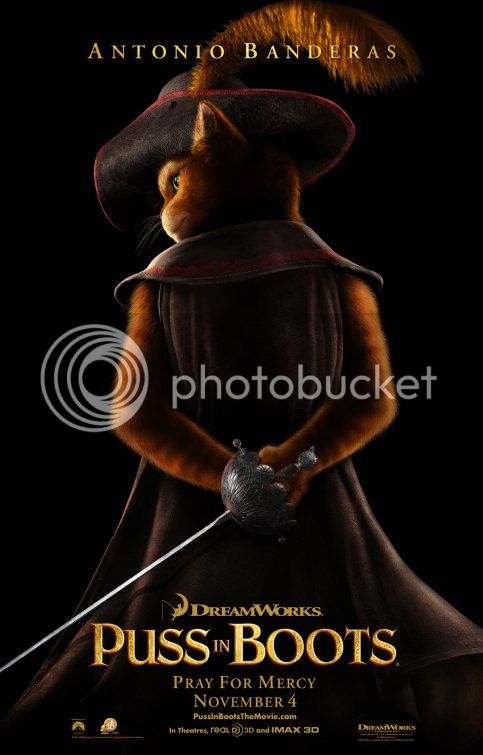 This Shrek spinoff focuses on the early life of Shrek and Donkey’s feline friend. Before Puss in Boots was the coolest and most daring cat around,  he lived in an orphanage where his only friend was the mischievous egg named Humpty Alexander Dumpty. The movie follows the adventures of Puss and Humpty that eventually lead to Puss becoming a wanted cat.  Years later the outlawed Puss decides to take destiny into his own paws and ends up having the adventure of a lifetime.

We all remember Mumble, The Master of Tap. Now he is all grown up and has a son of his own with Gloria. But Mumble has a problem, his tiny son, Erik, doesn’t want to dance. To top things off the penguin nation is facing new dangers. Now, it’s going to take everyone working and dancing together to save them all.

Walter, the worlds biggest Muppet fan is on vacation in LA. He and his friends Gary(Jason Segel) and Mary (Amy Adams) discover the plan of an oilman named Tex Richman (Chris Cooper)  to raze the Muppet theatre and drill for oil that was recently discovered there. Now, the muppets had all gone their separate ways, but they reunite to stage the greatest Muppet telathon ever and raise the $10 million dollars that are needed to save the theatre.

“Real Steel” is set in the near future where robot boxing is a top sport. A struggling promoter (Hugh Jackman) thinks he has found a champion fighter in a discarted robot. In the process of training the robot he discovers that he has an eleven-year-old son who wants to get to know his father. Read our full review here and interview with Hugh Jackman here.

Many Christmas movies evade the question: How does Santa really deliver all those gifts in one night? Well,  this November Arthur Christmas will take us into Santa’s ultra-high-tech super-hidden operation underneath the North Pole and reveal that answer.But at the heart of this story is a Christmas classic, and Arthur who must complete a very important mission before dawn.

Alvin and the Chipmunks: Chipwrecked

The Chipmunks and Chipettes go on vacation where they turn a luxury cruise liner into their personal playground. But then they become ‘chipwrecked’ on a remote island. While the ‘Munks and Chipettes are trying various ways to get back home, they accidentally discover that the island they are on is not as deserted as they thought.

The Adventures of Tin Tin

“The Adventures of Tin Tin” directed by Steven Spielberg is based on the series of books by Hergé. The movie follows the journey of Tin Tin, a relentless reporter, who sets off on a treasure hunt for a sunken ship with Captain Haddock. However, they find out that someone else is in search of the ship as well, and their that’s when their adventure makes a turn.

Hugo is an orphaned boy who secretly lives in the walls of a busy Paris train station during the 1930’s. He lives a hard life looking after the clocks of the strain station and keeping his presence there hidden from the authorities at the same time. When he finds a mysterious mechanical man that has been left behind by his late father, he gets caught up in a mysterious adventure.

Antonio Banderas Tells Us Why Language Connects Our Children to Culture {Video}
Cars 2 Racing Into Theaters {Giveaway!}
La Rana René or Kermit The Frog? Setting It Straight
No Comments