A Tip for Taking Spanish Beyond the Dual Language Classroom 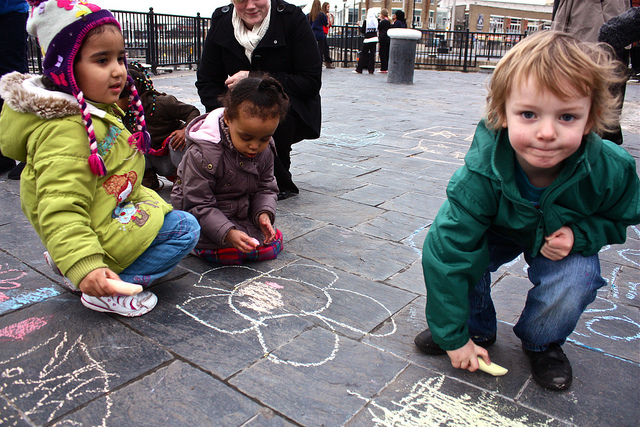 A few weeks ago I received an email from a ‘Spanglish mami’ asking me a great question I thought I would address on a specific post. The question had to do with Spanish ‘outside’ school hours – specifically playgroups designed to help children continue developing their Spanish-speaking skills. She was wondering if I knew of any particular playgroups she could reach out to.

At the time I not only thought it was a great question, but it also sparked my curiosity. I went online and decided to do some research. In the past, I had used and met great people using a website designed to ‘put together’ people with similar interests from cooking, road biking, knitting, to girl friends just trying to come together to watch a movie or grab a quick bite – meetup.com. I quickly searched for children playgroups whose purpose was to spark foreign language interaction. I was pleasantly surprised to say the least.

There were children’s groups everywhere in the United States. My search was focused in an area in Southern California, yet I was really excited to see groups in New York, New Jersey and everywhere else in between.

I gave the suggestion to the mom who had contacted me and asked her to reach a couple of groups I had found. I also asked her to please let me know how things went, as I was curious to see where her quest would take her. I heard from her a few days later, and while the groups were a bit too far from what she was looking for, she had been talking to one of the group’s organizers who gave her ideas to get started on her own group if she wanted to.

Playgroups are a great way to let children experience the language in a much less structured environment. From my own experience, I know that as soon as students go to recess or lunch the language of choice is English, regardless of them being in a dual language program or not.

Have you been successful at setting/joining playgroups for children? If so, many other Spanglishbaby readers and I would love to know. Of course, we also invite you to visit SpanglishBaby Playground, where so many of you have already started forming local groups!

Much love and happy talking,

Photos by National Assembly for Wales

We have a group (81 members strong) on meetup.com called South Bay Madres y Padres. We are focused on the South Bay area of Los Angeles and we would love to have more madres y padres join. Having Spanish-speaking peers is such a great motivator for kids to use their Spanish language skills in a fun and interactive way and it’s a great way for us parents to share tips, ideas, and information on schools, classes, etc. that can foster strong Spanish language skills in our children. Check us out!

Kelly was born and raised in Ecuador, South America and moved to the United States when she was 18. While she obtained a bachelor degree in business administration and later worked in the private sector for a few years, deep inside she always knew she wanted to be a teacher. Kelly returned to school and obtained both teaching credentials and a master degree in education - she has not looked back ever since (well...a couple of times). Kelly's teaching journey has taken her many places over the last seven years, and this year she's moving to a dual-language school, which is the main reason she decided to start her own blog and create her own bilingual teaching resources.

View all posts by Kelly A. Serrano