Is Calling a Child “Prieto” An Insult? 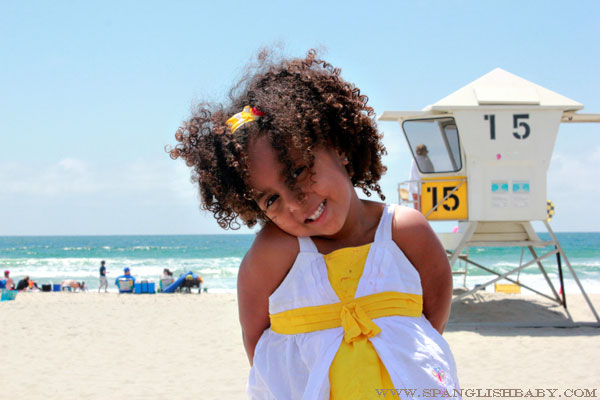 For many families, the summer months are revered as the most special of the year. Filled with days of leisure, vacation and adventure, the magic of summer has school-aged kids counting down the days until it arrives. The sun shines bright, the days are long and the pavement beckons for exploration.

As a child, I remember inhaling the fullness of summer freedom — staying up until the wee hours of the morning, waking up after lunch and riding my bike down to the shores of Southern California beaches to meet up with friends. Wearing shorts and a bikini top, and unfortunately not an ounce of sun block, it would take a week’s worth of summer vacation before my Cuban skin turned many shades darker. After the whole year without it, I began to hear the word prieta used within my family.

Honestly, I never even considered the word an insult. All my friends were white Americans — as the only Latina, I was by far among the darkest — and they all seemed to work hard for the tan that my olive skin achieved without effort. “You have the most beautiful skin color,” they would say. “You’re so lucky! You tan so easily!” I had never been hurt by my school-aged girlfriends. In fact, during those summer months, it was my primary goal to get as dark as I humanly could. Everyone looks better with a tan!

It wasn’t until I married my African American husband, had his children, and met other families like mine, that I became aware that basking in the sun of summer months was ingrained with a fear of becoming prieto. Only recently have I understood the insult behind the word, pegged squarely on what happens if you embark on too many sun-filled adventures. Dare I allow my children to sink their toes in the sands of beaches, swim all day at the hotel’s pool or ride their bikes outside while the sun sits strong against their brown faces? The risk of becoming prieto is almost certain for my biracial and bicultural kids. And regardless of who it comes from, I refute any claim that keeps my children hidden from the joys of sunshine.

Latinos come in all shades, but we still revere the most light as beautiful. Why is that? Phrases like mejorando la raza bring question to the pride I have in my heritage and make me worried for the challenges my children will face as dark-skinned, bicultural Latinos. The summer months are meant to build family legacy — traditions and bonds, alike. I’m not afraid, nor ashamed, of our darkening, brown skin. But still, I wonder, do you believe there is insult in being called prieto?

How Can Monolingual Parents of Dual Immersion Students Help with Homework?

Talking To Our Bilingual Kids About Skin Color
Isolating the Bicultural Latino Because of Fluency Is Not The Answer
What Does “Hispanic” Mean to You?
14 Comments

In today’s world with evolving demographics, I pray that our children can have and develop a deep understanding and connection of who they are and can identify with their cultural background. Being the mother of an Afro Colombian American child, I am charged with assuring that my child loves the skin she is in and knows all about her cultural heritage as not only is she bilingual, but multicultural. With that knowledge will come the lingo that tags along behind the cultural aspects, but assuring that our kids can feel comfortable with who they are and can use words to identify themselves in a positive manner we can lower the insulting factor.

It will take us as parents to use words in an appropriate way that will not lead to negative connotations. In today’s day and age, racial profiling and language is stigmatized depending upon the words used, who said it and to whom. I often remembered hearing the word “prieto” used by many Spanish speakers in the south west part of Texas when referencing Black Americans. However, I pondered did the person not realize they were in the same skin as the ones they would call “prietos”? When I think of terms like these and others that were used in a derogatory manner, I find myself stepping out of the box and changing it to a positive manner. Instead of labeling oneself with the word we can use other words to still describes one’s beauty and its changes with respect.

In essence, depending upon the context of word, it may deliver insulting messages or carry negative connotations. Then again it all depends on who is using it. On the bright side, with such cultural diversity and relationships that is flourishing in today’s generation we have the power to assure that our kids truly understand the context of certain words, so that they are not offensive or insulting.

Well said! “…not afraid, not ashame…” My personal experience has been that it depends on who and in what context the word is being used. I have felt the insult and the joys of people commenting on my skin tone. My focus now is on my bicultural and biracial children to enjoy life and feel proud of who they are as a whole.

I’m Cuban-American but very fair-skinned and I do not tan well at all, LOL! But growing up in Miami, I never heard anyone use the term “prieto” in a derogatory manner. In fact, I’ve even heard people use the phrases “mi negro” or “mi negra” with affection to a person/spouse/friend etc; and even in music. So I think it depends on the context. I don’t know, it’s kind of different in Cuban Spanish, or at least the Spanish I grew up with. (I’m fully bilingual.)

That being said, no little child should ever feel ashamed of his or her skin tone, no matter what it is, of course!

My grandfather always calls all his dear ones as “negrito” or “negrita” regardless of skin color. In fact, I’m white, blue eyes and blonde, and he has called me “negrita” all my life. I can truly tell you that at least for my grandfather it’s a term of endearment. However, the word is never used to describe skin color, it’s only used like saying: “my dear”, “honey”, etc.

One day when I was in college a friend of mine asked me why did my grandfather called me “negrita”. It was the first time I ever thought about it that way.

Whether it’s right or wrong, I’m not sure. I just thought I should share my experience.

Good discussion. I’ve recently had this discussion with my little ones too. My mom told them they were “black” from the sun and they couldn’t understand that at all. She told them they were gonna get “too black” being out in the sun and said it as a derogatory thing…it’s difficult in one conversation to help them understand that getting darker isn’t a bad thing, but that some people think it is.

If you ask me, this is less about getting to dark but more about skin cancer awareness… when I was little, my parents were one of the few people who would use sunscreen, and now, people are afraid of getting a tan because now, in their minds, tan= too much sun=possible skin cancer. This being said, calling somebody by their skin colour is not always offensive, I think it is more about the intention behind the words that can be offensive…

In terms of the word “prieto” since I mostly hear it used by my husband’s family in a derogatory way about African-Americans, my perception is that it is a negative word even though I realize that it can be used in a positive way. I get sick to my stomach when I hear about “mejorando la raza” and all that as I see it very clearly in my husband’s family, the preference for lighter complexions (which ironically includes my sons) which is just ridiculous. My daughter is olive complexioned and is gorgeous and I will do everything I can to instill a positive view of her skin color in her.

My dad always called my brother “sambo” or “Moreno” because of his curls and because he was darker than we were, but it was always as a term of endearment.
With skin cancer and so many people spending money on tanning, people that are naturally able to tan and naturally darker should be able to flaunt their skin!!

Those terms are insults, no matter the intention behind them. It’s like calling somebody a “darkie.” It’s still the 19th century in some places!

I think,The summer vacations children are enjoying the most

Very interesting blog & discussion! Back in the day, I was a hippie chick while I was a elementary teacher! I never thought there was anything wrong with peace, love and understanding, to quote Elvis Costello. I encountered, for the first time in my sheltered white life, extreme prejudice! I was always hurt and embarrassed by the attitudes of people who would consider me dirty and/ or unethical. But would day I watched a friend deal with a person who called us freaks . He grinned broadly, patted his chest/ heart with both hands and crowed proudly, ” That’s me! I’m a Frrreeakkk! “. It was so amiable, so funny, so proud that I was never ashamed of being a hippie freak again. I learned to embrace my own – no matter what I was. I taught this lesson to my daughter. As any good parent would!

The most effective place to discover no charge ebooks, audiobooks, pdf books or other electronic versions of bestselling publications is right here.

Calling someone a Moreno or Negrito for the most part seems ok, but The use of Prieto in reference to skin color is derogatory.

Great goods from you, man. I have take into account your stuff previous to and you’re simply too
excellent. I really like what you’ve received right here, really like what you’re saying and the best way
wherein you are saying it. You make it enjoyable and you still take care of to keep it
smart. I can not wait to learn much more from you. That is
actually a wonderful website.