Confessions of a Gringa Latina 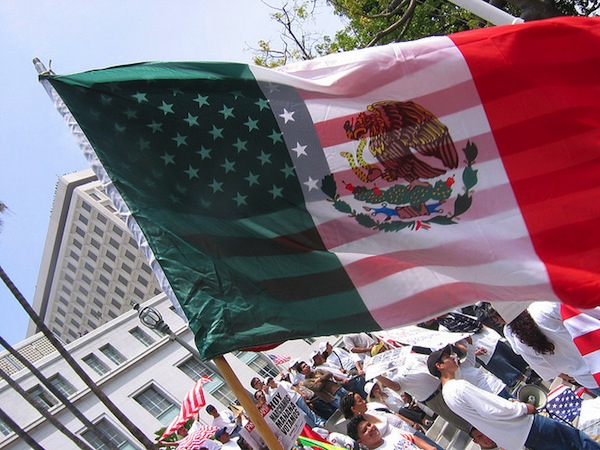 You know those butterflies we tend to get when we’re about to do something big? Whether it’s giving a speech, stepping into an important meeting, jumping out of a plane or participating in a race, I am constantly looking for opportunities that provoke this simultaneous feeling of nervousness and excitement.

While I admit that I am far from a good singer, and still have much to improve on in terms of speaking in front of a crowd, the favorite butterflies that I get are, surprisingly enough, when I get to put a microphone in my hand, step on a stage, and belt out anything from reggaeton, banda music, rock en español, hasta salsa y música tropical… essentially, any genre of música latina, I’m game. With my light freckles, green eyes, and Irish/Norwegian background, let’s just say I’ve had my share of confused, then delighted looks from Latinos and non-Latinos alike. It’s all in a day’s work for me, being a “Gringa Latina.”

I once heard a quote from American golfer Paul Azinger, “If you don’t have butterflies, it’s because you know you have no chance.” With plenty of butterflies, even as I sat down to write this article, that is exactly what I’m seeking with this piece. A chance. A chance to explain more about my experiences and perspective as a Gringa Latina. A chance to thank people and companies that have given me the opportunity to follow my passion, both personally and professionally. And hopefully, a chance to hear from Latinos themselves, as I’m intrigued as to their thoughts on how thousands of us, who have no sangre latina, can feel so deeply about their language, culture and traditions.

While I could most likely be the subject of a study or even a book that explores the origins and social psychology behind this inherent connection to the Latin culture (Psychologist Brian Weiss might trace it back to a past life, while the Journal of Neuroscience may link it to a stronger connectivity in the white matter of the auditory cortex), the best way to explain it, in simplest terms, is that I’m most “in my element” when I’m speaking, listening or writing either in Spanish, or about the Hispanic community.

There is not an exact “moment” that it happened for me. Sure, I can remember watching soccer games on Univision when I was 6 years old in the suburbs of Chicago, I remember my first Spanish class at 14 with Sr. Snyder and getting A’s in Spanish the next eight years through high school and college; and of course I remember the life-changing experience of studying a semester abroad in Spain when I attended Indiana University, and you guessed it, majored in Spanish as well as Journalism.  At that point, I knew that I wanted Spanish in my life every day from then on — which of course meant marrying someone I could speak Spanish with, and someone to teach Spanish to, as we started our family.

Today, Guillermo and I have the unique pleasure of teaching our now 2-year old son, Elijah, the best of all his worlds on a daily basis. Fortunately, we live in a diverse community with no shortage of ethnic celebrations throughout the year. So with that comes pølse and folk music at the Norwegian Constitution Day Parade, boxty and rugby at the Irish American Heritage Parade, y claro, el grito y ballet folklórico at Fiestas Patrias celebrations, not to mention other Latino-inspired festivals throughout the year. So for me, it’s certainly not about neglecting my own roots, but rather, embracing an additional way of life. I look forward to living vicariously through Elijah and seeing his views and experiences, as he actually does have the ‘sangre latina’ that I never had, along with the European blood that I do have. I realize though, that he may be presented with his own challenges as it relates to identity, wondering where and with whom, he feels in his element.

From my perspective, I am forever grateful to the companies that gave me the opportunity to shine, once I followed my passion and pursued positions that allowed me to speak Spanish and represent the Hispanic community. Whether it was the team at Univision Radio San Diego, who not only taught me everything I know about karaoke en español, but truly immersed me in situations where I would learn — trying pozole for the first time outside of a concert venue, opening the doors to their cabinas and even letting me record commercials en español, and of course, engaging crowds at store-fronts throughout the city, as “La Crazy Tracy” formed an integral part of their Marketing and Promotions Department. Or take the team at the Mexico Tourism Board Chicago, where I was able to help coordinate press conferences for dignitaries like then-President of Mexico Vicente Fox, attend trade shows encouraging more incentive and convention-based travel to Mexico, and lead a group of journalists to Ixtapa-Zihuatanejo so they could experience the magic and lure of the country for themselves.

Now, we are celebrating one of my favorite times of year, as the consulting firm that Guillermo and I launched three years ago will be implementing a series of Hispanic Heritage Month celebrations with our clients. My team and I get to develop recipes with bilingual chefs and culinary students, integrating many authentic and even mainstream brands into each dish. We get to partner with Spanish-language radio stations to engage listeners and provide scholarships. We get to merchandise stores to reflect the booming demographics of the Latino communities they exist in… I could go on and on…

Above all, many thank you’s are in order. Gracias a mi suegra mexicana, who after each dish she makes, whether it’s chiles rellenos, picadillo con salsa, or enchiladas suizas, I seem to have a new favorite. Thank you to the family at a nearby park that welcomed my son and I, though we were complete strangers, to watch as each of the children at their party had their turn at the piñata — and in the meantime, teaching me a new verse to “Dale, dale, dale” that I had never heard before! Thank you to sites like SpanglishBaby and Latinaish who bring out the best in people like me, and provide useful resources for thousands of us “Gringo Latinos” who want to keep the conversation going both with friends and families alike.

And now, as I douse my Edy’s Outshine Mango Fruit Bar in Valentina Hot Sauce, I await with más mariposas, your experiences either as, or with, a “Gringo Latino.”

Raised in Chicago and of Irish heritage, Tracy Galindo is fluent in Spanish with a career spanning more than 10 years  working closely with the Hispanic community, including Univision Radio, the Mexico Tourism Board, and the Ethnic Marketing Desks for grocers Jewel-Osco and Albertsons. In a matter of 13 months, Tracy married into a Mexican family, started her own marketing firm, and became a mom. When she’s not helping companies skyrocket their sales, Tracy and her husband, Guillermo, channel their energy toward volunteering, traveling, and raising their toddler to be bilingual and bicultural. If you are among the growing number of “Gringo Latinos”, join us on Twitter @gringolatinos or LinkedIn. We talk movies, music, and much more!

Why I Had to Lie About My Child’s Bilingualism

Latina? Hispanic? Do These Labels Even Matter?
How Where You Were Born & Raised Defines Your Latino Identity
What Being Latina Means to Me
6 Comments

Thanks for sharing this Tracy! I could actually identify because that’s how I feel about the Mexican culture. People could swear I’m mexicana and I promote the culture so much. Sometimes you can’t explain certain affinities, but I tend to lean toward Brian Weiss’ explanation more

I absolutely LOVE THIS! I too consider mysely Latina de corazón! I love the culture, the people and the language! I visited Guatemala in June and I must say it was the most amazing thing I have ever seen! I was so welcomed by its people and felt a sense of home! Thank you Tracy for this beautiful article!

That’s great, Tracy! Your story is definitely interesting and I look forward to hearing more about you as you continue writing in your blog. I must point out, however, that Latina/Hispanic/what-have-you roots do tend to have European roots. Perhaps not stereotypically fair-skinned roots, but still. Other than that little tid-bit, I loved your entry, as it was funny, warm and insightful. Keep up the good work!

Tracy! I feel the same way!!! My twitter is @gringaorgullosa

I was the first person to take both AP Spanish classes my senior year of high school (Literature and Language). And I am also from the Chicago suburbs, Glenview to be exact. I now live in Austin, Texas and teach bilingual 1st grade (dual language) and use my Spanish fluency every single day teaching in both languages. I love my job and I love helping other children become bilingual not only based on their heritage but also based on their interests and the many benefits that bilingualism will bring them.

All of these comments and experiences are so inspiring! Thank you for your thoughts, feedback and encouragement! Ana, yes, that is so true — I’ve spoken to Latinas much like yourself that do have a passion for other cultures outside their own, so I suppose my article could expand beyond strictly “Gringas!” Would be fun too, to dig deeper into the Brian Weiss theories, wouldn’t it

Angel, it is so beautiful to hear about your experience with Guatemala this past summer — so glad you can relate! Alma, thanks for the kind words — you are right on target with your note about the European influence…I apologize, I should have been more specific in my article; however, when I referenced ‘European blood’ I was referring specifically to my Irish, Norwegian and German heritage as opposed to Europe as a whole. And Carolyn, how cool that you are also from the suburbs of Chicago…I am now following you on Twitter and look forward to hearing more about your adventures in teaching in a dual language setting — how rewarding that must be!

Desirable element of information. I recently stumbled upon your internet site plus in accession capital to say we be in simple fact loved bill your site blogposts. In any case I am subscribing on the for and in many cases I actually success you receive admittance to continuously rapid hr.