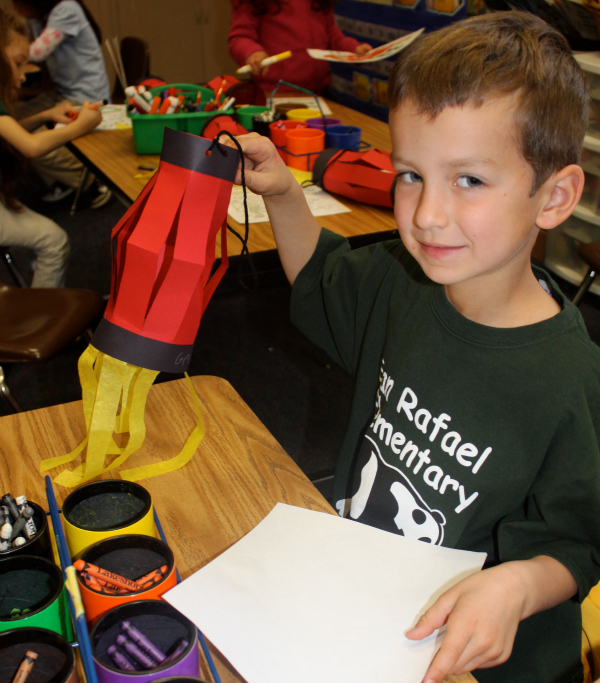 Editor’s note: In the next months, we’ll be bringing you interviews with those who have first-hand experience with dual language immersion schools or programs: the parents who have their kids enrolled in them. The idea is to give you a closer look at what these programs are really like, how and why they work, as well as some of the challenges they face. Thanks to our contributor Elsie for coming up with this great idea!

After sharing my experiences investigating Kindergarten options for my daughter, including some Spanish Immersion Programs, it occurred to me that it might be useful for our readers to hear from parents at these schools, whose kids are living the immersion experience day-to-day. Today, I’m happy to share my first interview with a San Rafael Elementary Spanish Immersion parent, Michelle Calva-Despard:

Spanglishbaby (SB): Many of our readers are bilingual themselves and hope to pass this legacy on to their children. However, there are also many Spanglishbaby readers who are monolingual. When did you become interested in bilingual education and why? Is it an old or new tradition for your family?

Michelle: For me, personally, Spanish is a heritage language. My father’s family immigrated to the U.S. from Mexico just a few years before his birth. Spanish was his first language and he arrived at the Kindergarten door without a speck of English.

Spanish wasn’t an authentic home-language for me as a child, but I heard a lot of it through my extended family and always had an interest in becoming bilingual. Unlike my three kids who are recieving a bilingual education since kindergarten, I learned my “foreign language” as a teenager by dissecting sentences and conjugating verbs on worksheets. It took me 10 years of study (middle, high school, college) and then a year abroad at university to become a proficient Spanish speaker/reader/writer. My children will likely exceed that level of fluency before they leave elementary school.

Also, even though I speak/read/write fluent Spanish, it will never be as authentic to me as English. I think that for my children, who are acquiring their second language in that supreme window before the language centers of the brain fully mature (around age 14), this will be different. (How ironic that I began my formal Spanish language studies at the age of 14!)

Michelle: Although the plan is to move toward a more “project based learning” style, the model of instruction currently rests in a more traditional seat — which is ironic as Dual Immersion Programs are hardly traditional in the U.S. At San Rafael the 90/10 model of instruction is implemented. This means that in kindergarten, the partner language (in our case, Spanish) is used for instruction 90% of the day. The remaining 10% is taught in English. Each year, the percentages shift by 10%, so in first grade 80% of the day is taught in Spanish, in second grade 70%. By fourth grade 50% of the school day is instructed in Spanish and 50% in English.

SB: What was the transition like for your child when they started at San Rafael? How did you notice their language ability evolve over time?

Michelle: I did speak to my children in Spanish at home, but even though they understood me, they consistently responded in English.

Then kindergarten began for my oldest daughter. During the second week she received a sticker for saying “¿Puedo ir al baño?” That was it. She came home and informed me that she was going to “hablar en español” all the time. As is often the case, with my third child I spoke less Spanish than I had with the first (I knew I would regret this and I was right!). My son entered kindergarten with far less Spanish language comprehension than his oldest sister had. The program still works though. As most of the students enter kindergarten with zero Spanish language ability, the teachers are prepared and ready to help them meet the challenges of a dual immersion program.

SB: Language is not only an intellectual skill, but also a social skill. How has learning Spanish enriched your student’s social experiences and friendships?

Michelle: Besides friendships with Spanish dominant Latino students at school, as they mature, my children are becoming more comfortable jumping into Spanish conversations away from campus. In Los Angeles County, it’s not hard to find Spanish speaking experiences. From ordering food in a restaurant to taking ballet foklorico dance classes, we try to take advantage of our surroundings.

SB: How does San Rafael incorporate Latino/a culture and celebrate the diverse backgrounds of its students?

Our program has attracted quite a multicultural cadre of students outside of English and Spanish dominant students. We have a student whose first language was Polish, for example, and students of different religious faiths. The very nature of a bilingual program provides a dual “lense” through which to see the world. This opens the door to a variety of possibilities–from Chinese New Year (instructed in Spanish) and Hanukah, to taking a deeper look at the significance celebrations like Black History Month.

SB: When I toured your school, I was impressed by the active PTA. What is the experience like for parents at San Rafael? How much parent involvement is encouraged?

Michelle: Well you’ve struck a cord here–as I’m completing my second term as PTA President this spring! The dual language program at San Rafael is not something that any of us “stumbled into.” Enrolling our children in this program was a very intentional, informed decision. The types of parents who make a choice like this are more prone to becoming actively engaged in their child’s school. I have said to many an inquiring parent: “I came here for the program but now I stay for it and for the community we’ve built!

SB: No school is perfect. What are some of the challenges, budgetary or otherwise, facing San Rafael, that prospective parents should be aware of?

Michelle: Class sizes are larger than we would like. We’ve had a hard time funding a program coordinator which means the crux of program development, recruitment, etc… has landed in the principal’s/teachers’/parents’ lap. Like all public schools in California, we could use some more money!

SB: What is your child’s daily schedule at San Rafael?

Michelle: My children have a similar schedule to every student in the Pasadena Unified School District. They receive the same content and teachers instruct the same standards. The only difference is the language of delivery.

The school day begins at 7:50 am, and ends at 12:35 on Mondays, 2:15 Tuesday-Friday. It was hard, at first, to get used to such an early start to our day, but it didn’t take long and now I really like it. Even after a full day of school we can hit the park or library on the way home and still make it back before 4:00!

SB: What does your child love most about San Rafael?

Michelle: I know all three of my kids would answer this question the same: AMIGOS!!!

SB: How can a prospective parent learn more about San Rafael and enrollment?

Attend a PTA meeting (first Thursday of every month alternating after school/evening.) I welcome anyone interested to come get a taste of what we do at San Rafael. It’s been a challenging, sometimes crazy, adventure–and I wouldn’t trade my family’s experience for anything.

You can find more information here.

Deciding What Type of School is Best for a Bilingual Child

Week in Links for #BilingualKids — May 24

Interesting interview. The kids are right, most important thing are “amigos”

Excellent idea to have stories about the schools! When I was trying to decide what school to place my daughter in, I looked extensively online for stories about them. We decided on a 100% one way immersion program in the San Diego area that has been a great experience the last two years. If you are interested in doing a story on it, please feel free to contact me!

Please help me spread word about Indiegogo campaign to print books ‘Celebrating Differences’ and instilling tolerance of diversity and donate them to schools. Please check it out at link below. The feedback has been so positive from reviewers, kids, parents and teachers. Actually, the campaign was created because many elementary school teachers have requested hardcover versions of these ebooks.