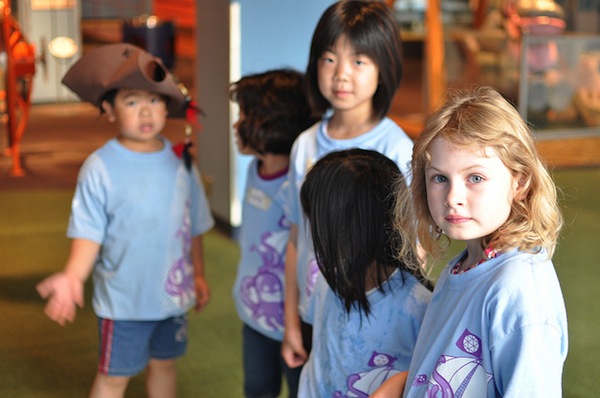 We dedicated all of last week to explore the topic of immersion travel and its amazing benefits in terms of your children’s bilingualism and biculturalism. But if traveling with your family for an extended period of time to a Spanish-speaking country is not an option for you right now, you can always send your kids to a language summer camp without having to travel too far.

Language summer camps are run the same way a regular summer camp is: a bunch of activities both in and outdoors so your kids don’t get bored during the long, lazy summer months, except that everything is done in a language other than English. In other words, not only will the kids be entertained, but they will also be immersed in Spanish or the target language you’re trying to teach them.

I was actually surprised with the amount of options out there and although they are not cheap, some of the programs offer financial assistance in the form of scholarships — particularly the ones where your kids get to sleep over. But maybe I should start by explaining the differences.

A day summer camp is exactly what the name implies. Your child attends camp daily for however many weeks you’re interested in (or you can afford.) Obviously, the longer your child attends, the better the end result. As far as I understand, the daily curriculum is taught in the target language, which depending on the program you choose, can range from Spanish to Arabic. Normally, age requirements are a bit more lax in this type of setting. A couple of summers ago, for example, I sent Vanessa to the language summer camp at Denver Montclair International School, which accept kids as young as 3. By the way, their Spanish program is so popular, it’s pretty much sold out for the entire summer!

Then, you have camps like Concordia Language Villages, which offers both options — day and regular summer camps — and it’s the kind of place that I would love for my kids to go to  when they get older. Concordia has been around for over 50 years, their curriculum is truly impressive and they firmly believe in immersion as the best method to learn a language.

“We communicate with the children almost exclusively in the target language,” according to Carl-Martin Nelson, the director of communications of the Minnesota program. ”There is very little translation going on.”

Children must be 7 years old to attend one of their summer camps in any of the 15 different languages they offer. Each camp can last anywhere from one to four weeks. This means your child is actually away from home for that period of time, just like the thousands of other summer camps that abound in this country, except that they spend their time immersed in the target language.

So how much can your child actually learn in one or two weeks? The truth is probably not much. But if you’re already raising bilingual children, it can be a great way to reinforce the second language— especially when kids get to the bilingual rebellion stage.

“We not only teach kids the language, we improve their attitude about learning the language,” says Nelson. “Our primary goal, our job, is to make it the coolest thing in the world to speak the target language.”

Nelson also brought up the fact that this type of program is perfect for families using the OPOL method because it helps to reinforce the language that the child may only get from one of the parents in a fun and completely different way. The same goes for children who already attend dual language schools. In other words, it’s a great way for them to brush up on their language skills in a non-school setting before the new school year because the emphasis is not only on the physical aspect, but also on the academic one.

“Our experience has been that these kids go back to the classroom excited and enthused about the language they’re learning,” Nelson says.

If like mine, you’re children — or their parents — are not yet ready for sleeping-away camp, look around because in the last few years, we’ve seen an increase in the amount of language summer day camps available in cities across the nation. A great place to start searching for those options is in our bilingual education directory where you can find programs by city and state. If you know of a program that’s not in our directory, we’d really appreciate it if you include it as it’s user-generated. You can also check SpanglishBaby Playground in case anyone has posted about summer camps in their area.

Why We Moved Our Family to Mexico for One Year

Roxana, Thank you so much for mentioning Concordia Language Villages as an option for immersion camps. My husband and I both work there. We met there and were married there. This summer will make 10 years that I will have been on staff at CLV. Obviously it is a hugely important part in our family’s life!
I just wanted to point out that CLV also offers family camps. Offerings vary depending upon which target language you are looking to immerse yourself in; however, there are multiple opportunities for weekend or week long family programs both during the summer and the academic year. Also, the day camp programs are open to children starting at age 6, and there are even some programs offered in the Minneapolis area for those that would prefer a more urban environment.

My son will be two in a few days, but I can’t wait until he is old enough to attend camp at the Language Villages. It is such an amazing and magical place! Last year, I knew my son was going to make progress in his language abilities since he was only 14 months old, but I was pleasantly surprised how much my son’s French improved. I can’t wait to see how much more he gains this summer while we are there.
For our family, traveling right now is not financially possible. Although we would love to be able to visit my husband’s family in Cameroon (West Africa), we just aren’t able to. Thus, Concordia Language Villages still gives us the chance to offer our son an immersion experience in the summers. Like you said, the camp isn’t cheap; however, there are scholarships available.
Thanks again for mentioning Concordia Language Villages.

Thanks for this article, and for those in Southern California, specifically, near Glendale, here is an amazingly creative and innovative Spanish Immersion ARTS CAMP: Caja de Arte! Check it out!!
sign up: http://www.signupgenius.com/go/30E0949ADA78-artbox1
more info: http://www.voxboxarts.com/home.html

It’s the second time when i’ve seen your site. I can see a lot of hard work has gone in to it. It’s really great.

Hi, I do believe this is a great site. I stumbledupon it

I aam going to return once again since i have saved as a favorite it.
Money and freedom is the best way to change, maay you
be ricxh and cintinue to guide othher people.

First off I would like to say excellent blog! I had a quick question in which I’d like to ask
if you do noot mind. I was interested to find outt how you
center yourself and clear your mind prior to writing.
I havve had difficulty clearing my thoughts in getting
myy thoughts out there. I ddo enjoy writig howsever it
just seems lime thhe first 10 tto 15 minnutes aare generaly wated sijply just trying to
figure out how to begin. Any ideas or tips? Appreciate it!

Hi my loved one! I wish to say that this post
is awesome, nice written and include approximately all important infos.
I would like to look extra posts like this .